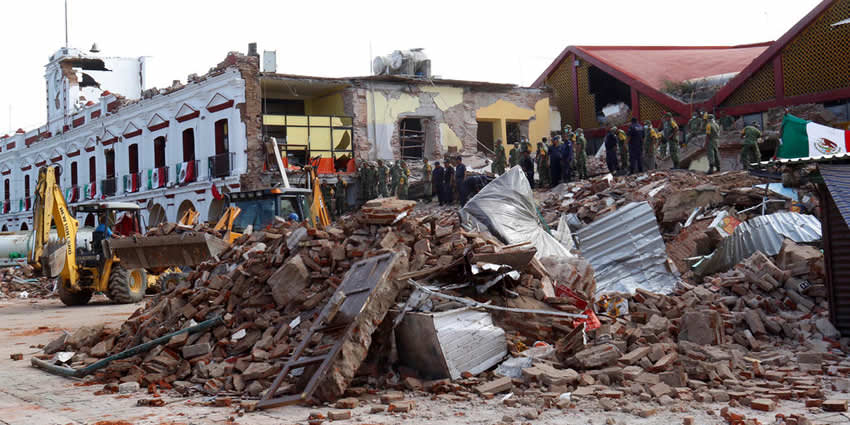 The 2017 Chiapas earthquake struck at 23:49 CDT on 7 September (local time; 04:49 on the 8th UTC) in the Gulf of Tehuantepec off the southern coast of Mexico, near state of Chiapas, approximately 87 kilometres (54 mi) south of Pijijiapan, with a Mercalli intensity of IX (Violent). The magnitude was estimated to be Mw 8.1.

The earthquake caused some buildings in Mexico City to tremble, prompting people to evacuate. It also generated a tsunami with waves of 1.75 metres (5 ft 9 in) above tide level; and tsunami alerts were issued for surrounding areas. Mexico’s president called it the strongest earthquake recorded in the country, in a century. It was also the second strongest recorded in the country’s history, behind the magnitude 8.6 earthquake in 1787, and the most intense recorded globally, so far in 2017.

The Gulf of Tehuantepec lies above the convergent boundary where the Cocos Plate is being subducted below the North American Plate at a rate of 6.4 cm/yr (2.5 in/yr).

On 6 September, several earthquake alarms in Mexico City were mistakenly activated and prompted the evacuation of buildings. The incident prompted a review of the system.

According to the National Seismological Service (SSN) of Mexico, the epicenter was located in the Gulf of Tehuantepec, about 137 kilometres (85 mi) southeast of Tonalá, Chiapas. The United States Geological Survey (USGS) reported that the epicenter was about 87 kilometres (54 mi) southwest of Pijijiapan, Chiapas. The SSN reported a measurement of M 8.2, while the USGS reported a M 8.1 earthquake after correcting an earlier estimate of M 8.0. The earthquake moved the fault between the Cocos and North American plates by up to 10 metres (33 ft).

The earthquake is the most powerful to be measured in Mexico since the 1985 Mexico City earthquake, and is comparable to the 1932 Jalisco earthquakes. Mexican President Enrique Peña Nieto called the earthquake the “largest in at least a century” and claimed that it was felt by 50 million people.

Geophysicists at the National Autonomous University of Mexico speculated that the earthquake relieved stored pressure in the “Tehuantepec gap”, making future earthquakes in the region less likely.

A tsunami with waves of 1 m (3.3 ft) and higher was generated by the earthquake and was recorded at Salina Cruz. A tsunami wave of 1.75 m (5.7 ft) was reported in Chiapas. The Pacific Tsunami Warning Center issued a warning for the entire Pacific coast of Central America, also extending south to Ecuador.

In the hour following the earthquake, at least 12 aftershocks were recorded by the USGS. As of 00:30 September 14 (UTC Time), the National Seismological Service (SSN) has recorded at least 1,806 aftershocks, of up to a magnitude of 6.1.

Within Chiapas, an estimated 1.5 million people were affected by the earthquake, with 41,000 homes damaged. Jose Calzada, Minister of Agriculture, reported that at at least 98 people had died in the earthquake, including 78 in Oaxaca, 16 in Chiapas and 4 in Tabasco. The Secretariat of the Interior declared a state of emergency for 122 municipalities in Chiapas, and the Mexican Army was deployed to aid in disaster relief. Schools were closed on 8 September in 11 states for safety inspections. Damage in Veracruz was reported, meanwhile the state is expecting the arrival of Hurricane Katia on 9 September. Hurricane Max made landfall in Guerrero state on 14 September, near the earthquake-stricken region.

Buildings in Juchitán de Zaragoza, Oaxaca, closest to the epicenter, were “reduced to rubble” according to reports from the town’s mayor.

The earthquake also caused buildings to shake and sway in Mexico City, while also knocking out electricity for 1.8 million people. There were reports of glass shattered at Mexico City International Airport. An under construction highway bridge near Mexico City’s new international airport collapsed due to the shaking.

The epicenter was near Mexico’s border with Guatemala, where the quake was felt in Guatemala City, and infrastructure damage was reported by CONRED in the nation’s south-west. President Jimmy Morales stated that one Guatemalan may have been killed.

On 11 September, Mexico recalled its aid to the United States, offered in the aftermath of Hurricane Harvey, to focus on earthquake recovery.

United States President Donald Trump called Mexican President Enrique Peña Nieto on 14 September, a week after the earthquake, to express his condolences. Trump’s delayed call, which he blamed on cellular signal problems, was criticized by some media outlets in both countries.