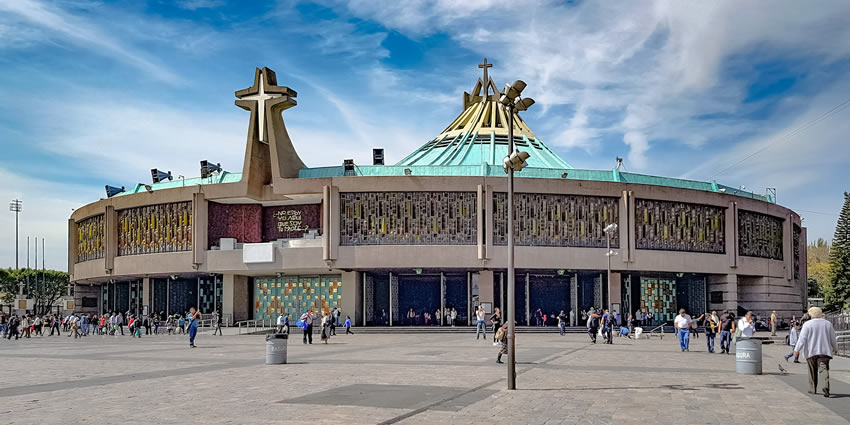 After a heritage of around 700 years, mirrored in the city’s architectural style and existence, Mexico is amongst the most significant metropolises in the world, with a community comprising nearly 22 million people.

Mexico City is home to more than 300 museums, of which the government accredits around a half-dozen. In addition, the city is home to the Chapultepec Forest, the biggest urban park in all of Latin America, and is about equivalent to New York’s Central Park.

Mexico City is teeming with museums, music halls, theaters, historic sites, trade centers, beautiful events, as well as other amusements that combine with vibrant cultural activities throughout the entire year.

Here are some religious sites in Mexico that you should visit.

Both for its religious value and for its architecture, the Metropolitan Cathedral is one of the most important buildings in Mexico City.

It frames the north side of the Zócalo Capitalino, it is the most representative monument of the Historic Center of Mexico City. Its prolonged construction from 1573 to 1813 is a compendium of architectural styles that successively predominated in the New Spanish era.

Its full name is the Metropolitan Cathedral of the Assumption of the Blessed Virgin Mary into the Heavens of Mexico City.

The first stone was laid in 1524 by Hernán Cortés, right at the crossroads of the roads that led to the spiritual center of the Aztecs, that is, where the Templo Mayor gardens are today.

The sanctuary is a temple adjacent to the Metropolitan Cathedral.

It was built between the years 1749 and 1768 and the enclosure fulfills the functions of a parish. Its main portal is of a clear Churrigueresque style, it is made up of two finely sculpted bodies where the 12 apostles are shown, as well as the figure of Saint Joseph.

The lateral façade has the sculptures of Saint Peter and Saint Paul, as well as the four evangelists, and the statue of Saint John the Baptist is located in the niche. Its doors are semicircular.

Inside it has a beautiful neoclassical altar made by Pedro Patiño Ixtolinque and a magnificent anonymous painting of San Cristóbal.

Established in the eighteenth century as a repository for the archbishop’s papers and regalia, the building has since been designated as a UNESCO World Heritage Site and is itself a work of architectural beauty.

The primary temple within the church, which mimics the Altar of the Kings in the surrounding cathedral, is reflected in the adoration chapel design on the front, which has geometrical motifs in the shape of pillars.

Perhaps the most striking aspect of this church is its elevated altar, which has a dozen windows of stained glass in the classical style but is formed of white stone in the style of a Greek cross and is encircled by pillars.

This Roman Catholic cathedral was constructed close to the location where, according to legend, the Virgin Mary had two sightings of an Indian devotee called Juan Diego in December 1531 and afterward ordered the construction of a church.

The Indians of Mexico were converted to Christianity at a rapid pace, and the second apparition led to the creation of a painted picture that has become renowned as the Virgin of Guadalupe.

In 1754, the Virgin of Guadalupe was declared the patron deity and defender of New Spain by a papal bull, and in 1810, when the preacher and revolutionary Miguel Hidalgo y Costilla affixed her image to his flag, she became the emblem of the Mexican independence struggle.

You can see Our Lady of Guadalupe statues everywhere in Mexico – on small altars in people’s homes, altars on street corners, and even posters in mechanic shops and restaurants.

The Monasterio de Santa Veracruz in the historic center of Mexico City is one of the oldest religious establishments in Mexico City and was the third most important church in the area in the 16th century. It was established by a religious brotherhood founded by Hernán Cortés.

The parish church was originally built in 1586, but this building was replaced in the 18th century by the current one.

The old monastery building and the hospital now house the Franz Mayer Museum, but the church still maintains its original function.

Most of its interior decoration has disappeared, but it still houses two important images, the Christ of the Seven Veils and the Virgen de Los Remedios (also called La Gachupina).

The majority of the church’s interior decor has been removed, but two significant images may still be seen inside.

If you look at the structure, you will see that both of its twin spires are leaning in opposite directions. The ground underneath Mexico City is very soft, which has led to the development of buildings that have an inebriated appearance.

This chapel was constructed to honor the Spanish victory at Tenochtitlán.

Even though the Spanish triumphed against the Aztecs here on August 13, 1521, they still incurred severe fatalities, and the church was constructed as a memorial to those comrades who had perished.

San Hipólito, who was soon to become the patron of Mexico City, is shown here as Hernán Cortés atop the Mexican hawk, perched on a prickly pear cactus. Moctezuma and Pedro de Alvarado, both kneel in prayer.