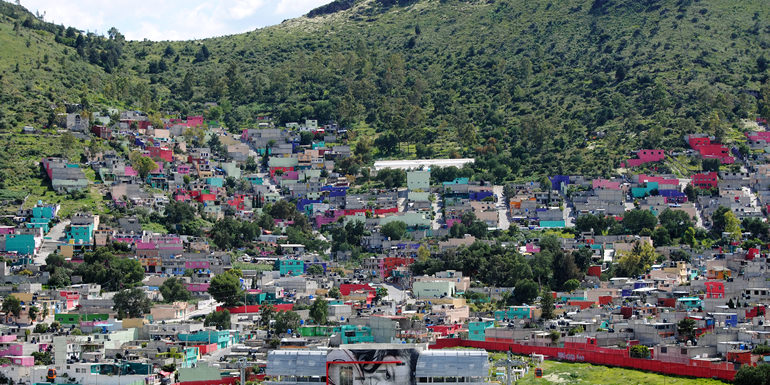 The name “Ecatepec” is derived from Nahuatl, and means “windy hill” or “hill devoted to Ehecatl”. It was also an alternative name or invocation to Quetzalcoatl. “Morelos” is the last name of José María Morelos, a hero of the Mexican War of Independence.

Most inhabitants commute to Mexico City for work, and recently the Mexico City metro subway system was extended into Ecatepec.

“San Cristóbal” (Saint Christopher) is the city’s patron saint, whose feast day is celebrated on July 25 of each year.

The human senttlements in Ecatepec de Morelos are an elongated valley from the Valley of Mexico to Sierra de Guadalupe.

75% of Ecatepec de Morelos municipality is urbanized, on this territory no big animals; in the highlands of Sierra de Guadalupe live principally small mammals as mouse, rabbit, gray squirrel, bat and gopher, birds as cenzontle and sparrow. The flora in Sierra de Guadalupe is interesting, here there are oyamel pines, oaks, ocote pines, century plants, prickly pears, zacatón (mountain grass) and others.

Remains of earliest human inhabitation of the area have been found on the nearby Cerro (Hill) de Ecatepec. The area was initially settled by successive waves of Otomis; however, because of the later arrival of Toltec-Chichimecas that dominated the rest of the Valley of Mexico, this area eventually assimilated to the rest of the Valley, ending with its domination by the Aztec empire. Ecatepec was an Aztec altepetl or city-state in the Valley of Mexico. From 1428 to 1539, Ecatepec was ruled by a tlatoani (literally “speaker”). The tlatoque (plural of tlatoani) of Ecatepec were closely related to the ruling dynasty of Tenochtitlan. – Chimalpilli I, grandson of Moctezuma I. – Tezozomoc, son of Chimalpopoca. – Matlaccohuatl, whose daughter Teotlalco married Moctezuma II. – Chimalpilli II, son of Ahuitzotl. – Diego de Alvarado Huanitzin, grandson of Axayacatl.

Diego Huanitzin was subsequently made tlatoani of Tenochtitlan by Antonio de Mendoza, viceroy of New Spain.

During the Aztec empire, the Mexicas used the town to control trade routes going north.

Ecatepec was considered an “República de Indios” (Indian Republic) 1560, allowing the village to maintain a certain amount of autonomy and keeping the succession of tlatoanis or chiefs. However, in the first part of the 17th century, this was changed to a mayorship, with the Spanish administrating, along with the communities of Zumpango and Xalostoc.

The municipality was officially created on October 13, 1874. On October 1, 1877, San Cristóbal Ecatepec was declared a village and “de Morelos” was added to its name.

The national hero José María Morelos y Pavón was executed in Ecatepec in 1815 by the Spanish during the Mexican War of Independence. The house in which he was executed is now the Museo Casa de Morelos (Museum House of Morelos). Ecatepec was declared a city on December 1, 1980.

In April 1995, the remains of a mammoth were found in Colonia Ejidos de San Cristóbal, where the ancient lakes of Xaltocan-Ecatepec and Texcoco came together and where the Aztecs build a dam to keep the fresh and salty waters separate. The bones have been tentatively dated to around 10,500 years B.C.

Ecatepec de Morelos had a 2010 census population of 1,656,107 inhabitants, which makes it the most populous municipality in the nation , as well as in the state.

In February 2016, Pope Francis celebrated Mass in the city in front of a crowd of 300,000. The Pope’s message was one of encouragement and opposition to the violence and drug trade that permeates the region.

Ecatepec is served by Line B of the Mexico City Metro system, including stations Muzquiz, Ecatepec (a.k.a. Tecnológico), Olímpica, Plaza Aragón, and Ciudad Azteca

In 2016, a new transportation system was introduced to Ecatepec’s inhabitants: Mexicable. This project is a cable car which main purpose is to help people displace faster (contrary to most cable cars which have tourists as their main users), specially in areas with complicated geography. The idea was originally developed in the South Americas, with Colombia being the first country to add a cable car system, called Metrocable, as part of their metro. The Mexicable, the first cable car constructed in Mexico as a public transport, has a length of almost 5 kilometers (3 miles), 190 cars and it runs the entire line in about 17 minutes.