The Guelaguetza Festival in Oaxaca City 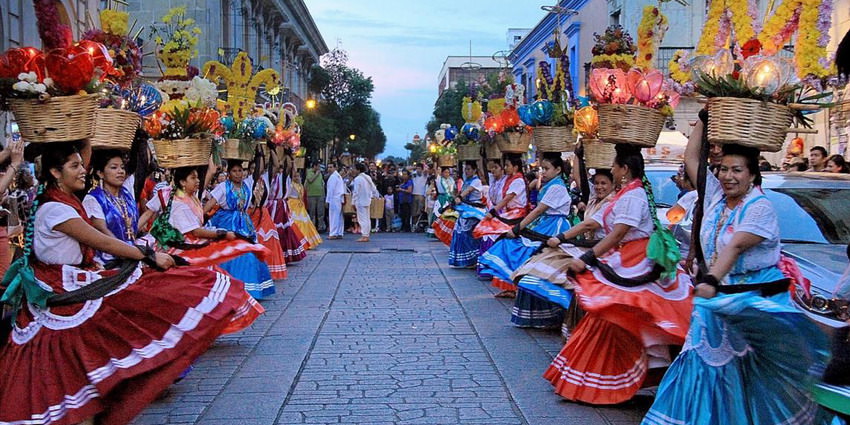 During the month of July, the city of Oaxaca is filled with festivities of intrinsic meaning centered around the renowned Guelaguetza, an event that has been celebrated by the Zapoteca people since before the Spanish conquest.

The Guelaguetza has its roots in the cult of Centeōtl, the goddess of maize, and is the heart of numerous cultural activities and festivities celebrating Oaxaca’s traditions and pride in a scene of color, music, and history.

Guelaguetza is a Zapoteca word meaning “active cooperation” – it is a gift that evokes reciprocity expressed by music, dance, and songs.

The festival, which takes place annually on the two Mondays following July 16th, is part of the Fiestas de Los Lunes del Cerro (“Monday Festivities on the Hill”) in Oaxaca City—a tradition that has been celebrated for more than 500 years.

This is a unique festival with significant historical and cultural roots. The contribution of indigenous culture and traditions is so important during the Lunes del Cerro celebrations, that they have come to be known simply as the Guelaguetza.

The entire city of Oaxaca participates in this event which today, due to Spanish influence, also reflects Christian values centered around Corpus Christi of the Temple of Carmen Alto, built by the Carmelita nuns on the Bella Vista hill.

However, Guelaguetza retains many of the Zapoteca traditions such as being held in July – to coincide with a date on the Zapoteca calendar dedicated to the Centeōtl, the goddess of maize – and the eight-day celebrations are still called the “Octava.”

During the celebrations, groups representing each of the seven traditional regions: Central Valleys, Juarez Sierra, the Glens, Tuxtepec, the Mixteca, and the Coast and the Tehuantepec Isthmus, congregate in the city of Oaxaca.

Each delegation exhibits its cultural heritage with dance, music, and local songs. The traditional gala costumes are also a reflection of their culture and respect for the ceremony.

One of the most noticeable features of the Guelaguetza is the public’s participation. At the end of the performance, each performing group distributes typical items from their region among the spectators.

This offering is also called the Guelaguetza, and is a way for the artists to involve everyone who attends in the joy and meaning of the ceremony – through active cooperation – and in so doing, they also act out one of the most revered values of their indigenous ancestors.

Owing to the enormous enthusiasm from both locals and visitors during the Guelaguetza celebrations, several folkloric shows have been added to support the event. Among them is a parade that is staged by each delegation on the Saturdays before the Monday Guelaguetza.

Known as the Calenda, the parade is led by a Marmota – a huge castle covered in cloth, the “giants,” and “Chinas Oaxaqueñas,” who are local women carrying colorful baskets accompanied by their musical bands.

On the same Saturday as the Calenda parade, a woman is chosen to represent Centéolt, who will preside over the celebrations. This is not a beauty contest; instead, the woman with the most knowledge of her people’s traditions is chosen.

A wide variety of other events also take place in Oaxaca during the two weeks of the Guelaguetza festival, including concerts, conferences, and exhibits of local arts and handicrafts.

These events offer a unique opportunity for visitors to get a feel for the culture and region of Oaxaca as well as acquire unique, hand-made artworks from local artisans.

Since 1997 the country’s Mezcal fair has also been held in the city of Oaxaca during the weeks of the Guelaguetza celebrations.

The festival itself is celebrated on the Cerro del Fortin. A special auditorium built in the 1970s is in place specifically for this celebration. (Other events are held here at other times of the year.)

This outdoor auditorium, which also offers spectacular views over the city, has seating for about 11,000 spectators. There are two shows on each Monday of the Guelaguetza: one at 09:00 and another at 17:00.

Taking sunscreen and a sunhat is advisable, as well as a pair of binoculars or theater glasses if you are situated further back or want to see the detail of the costumes. Ambulant vendors pass by selling refreshments, so take some cash with you for purchases.