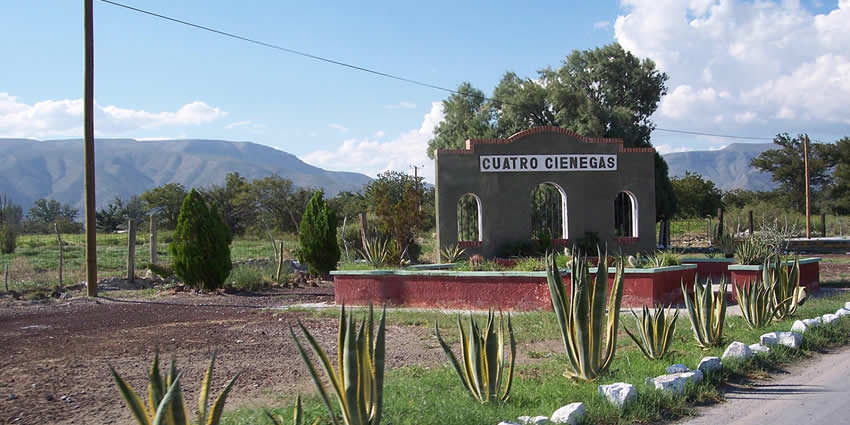 Cuatro Ciénegas is a city in the northern Mexican state of Coahuila.

It stands at an average elevation of 740 metres (2,430 ft) above sea level.
It is located in the state’s desert region (Región Desierto).

Cuatro Ciénegas is Spanish for “four marshes”; the name was chosen by the first settlers because of the natural springs in the vicinity that create extensive areas of wetland and lakes.

Several failed settlements were founded here prior to the successful establishment of a town by Antonio Cordero y Bustamante on 24 May 1800.

The city is formally known as Cuatro Ciénegas de Carranza, in honour of its most famous son: Venustiano Carranza, President of Mexico from 1915 to 1920, who was born there in 1859.

Recently, NASA stated that the biological reserve of Cuatrociénegas could have strong links to discovering life on Mars, since the adaptability of bioforms in the region was unique in the world.

There are some 150 different plants and animals endemic to the valley and its surrounding mountains (e.g., Fouquieria shrevei and Terrapene coahuila), including some 30 aquatic species in the Reserve, eight of which are fish (e.g., Herichthys minckleyi).

Live stromatolites inhabit Cuatro Ciénegas’ pools. These are cyanobacteria colonies, extinct in most of the world, linked to the origin of an oxygen rich atmosphere over 3 billion years ago. A tiny copepod crustacean, Leptocaris stromatolicolus, is known only from the interstices of these stromatolites and bottom sediments in the saline pools.

The pools are an oligotrophic environment with little available phosphate, leading one local bacterial species, Bacillus coahuilensis, to acquire the genes necessary to partially replace its membrane phospholipids with sulfolipids through horizontal gene transfer.

Several environmental conservation leaders are working to protect the valley, including Pronatura Noreste. The organization owns a private reserve, called Pozas Azules, and has several ongoing projects that include the protection of native species, including stromatolites and the eradication of invasive flora and fauna, as well as community development and water efficient agriculture combined with organic techniques.

Cuatro ciénegas has several natural tourist attractions, they include among them the white dunes and many wetlands which have unique ecosystems. The most famous natural attractions are:

Poza Azul is a protected wetland, located 9 km (5.6 mi) from Cuatrociengas seat. It is one of the best known wetlands in Cuatrocienegas. There are a photographic exhibition hall of the flora and fauna of the reserve, viewing platforms, and self-guided trails.

La Poza de la Becerra (Spanish: The Pool of the Calf) is located 16 km (9.9 mi) from the county seat, on road number 30 Cuatrociénegas-Torreon. It is part of the biosphere reserve of Cuatrocienegas. The area contains many species endemic to the region.

Poza Churince is located 18 km (11 mi) from the Cuatrociénegas seat by the federal highway 30 Cuatrociénegas-Torreon. It is an area of Spa-spring waters and varying temperatures.

Las Playitas is a large extension of wetlands located close to the municipal seat.

Also known in Spanish as “Las dunas de yeso”, white dunes cover a large area of white sand that consists of calcium sulfate. They are considered the largest in the country, and the third largest in the Americas.

Other featured wetlands include “Nogalito” and the ecotouristic park “La Ilusión”.
As well as El Entronque and El Mesquite resorts.
The Sierra de la Campana, a mountain range with a huge crater called El hundido is also a tourist attraction.

Cuatro Cienégas is also an important wine-making region, the winery Bodegas Ferrino, founded by a 19th-century Italian immigrant near the town of Cuatro Ciénegas, is the second largest producer of wine in Coahuila, the site attracts many visitors which are immersed in the process of making wine and it offers guide tours around the Cuatro Ciénegas valley.

Scientists working in the basin and some local residents claim to have observed reduced spring discharge and a decrease in surface water in the Cuatro Ciénegas Basin (CCB) in recent years, although these changes have not been well documented in the scientific literature. Some have blamed the possible drying out on changes in climate and others have ascribed it to the introduction of large scale agriculture in adjacent valleys over the past two decades.

Valeria Souza, an ecology professor and researcher at the National Autonomous University of Mexico, found that based on genetic studies of microbes in the CCB and surrounding valleys, the aquifer extends far beyond the CCB and includes adjacent valleys. She published her results in the Proceedings of the National Academy of Sciences in April 2006. Regarding the source of drying out, she wrote: “Similar to situations occurring with increasing frequency in various arid regions of the world, agricultural development and associated water extraction in the region have placed new pressures on the ecological integrity of the unique ecosystems of Cuatro Ciénegas.”

Research by hydrogeologist Brad Wolaver at the University of Texas at Austin, now at Flinders University, also found evidence that the aquifer supplying the water that emerges at the surface of the Cuatro Ciénegas Basin extends far beyond the basin and thus is potentially impacted by agricultural water extraction in adjacent valleys.