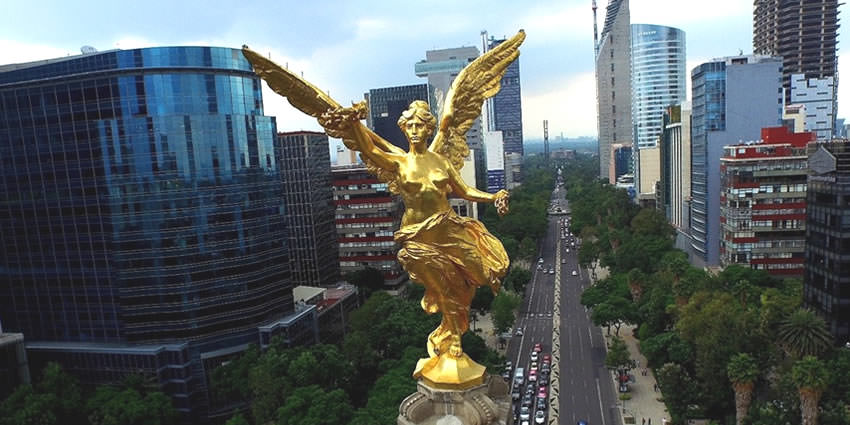 The Angel of Independence, most commonly known by the shortened name El Ángel and officially known as Monumento a la Independencia (“Monument to Independence”), is a victory column on a roundabout on the major thoroughfare of Paseo de la Reforma in downtown Mexico City.

El Ángel was built in 1910 during the presidency of Porfirio Díaz by architect Antonio Rivas Mercado, to commemorate the centennial of the beginning of Mexico’s War of Independence. In later years it was made into a mausoleum for the most important heroes of that war. It is one of the most recognizable landmarks in Mexico City, and it has become a focal point for both celebration and protest. It resembles the July Column in Paris and the Berlin Victory Column in Berlin.

The base of the column is quadrangular with each vertex featuring a bronze sculpture symbolizing law, war, justice and peace. Originally there were nine steps leading to the base, but due to the sinking of the ground, an ongoing problem in Mexico City, fourteen more steps were added.

On the main face of the base facing downtown Mexico City, there is an inscription reading La Nación a Los Héroes de la Independencia (“The Nation to the Heroes of Independence”). In front of this inscription is a bronze statue of a giant, laureled lion that guides a child, which symbolizes, according to Rivas Mercado, “the Mexican people, strong during War and docile during Peace.”

Next to the column there is a group of marble statues of some of the heroes of the War of Independence. The column itself is 36 metres high. The structure is made of steel covered with quarried stone decorated with garlands, palms and rings with the names of Independence figures. Inside the column is a two-hundred step staircase which leads to a viewpoint above the capital. The Corinthian-style capital is adorned by four eagles with extended wings from the Mexican coat of arms used at the time.

Crowning the column there is a 6.7 metres statue by Enrique Alciati of Nike, the Greek goddess of Victory. Like other similar victory columns around the world, it is made of bronze, covered with 24k gold (restored in 2006) and weighs seven tons. In her right hand the Angel, as it is commonly known, holds a laurel crown symbolically above both Miguel Hidalgo’s head and the nation below, symbolizing Victory, while in her left she holds a broken chain, symbolizing Freedom.

Construction of the column of independence topped by a depiction of winged victory was ordered in 1900 by President Porfirio Díaz. Antonio Rivas Mercado began to design the monument, envisioned as a column with both classical and modern elements, with bronze statues at its base. The foundation stone was laid on January 2, 1902.

Placed in it a gold chest with a record of independence and a series of coins minted in that epoch. But in May 1906, when the foundations were built and 2,400 stones placed to a height of 25 m, the sides of the monument collapsed, so Díaz created a study commission composed of engineers Guillermo Beltrán y Puga, Manuel Marroquín y Rivera, and Gonzalo Garita. The commission determined that the foundations of the monument were poorly planned, so it was decided to demolish the structure. The work was restarted under the supervision of a steering committee composed of engineers Beltran y Puga, Marroquin y Rivera and the architect Manuel Gorozpe, leaving the artwork in the care of architect Antonio Rivas Mercado. All the sculptures were made by Italian artist Enrique Alciati. One of the faces in the doors is of one of Rivas Mercado’s daughter, Antonieta.

The monument was completed in time for the festivities to commemorate the first hundred years of Mexican Independence in 1910. The inauguration was held on 16 September, the 100th anniversary of the Grito de Dolores, the shout by Father Miguel Hidalgo that was considered the initiation of Mexican independence. The ceremony was attended by President Díaz and many foreign dignitaries. Some 10,000 Mexican soldiers and contingents of foreign military forces helped mark the occasion. The main speaker at the event was Mexican poet Salvador Díaz Mirón.

An eternal flame (Lámpara Votiva) honoring these independence heroes was installed in the base of the column at the order of President Emilio Portes Gil in 1929.

The monument suffered some damage during an earthquake on July 28, 1957 when the sculpture of the Winged Victory fell to the ground and broke into several pieces. Sculptor José Fernández Urbina was in charge of the restoration, which lasted more than a year. The monument was reopened on September 16, 1958. It survived the devastating earthquake of September 19, 1985 with some damage to the staircases and the reliefs, but none to the Angel.

On August 16, 2019, following feminist demonstrations against gender-based violence and feminicides, the monument was affected due to acts of vandalism and graffiti. The Government of Mexico City closed access for an indefinite period; but it is estimated that it could be between one to two years. However, the capital government declared justifying that the closure is due to the restoration, within the framework of a work program in Paseo de la Reforma that involves several more monuments.

In 1925, during the administration of Plutarco Elías Calles, the remains of the following Heroes of the Mexican Independence were interred in a mausoleum under the base of the monument. At the entrance to the mausoleum is a statue of William Lamport, also known as Don Guillén de Lampart y Guzmán, an Irishman who was tried by the Mexican Inquisition in the mid-seventeenth century, following the discovery of his plot to achieve the independence of New Spain. He was released by the inquisition to secular authorities and executed in the auto de fe of 1659, with his remains forbidden burial in sacred ground.

The actual remains of insurgents are buried in the mausoleum:

Absent from the mausoleum is Agustín de Iturbide, who achieved Mexico’s independence from Spain in 1821; his remains are in the Metropolitan Cathedral of Mexico City. President Calles excluded Iturbide when other insurgents’ remains were transferred to the mausoleum in 1925.

More than 60 years after the mausoleum was erected, on September 16, 1998 it was permanently opened to the public by President Ernesto Zedillo and Cuauhtémoc Cárdenas, Head of Government of the Federal District.

On May 30, 2010, as part of the Bicentennial celebrations of the War of Independence, the remains of the National Heroes were exhumed and then escorted by the Armed Forces with full military honors to the National History Museum in Chapultepec Castle, where they were subject of studies by members of the National Institute of Anthropology and History. After these studies, the remains were temporarily exhibited at the National Palace until August 2011, when they were returned to the mausoleum.

Visitors are allowed to enter the monument, view the memorial plaques at the base level, and climb to the top of the tower. The entrance is free. To go up people must get a permit at the Cuauhtémoc borough where you must show ID. Groups of no more than 6 are then allowed into the monument for about 15 minutes. There are 200 stairs, and the climb is arduous. The first approximately 15 stairs, in the base, are wide and comfortable. The stairs in the column itself, approximately 185, are circular, metal, very narrow and without a landing or resting point until one reaches the top. Visitors who are not in good physical shape will find the climb exhausting—it is the equivalent of climbing a 14-story building in one go, and those not comfortable with tight spaces should avoid the climb as there is insufficient room to allow others to bypass. Some areas of the staircase are very dark, and there are only a few slits to let in light. The top balcony, though narrow, offers a commanding view of the wide avenues that surround the column. The return trip down is by way of the same circular staircase.