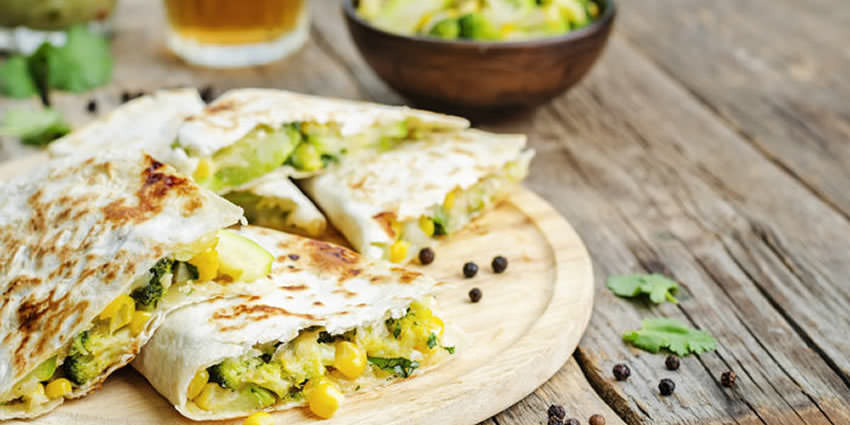 The quesadilla is a Mexican dish that consists of a corn or wheat tortilla, folded in half. It should be eaten hot, either fried or cooked on the griddle or skillet.

In the Metropolitan Zone of the Valley of Mexico, the term ‘quesadilla’ refers to folded corn tortillas that can carry more ingredients besides cheese or even dispense with it.

In most of the states of Mexico, only those prepared exclusively with cheese as a base ingredient are considered quesadillas, to which different stews or additional ingredients can be added, then acquiring the name of “quesadilla de…” (plus ingredient or stew added).

While in the rest of the country, quesadillas are usually prepared using cheese as a basic and indispensable ingredient, and may or may not contain additional ingredients.

In northwestern and northern Mexico, quesadillas (preferably with wheat flour tortillas) are grilled or skillet, in addition to melted cheese they are usually accompanied by various ingredients.

While in the center and south of the country, they are almost exclusively made with corn tortillas, either yellow or blue.

A quesadilla should be folded in half in the form of a half-moon. If they are not folded and the cheese (and extras) are placed between two open tortillas, then they are called “synchronized”. The “synchronized quesadillas” can also be made with wheat flour or corn tortillas.

These quesadillas are usually consumed with multiple sauces or additions in order to highlight the flavor without altering their nomenclature, some of these additions are guacamole, spicy sauce, pico de gallo sauce, tanned or acitroned onion, lettuce or chopped cabbage, etc.

Quesadillas can be prepared with any cheese: Oaxaca cheese or quesillo, Chihuahua cheese, Manchego cheese, panela cheese, fresh cheese, cottage cheese, and so on.

Depending on the region, the quesadilla may be filled with cheese or other ingredients.

In the northwestern states of Mexico, weathered fish or shellfish quesadillas, made in the style of Ensenada, Baja California, which are usually accompanied by sauces, lettuce, onion, and guacamole are common.

In Sinaloa, there is a special variety called governor taco, which consists of a grilled quesadilla made with corn tortilla, which is heated until roasted and filled with shrimp crush.

In Sonora, quesadillas stuffed with roasted meat, made from corn or wheat tortillas, can also be made in golden or grilled tortillas, with gratin cheese and the meat on top with cabbage, sauces, guacamole, and onions roasted

In Ciudad Victoria, Tamaulipas, quesadillas stuffed with different stews are common, such as Green Sauce, Shredded, Minced Pork, and Cochinita Pibil among others; made of flour tortilla, between 5 to 6 inches in diameter.

Normally with asadero or manchego cheese. Accompanied by a side of cabbage/lettuce and tomato. In this same place, the Flutes are made of Flour Tortilla with a stew inside, without frying.

In the Valley of Mexico

Quesadillas in the area of ​​the Valley of Mexico are one of the most popular street foods and are made from dough or raw cornmeal dough, first modeling the tortilla and adding the ingredient to cheese that can be potatoes, mushrooms, huitlacoche, chorizo, jalapeño pepper in rajas, quelites, pork rinds, beef brains, mince made from ground beef or pork, tinga, etc.

Sometimes this ingredient is seasoned with onion, garlic, and/or epazote, and then fold the tortilla in half when it is still raw, and at the end, it is fried in a pan. When the dough is raw, during the dubbing the edges of the tortilla are joined, and the contents are completely sealed, which allows uniform frying whose final result is similar to a crumb of crumbs but having a crescent shape instead Round, it is more similar to a pie.

In this case, there is also an additional variant in which it is roasted or passed through the comal like a corn tortilla or a huarache, the tortilla dough is not fried so that the resulting quesadilla is of a slightly toasted consistency and low fat, which makes it increasingly popular among people looking to take care of their diet.

In the north of Mexico

In the northern states of Mexico, there is a variant that is made with extended corn tortillas and grilled toast, without bending, on which cheese and other ingredients are placed. This variant acquires different names, depending on the state: vampires, pirates, or dripping.