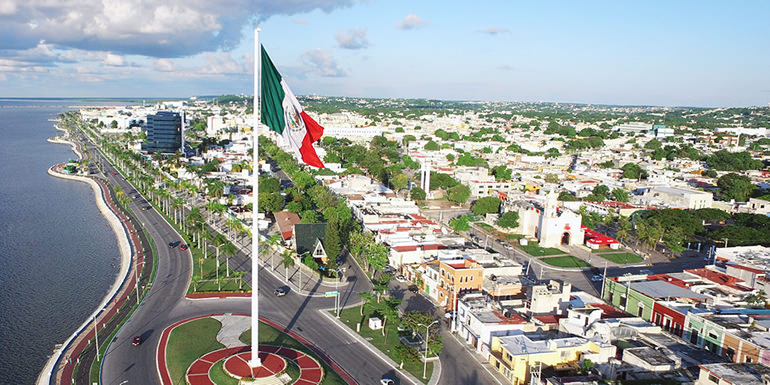 San Francisco de Campeche (“Ahk’ìin Pech” in yucatec maya language) is a city in the state of Campeche.

Campeche located on the shore of the Bay of Campeche of the Gulf of Mexico and also serves as the state’s capital city.

The city retains many of the old colonial spanish city walls and fortifications which protected the city (not always successfully) from pirates and buccaneers. The state of preservation and quality of its architecture earned it the status of a UNESCO World Heritage Site in 1999.

Originally, the spaniards lived inside the walled city, while the natives lived in the surrounding barrios of San Francisco, Guadalupe and San Román. These barrios still retain their original churches; the one in Guadalupe is almost 500 years old.

Campeche has a tropical savanna climate, with most rain falling in the wet season from June to October.

The name of Campeche is derived from the Maya name of a settlement called “Ah-Kin-Pech” where the city of Campeche is now. The native name means “place of snakes and ticks”.

When the Spanish first arrived to the area in 1517, they called it Lazaro, since “the day of our landing was St. Lazarus’ Sunday”.

The city was founded in 1540 by spanish conquistadores as San Francisco de Campeche atop the pre-existing Maya city of Ah Kim Pech.

The Pre-Columbian city was described as having 3,000 houses and various monuments, of which little trace remains.

Founded in 1540 by Francisco Montejo, Campeche was terrorized by pirates and marauders until the city started fortification in 1686.

San Francisco de Campeche was originally an indigenous village, Ah Kim Pech, where the spanish first landed in Mexico in 1517.

The city of Campeche was founded in 1540 and fortified against pirates during the 17th century. It still has the appearance of a fortress. Historical monuments and buildings, such as the Franciscan cathedral, old Maya ruins, and the old city walls and forts, attract many tourists.

The fortifications system of Campeche, an eminent example of the military architecture of the 17th and 18th centuries, is part of an overall defensive system set up by the Spanish to protect the ports on the Caribbean Sea from pirate attacks like the 1663 Sack of Campeche.

The state of preservation and quality of its architecture earned it the status of a World Heritage Site in 1999.

The city of Campeche is an example of urbanism in a baroque colonial city, with a reticular and regular plan, its urban trace, a model of colonial port cities, reflects the main role that it played as a commercial, religious and military connection point characterized by its high level of integrity and homogeneity.

More than one thousand buildings with a historic value have survived as witnesses of space and temporal superimposition of several significant historic periods of Mexico.

The French engineer Louis Bouchard de Becour was commissioned to unify all the defensive works that surrounded the city with a wall. At its completion, the wall surrounding the city of Campeche was 2,560 meters in length, forming an irregular hexagon around the main part of the city, with eight defensive bastions on the corners. These bulwarks now serve different functions:

It also contained four gates to allow access to the main quarters.

The Land Gate is kept as a tourist attraction, having a light and sound show three nights each week and keeping original supplies and items from the 17th century.

The other gates were Guadalupe and San Román, connecting to the outside neighborhoods.

Additionally, two main forts protected the city from two nearby hills on each side, the forts of San José el Alto (built in 1762) and San Miguel.

These forts gave long-range artillery coverage and served also as look-outs. They were built before the walls of the city.

The fort of San Miguel is used as a museum and houses a collection of pre-Hispanic items.

The fort of San José houses a collection of boats and weapons of the period.