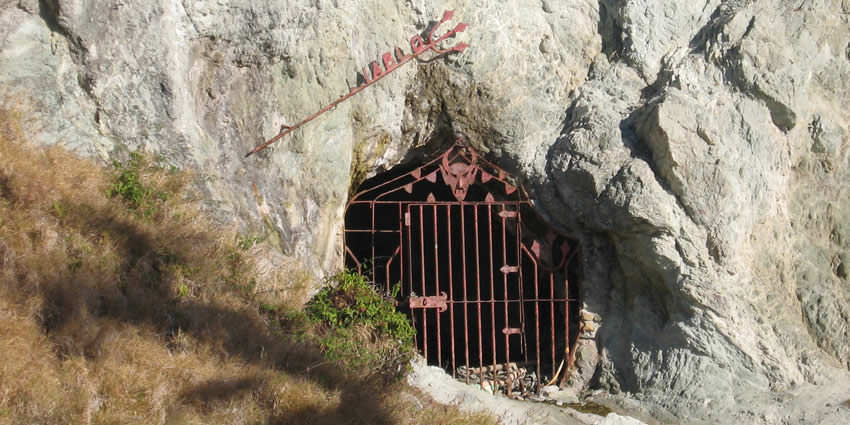 One of the most visited tourist attractions in Mazatlan due to its mystery and antiquity is the Cueva del Diablo (“Devil’s Cave”), a place that is sheltered by the slopes of the Cerro de la Nevería and which is located on Paseo Claussen.

It is a place that for more than 200 years has been surrounded by tales and legends that the Mazatlecos continue to share from generation to generation.

In the holiday season, the Devil’s Cave is very visited, because, at first sight, it catches the attention of tourists by the image of the “devil” that holds the red gate that was installed in the entrance to avoid the passage inside the cave, which is very short.

There are many legends around this space, ranging from that was used by pirates to keep their treasures to the story that says that in that place the devil was released when work was done at the foot of the hill of the Nevería to make longer the boardwalk where the workers claimed that the devil was heard inside.

The rumor also runs between the grandparents who dare to enter it are prisoners until the next day, and they always leave very frightened smelling of sulfur.

Another legend is that on a carnival night two people, not finding a bathroom to relieve themselves, entered the cave and that they saw them leave it.

They also say that some curious people decided to go to that cave and never saw them again. However, the only truth that has been documented is that it served as a dynamite deposit when the Cerro de la Nevería was used to extract the material with which the Olas Altas jetty was built, it was the smell of sulfur that came out of that tunnel what led to his baptism as la Cueva del Diablo.

Many stories will be told, some fantasies others true but without a doubt that is what makes it a place that nobody should miss during his visit to Mazatlan.