Bacalar Lagoon and The Pirate Canal 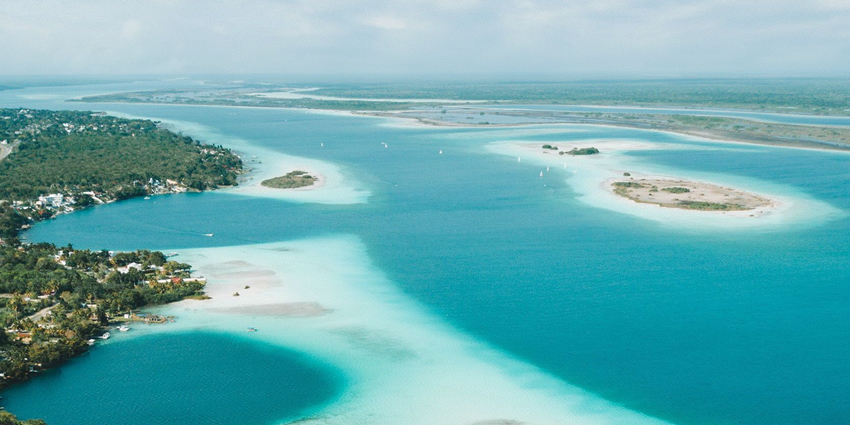 The Bacalar lagoon, also known as the Lagoon of Seven Colors, owes its name to the seven shades of blue which occur due to the water having many different depths.

Known today for its laid-back atmosphere, serenity, and wellness, as well as lounging in a hammock while sipping on a mango smoothie, the history of Bacalar is full of swashbuckling adventure & chaos.

With its length of 42 km, it is the largest lagoon in the Yucatan peninsula, containing a handful of small islands and 4 cenotes (Cenote Negro, Cenote Esmeralda, Cenote Cocalitos, and Cenote Azul).

All these cenotes form natural swimming pools surrounded by vegetation and mangroves. Close to shore, many areas of the lagoon are shallow, where the crystal clear waters make bathing idyllic.

The Pirate Canal is a must-see in Bacalar, as no trip is complete without a sailing trip across the beautiful waters to where the canal begins. You can admire the multiple shades of blue and green, swim & relax in the clear shallow waters.

There are numerous Mayan sites close to the lagoon, like Chacchoben or the recently excavated Ichkabal. These towns also used the channel as a means to navigate out to the sea and trade with other towns and cities up and down the coast.

Bakhalal (the Mayan period’s name of Bacalar) is even mentioned in Mayan chronicles as an area where the Itzaes lived for a time before they traveled north to found the famous city of Chichén Itzá.

Mexico Kan Tours runs a private tour to Bacalar, including a 3-hour sailboat tour of the Bacalar Lagoon and Pirate Canal with time to swim and relax, as well as lunch and a chance to explore this place.

The name of Bacalar comes from the Mayan period, called Bakhalal – meaning “place of reeds”.

Later, in colonial times, a site on the lagoon was chosen to find a town, located directly in front of the channel that connects the lagoon through winding mangrove passages out to the sea.

Spaniards were famous at the time for transporting ships full of silver and gold from the New World back to Spain, and the whole Caribbean became a magnet for pirates, corsairs, buccaneers, and all sorts of bandits and castaways.

They would routinely sail up the channel to attack the town, giving the channel its name “El Canal de Los Piratas” (“The Pirate Canal”). In fact, among them were famous people like Henry Morgan and Francis Drake.

After the Spanish conquest, the area became increasingly depopulated due to conflict, slavery, and the spread of disease. This meant there was no large native town to attack or exploit, so the Spanish did not pay much attention to this part of their territory.

In 1640, the Scotsman Peter Wallace was the first buccaneer to reach Bacalar. He was interested in logwood (Haematoxylum campechianum), known locally as ‘Palo de Tinte’ or ‘Palo de Campeche’.

This is a tree highly valued at that time from which red, black, and blue dyes were extracted. These dyes were widely used for coloring fabric and sold on the European market to textile merchants.

Wallace settled in this area for more than a decade, until the arrival of Diego el Mulato, who sacked the settlement.

Afterward, there were repeated visits by English, French, and Dutch bandit ships fighting to control the traffic of logwood and tropical hardwoods such as mahogany, also common in the area.

Faced with these attacks, Bacalar was fortified with the building of the fort of San Felipe in 1729.

The English buccaneers began setting up permanent camps further south in what became their colony of British Honduras (now Belize). The importance of logwood dropped in the 19th century, and the area was no longer of interest to pirates.

In the 1840s the Caste War of Yucatan broke out, an event of huge historical significance for the region, one of the implications being that all of the eastern peninsulae became a no-go area for anyone not allied with the Mayan rebels.

Interestingly, the Mayas occupied Bacalar as they would exchange their local hardwoods with the English in Belize for ammunition to fight the Mexican government.

This place was re-taken by Mexico in 1902 and the town of Chetumal was founded nearby, closer to the border with Belize, from where the government had better control of the frontier.

Slowly, Chetumal grew and became the more important town of the two. While the latter has become the state capital, Bacalar has grown very slowly, remaining a sleepy village until more recently.

Steadily over the last 20 years, the wondrous lagoon has once again drawn travelers from all over the world as new visitors explore the area of the Bacalar Lagoon and the Pirate Canal.

Access to the channel is public and free (but you need to cross the water!).

To get to the Pirate Canal you can: