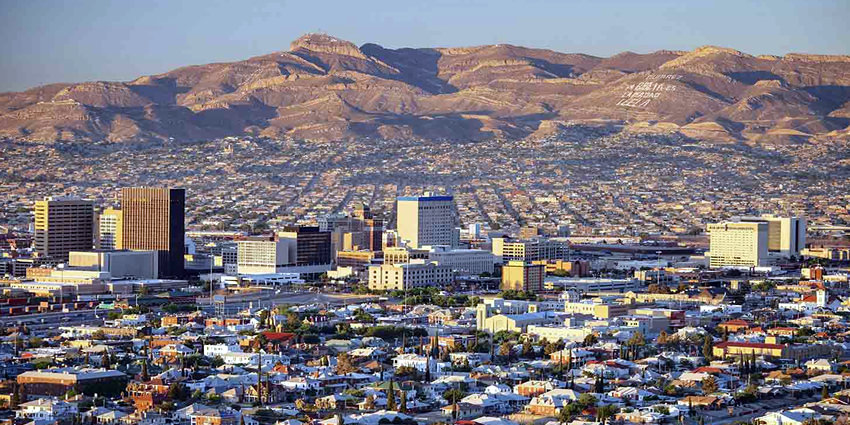 Ciudad Juárez is the largest city in the Mexican state of Chihuahua. Commonly referred to by locals as simply Juárez, and known as Paso del Norte (Pass of the North) until 1888, Juárez is the seat of the municipality of Juárez with an estimated population of 1.5 million people.

Together with the surrounding areas, the cities form El Paso–Juárez, the second largest binational metropolitan area on the Mexico–U.S. border (after San Diego–Tijuana), with a combined population of over 2.7 million people.

There are four international ports of entry connecting Ciudad Juárez and El Paso, including the Bridge of the Americas, Ysleta International Bridge, Paso del Norte Bridge and Stanton Street Bridge.

These combined allowed 22,958,472 crossings in 2008, making Ciudad Juárez a major point of entry and transportation into the U.S. for all of central northern Mexico.

Due to its location in the Chihuahuan Desert and high altitude, Ciudad Juárez has a cold desert climate.

Seasons are distinct, with hot summers, mild springs and autumns, and cold winters.

Rainfall is scarce and greater in summer.

Between the 1960s and 1990s, Juárez saw a high level of population growth due in part to the newly established maquiladoras.

The end of the Bracero Program also brought workers back from border cities in the U.S. through Ciudad Juárez, contributing to the growing number of citizens.

The Franciscan friars established a community that grew in importance as commerce between Santa Fe and Chihuahua passed through it.

The wood for the bridge across the Rio Grande first came from Santa Fe, New Mexico in the 18th century.

The original population of Suma, Jumano and immigrants brought by the Spanish as slaves from Central New Spain grew around the mission.

In 1680 during the Pueblo Revolt, some members of the Tigua branch of the Pueblo became refugees from the conflict and a Mission was established for them in Ysleta del Paso del Norte.

The population of the entire district reached some 5,000 around 1750, when the Apache attacked the other native towns around the missions.

The 1848 Treaty of Guadalupe Hidalgo established the Rio Grande as the border between Mexico and the United States, separating the settlements on the north bank of the river from the rest of the town.

Such settlements were not part of the town at that time; as the military set up its buildings the town grew around it. This would later become El Paso, Texas.

From that time until around 1930 populations on both sides of the border could move freely across it. Ciudad Juárez and El Paso are one of the 14 pairs of cross-border town naming along the Mexico–U.S. border.

During the French intervention in Mexico (1862–1867), El Paso del Norte served as a temporary stop for Benito Juárez’s republican forces until he established his government-in-exile in Chihuahua.

After 1882 the city grew with the arrival of the Mexican Central Railway. Banks, telegraph, telephone, and trams appeared, indicating the city’s thriving commerce, in the firm control of the city’s oligarchy of the Ochoa, Samaniego, Daguerre, Provencio, and Cuarón families.

In 1888, El Paso del Norte was renamed in honor of Juárez.

The Escobar brothers founded the city’s first institution of higher education in 1906, the Escuela Particular de Agricultura. That same year, a series of public works are inaugurated, including the city’s sewage and drainage system, as well as potable water.

A public library, schools, new public market (the old Mercado Cuauhtémoc) and parks dotted the city, making it one of many Porfirian showcases.

Modern hotels and restaurants catered to the increased international railroad traffic from the 1880s on.

In 1909, Díaz and William Howard Taft planned a summit in Ciudad Juárez and El Paso, an historic first meeting between a Mexican and a U.S. president, and also the first time a U.S. president would cross the border into Mexico. But tensions rose on both sides of the border over the disputed Chamizal strip connecting Ciudad Juárez to El Paso, even though it would have been considered neutral territory with no flags present during the summit.

The Texas Rangers, 4,000 U.S. and Mexican troops, U.S. Secret Service agents, FBI agents and U.S. marshals were all called in to provide security. Frederick Russell Burnham, the celebrated scout, was put in charge of a 250 private security detail hired by John Hays Hammond.

On October 16, the day of the summit, Burnham and Private C.R. Moore, a Texas Ranger, discovered a man holding a concealed palm pistol standing at the El Paso Chamber of Commerce building along the procession route. Burnham and Moore captured, disarmed, and arrested the assassin within only a few feet of Díaz and Taft.

The city was Mexico’s largest border town by 1910—and as such, it held strategic importance during the Mexican Revolution. In May 1911, about 3,000 revolutionary fighters under the leadership of Francisco Madero laid siege to Ciudad Juárez, which was garrisoned by 500 regular Federal troops under the command of General Juan J Navarro.

Navarro’s force was supported by 300 civilian auxiliaries and local police. After two days of heavy fighting most of the city had fallen to the insurrectionists and the surviving federal soldiers had withdrawn to their barracks. Navarro then formally surrendered to Madero.

The capture of a key border town at an early stage of the revolution not only enabled the revolutionary forces to bring in weapons and supplies from El Paso, but marked the beginning of the end for the demoralized Diaz regime.

During the subsequent years of the conflict, Villa and other revolutionaries struggled for the control of the town (and income from the Federal Customs House), destroying much of the city during battles in 1911 and 1913.

Much of the population abandoned the city between 1914 and 1917.

Tourism, gambling, and light manufacturing drove the city’s recovery from the 1920s until the 1940s.

A series of mayors in the 1940s–1960s, like Carlos Villareal and René Mascareñas Miranda, ushered in a period of high growth and development predicated on the PRONAF border industrialization development program. A beautification program spruced up the city center, building a series of arched porticos around the main square, as well as neo-colonial façades for main public buildings such as the city health clinic, the central fire station, and city hall.

The Cathedral, built in the 1950s, gave the city center the flavor of central Mexico, with its carved towers and elegant dome, but structural problems required its remodeling in the 1970s.

Juárez has grown substantially in recent decades due to a large influx of people moving into the city in search of jobs with the maquiladoras.

As of 2014 more technological firms have moved to the city, such as the Delphi Corporation Technical Center, the largest in the Western Hemisphere, which employs over 2,000 engineers. Large slum housing communities called colonias have become extensive.

Juárez has gained further notoriety because of violence and as a major center of narcotics trafficking linked to the powerful Juárez Cartel, and for more than 1000 unsolved murders of young women from 1993 to 2003.

The main public transportation system in the city is the Public Bus System. The public buses run the main streets of Cd. Juárez throughout the day, costing seven pesos (less than 40 cents) to ride one. Due the aging current bus fleet being considered potentially outdated, the Municipal Government is working on replacing the buses with new ones, along with improving the bus stops, such as by equipping them with shade.

The ViveBus Bus Rapid Transit (BRT) system opened to the public in November 2013 with the first route of five planned. The project was made a reality with the collaboration of the local municipal government, the private enterprise of Integradora de Transporte de Juarez (INTRA) as well as other city government agencies. Studies have shown that the current bus system averages 8 mph (13 km/h) while the new system is projected to average 16 mph (26 km/h). The BRT system studies conducted by the Instituto Municipal de Investigacion Y Planeacion project a daily ridership of 40,000.

The first of the five routes opened to users in late 2013 and is officially named Presidencia-Tierra Nueva and has 34 stations distributed along the north to south corridor. The route starts at Avenida Francisco Villa, follows north to Eje Vial Norte-Sur then veers left at Zaragoza Blvd. and ends at Avenida Independencia and the elevated Carretera Federal 2.

The first bridge to cross the Rio Grande at El Paso del Norte was built in the time of New Spain, over 250 years ago, from wood hauled in from Santa Fe. Today, this bridge is honored by the modern Santa Fe Street Bridge, and Santa Fe Street in downtown El Paso.

There is also a land crossing at nearby Santa Teresa, New Mexico, and the Fabens–Caseta International Bridge in nearby Fabens, Texas.