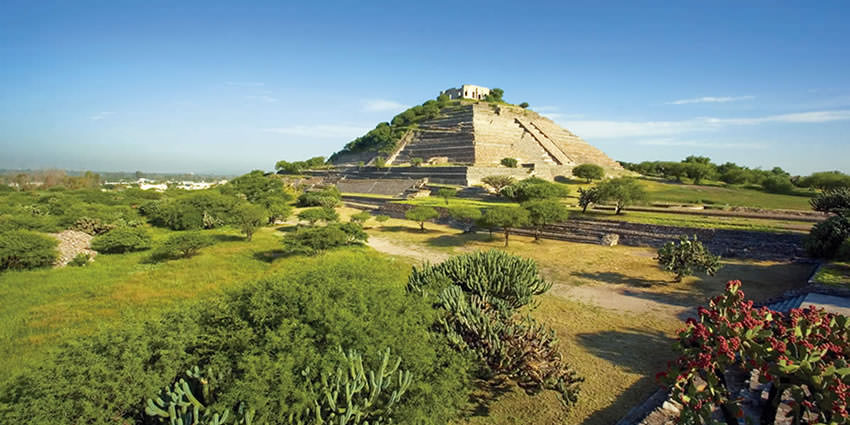 The Cerrito is an archaeological zone in Queretaro State.

As a place of worship was venerated by local cultures (Chupícuaro) as well as Teotihuacan’s, Toltec, Chichimeca, Otomi and Purépecha, as late as 1632.

The first Querétaro human settlements are related to the Chupícuaro culture, which originated in the margins of the Lerma River, in the current Acámbaro, Guanajuato. This presence is more noticeable and early in San Juan del Río and Querétaro. Chupícuaro culture had a simple low platform architecture, very elaborated funeral rites, and very elaborated pottery decoration. Material evidence of this culture has been registered on sites located in the skirts of the Cimatario Hill on the banks of the Pueblito River.

Magdalena to the west and La Griega, to the east, are further evidence of this culture in the Valley of Querétaro. The earliest settlements in Querétaro were related and contemporary to the Chupícuaro culture in the mesoamerican preclassical period. From the social, political and territorial structure of Chupícuaro, inhabitants of the Querétaro region developed their own cultural expressions within the context of the Mesoamerican civilization.

Its name comes from the identification of the site with its main structure, a pyramidal basement 30 meters high.

Throughout the 16-18 centuries the site received several names. It is very likely that the Otomi and Chichimeca inhabitants of the Queretaro Valley towards the end of the 16th century, have called the site San Francisco Anbanica (which means “high temple” in Otomí).

Towards the end of the 18th century, it was named “El Cerrito de Cascajo”. On the other hand, in some photographs of the early 18th century (located in the INAH photo library), they bear the name of “El Cerrito Pelón” as a legend.

In the assignment of his name, it will also be necessary to consider the landslides on the faces of the pyramidal basement, which left exposed its core of earth and stone, on which the vegetation grew, giving it for many years the natural appearance of a hill.

Currently receives the popular name of the Pyramid of the Pueblito.

Since 300 BCE, The Chupicuaro culture settled in the region, followed by the Teotihuacan and Toltec, and then the chichimeca and Otomi, immediately prior to Spaniard’s arrival at the valley of Queretaro.

Towards 400 CE, the Altépetl, the ceremonial center and its pre-Hispanic urban zone, becomes the political and religious capital of several peripheric settlements.

El Cerrito had a long history as a regional political and religious center and was contemporary of Teotihuacan and Tula. As a regional capital, it had a series of urban religious and residential complexes in Cerro Gordo, Balvanera, La Magdalena, Santa Barbara, La Negreta and the banks of the River El Pueblito.

El Cerrito functioned as a regional political and religious center of regional importance from 400 to 1500 CE. Its apogee occurred in the postclassical period, from 450 to 850 CE, during the Toltec culture influence of the center.

Over time, El Cerrito became a sacred space or sanctuary. The buildings and altars around the pyramid are expressions of religious activities around the worship of a female deity, probably the old mother or mother of the gods.

During the Spaniard’s arrival, it was populated by Chichimecas, a sedentary and semi-nomadic culture, with the addition of Otomi and Purépecha.

The most intense occupation period is associated with the Toltec culture in the early postclassical (900-1200 CE). El Cerrito is one of the most important sites of the Toltec world, a Tollan or site where the power of the great lords and warriors region was legitimized. It is possible that through these rituals it maintained the Toltec cosmogony.

During that period, it went from being a local ceremonial center to a regional shrine. Ceramic pieces found (vases, figurines and malacates) provide evidence of trade networks with remote regions, as far as Tajumulco in Guatemala, the Huasteca Mexico and Los Altos de Jalisco to the north.

Around 1,200 CE, the Toltec groups left the Valley with the consequential decline of ceremonial center functions. During the late postclassical various ethnic groups continued to live in the Valley, and used partially site for their ceremonies, essentially the pyramid. El Cerrito would not regain the splendor reached with the Toltec, but its recognition as a sacred space open to prehispanic deities continued well into the 17TH century.

According to Franciscan records (1632), Chichimeca, Otomi and Purépecha natives continued to make offerings at the altar. The religious order, placed an image of Mary at the site, to transform the prehispanic cult held onsite for over 1000 years.

Some main walls of the pyramid are discovered. Archaeologist Carlos Margain. (1941)
A map is prepared, some sampling, athe nd exploration wells, determining the extent of the archaeological site. Archaeologist Ana Ma. Crespo (1984)
Land recuperation and some excavations at the ceremonial center. (1995)
The site El Cerrito is declared archaeological monument. (November 9, 2000)

El Cerrito archaeological site, also known as “El Pueblito pyramid”, is a magnificent example of the influence that the Toltec culture reached in the area.

Per recent excavations, the pyramid has three different constructive stages:

Used stone plates for construction, with decoration engravings in walls, altars and sidewalks. The motifs include representations of historical and mythical characters, war markers, calendar glyphs, symbols, and numerous attributes terrestrial, aquatic and astral of the Quetzalcoatl deity. The material used includes bas-relief engraved slabs, for finishing they were painted with mineral pigments of colors blue, red, yellow, white and black.

It is a large elongated platform, partially destroyed and cut in the middle by the access road. As part of the main structure, Chac Mool sculptures, atlantes or columns walls were found. The Platform is 130 meters long, 30 meters wide, the height is not known, from its deterioration.

Was built on a leveled platform 118 m per side. On this platform the pyramid was built, it is 30 meters high. It consists of thirteen small bodies slope-staggered, for construction basalt stone and red sandstone were used, the structure was stuccoed and painted in red and ochre colors. Each of its facades had large stairways delimited by “alfardas” (intermediate side walls).

Between the Sculpture Plaza and La Danza, as the palace was built, where small altars were found, with abundant offerings associated; clay braziers almost a meter in height. This Palace, in addition to dividing the site, provided privacy in the squares, necessary for ritual functions. The façade towards each of the squares was formed by a portico, this is a roofed area supported by wooden columns decorated with stone and stucco painted in red and blue crowning.

It is enclosed by a stone wall that reaches up to six meters in height, the South side is 290 meters long and the west side is 225 meters long.

Located northeast of the platform is built by a system of stone boxes, the west facade of the square is sloped and is covered with stuccoed basalt stones and red paint.

It is of the sunken patio type. Is located at the southeast corner of the pyramid basement, the best preserved, it is 72 meters long by 60 wide, altars were built at the ends eastern and western ends, with a sloped wall. At this place two offerings were found, consisting of skulls and smokers, it is referred to as the skulls altar or Tzompantli.

All El Cerrito and ceremonial center structures, contained sculptures fragments, indicating their importance and of the sculpted architectural elements, part of the construction and decoration of the site.

The sculptures have traces of having been painted in colors red, yellow and blue, sometimes covered with stucco.

The facades and cornices of the building and the walls of the structures were decorated.

Battlements have been found in the form of snails and crossed arrows with floral motifs and chalchihuites drums, all forming friezes and frames.

Ceramic found include shapes and decoration of pots, boxes and jugs. Most articles are for ceremonial rituals, as smokers, braziers, ollas, Tlaloc, pipes vases, Mazapa figurines and clay malacates.

The archaeological zone of El Cerrito is located 7 kilometers southwest of the historic center of the city of Querétaro, accessed by the constituent Boulevard (before the free road to Celaya), turning right at the Tejeda bridge, continuing along the street Hidalgo turning right is the front door.

To visit the area you need light clothes preferably shirt or long-sleeved shirt, hat or cap and tennis or soft shoes, the weather is mild.

The services that this area has are: 2 guides that give the visit, there are interpretive trails, internal signage, containers, parking for 20 vehicles, rest area, interpretation room and sanitary service.