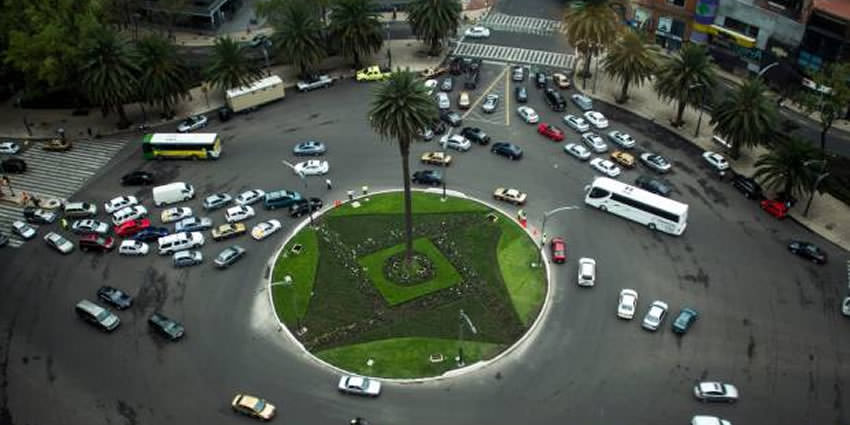 Glorieta de la Palma (“Palm Roundabout”) is a roundabout in Mexico City that connects Paseo de la Reforma with Río Rhin and Calle de Niza. This natural monument that has been embellishing is one of the most representative avenues in the city for years.

Glorieta de la Palma has got its name from the tall palm that stands in the middle. It is the only roundabout along Reforma that has never had a monument.

The original outline of the Paseo de la Reforma ran from the entrance of the Chapultepec forest to Bucareli. It was built by the order of Maximiliano in the mid-19th century. It served as a direct path to the Imperial Palace (now National Palace) from Chapultepec Castle (home of the emperors).

The avenue was baptized as “Paseo de la Emperatriz,” in honor of his wife, Carlota.

At the same time, beautiful ridges and European-style gardens were built to adorn the road.

Sometime later, between 1872 and 1876, with the government of Sebastián Lerdo de Tejada, four roundabouts with endemic flowers were added.

Then, at the time of Porfiriato, when authorities & many of its inhabitants wanted to have very European-style places in the city, trees were planted along the avenue. Also, the sidewalks and ridges were embellished, lighting was placed and built several roundabouts in which there would be different monuments.

So first, the roundabout was built in which they placed the statue of the former king of Spain, Carlos IV, and that people began to know better as “El Caballito,” just in what is now the intersection of Avenida Juárez, Bucareli, and Reform. At present, there is no longer a roundabout, and “El Caballito” is located on the esplanade of the National Museum of Art.

But a few meters later, in what is now the intersection of Reforma and Nisa, another roundabout was built. According to some versions, it would be dedicated to a monument in honor of Miguel Hidalgo, together with the Independence Monument – the “Angel” – would commemorate the first anniversary of Independence in 1910.

But when everything was ready, they planted a palm tree there so that the roundabout didn’t look so alone.

Other versions say that from the beginning, it was thought only to put a palm tree there. But in reality, that would have seemed like a “waste” for the line that was to be made of such an avenue.

And the palm stayed.

With the Revolution, all plans changed, the city began to overgrow, especially in the mid-20th century, and the Paseo de la Reforma had several changes, such as its expansion. And, in the late 1970s, eliminated the roundabout that was about the entrance of the Chapultepec forest, in which years before they had placed the Diana Huntress, to change it to a place where no one saw it, so, a decade later, they returned it to the roundabout where it is currently.

But the palm never moved. It seems that for over 100 years, no one remembered that “the palm gazebo” was a place reserved for a monument so that large trees became part of the landscape and today receives the maintenance that any other point interest of the city.

This natural monument is almost 100 years old, since the first photo where it appears dates from 1920. In it, the plant seems very small, which has made some researchers deduce that it was planted at the end of the 19th century when they date the projects that sought to beautify the Paseo de la Reforma.

Nowadays, millions of passersby who pass through that place every day do not even notice the presence of this palm. When the construction of a monument for the bicentennial of Independence was raised, nobody thought about locating it there.

Although the palm of Reforma is already part of Mexico City, throughout history, it has had its detractors, such as those who criticize that this is not a native tree and that, instead, a prickly pear cactus should be planted there. Or Some voices that say it should not be in that place so polluted, so they have proposed to transplant it in other parts of the capital, such as University City.

But to tell the truth, the palm is already part of the city, and it is the mystery that it makes it more special. Day by day, cars witness how this plant has survived decades, earthquakes, and pollution.
It is unknown how many years will remain there, witnessing the city hustle and bustle that characterizes this avenue and functioning as a meeting point for those who say “see you at the Glorieta de la Palma”.