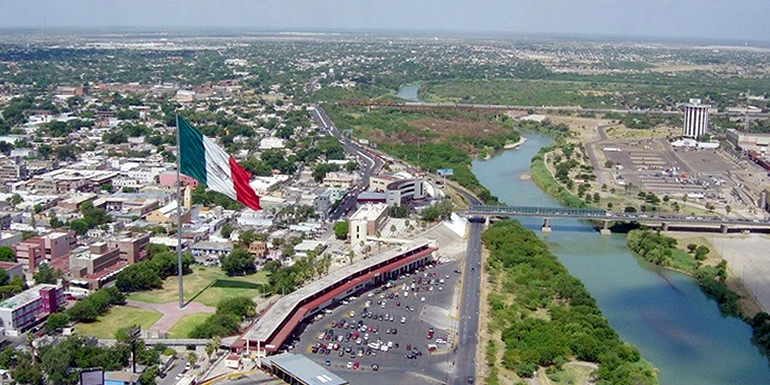 Nuevo Laredo is a border town that lies on the banks of the Rio Grande, across from the U.S. city of Laredo.

Nuevo Laredo is the largest inland port in Mexico, just as its counterpart across the border is the busiest inland port (bridge crossing) in the United States.

Nuevo Laredo is connected to U.S. city of Laredo by 3 international bridges and a rail bridge.

Rio Grande is the only source that supplies its citizens with water.
El Coyote Creek supplies Nuevo Laredo’s only natural lake El Laguito (“The Small Lake”).

The area consists of a few hills and flat land covered with grass, oak, and mesquite.

Nuevo Laredo features a semi-arid climate. Nuevo Laredo’s weather is influenced by its proximity to the Chihuahuan Desert to the west, by the Sierra Madre Oriental mountains to the south and west, and by the Gulf of Mexico to the east.

Its geographic location causes Nuevo Laredo’s weather to range from long periods of heat to sudden violent storms in a short period of time.

Nuevo Laredo is cold for Tamaulipas standards during winter, the average daytime highs are around 19° C (66° F) and overnight lows around 6° C (43° F).

Rain season is from Abril to October.
There are usually 35-40 rainy days per year in Nuevo Laredo.

Nuevo Laredo was part of the territory of the original settlement of Laredo (now in Texas). The settlement was founded in 1755 by Don Tomás Sánchez and was named Villa de San Agustin de Laredo after Laredo in Spain and in honor of Saint Augustine of Hippo.

The origin of name of the original spanish town of Laredo is unclear.
Some scholars say the name stems from Glaretum which means “sandy, rocky place”.
Others state Laredo stems from a Basque word meaning “beautiful pastures”.
Laredo might also stem from the Latin Larida which means gull.

Nuevo Laredo (“New Laredo”) was founded in 1848, by Laredo families who wished to remain Mexican and moved to the Mexican side of the Rio Grande.

Nicknames of Nuevo Laredo: Chuparrosa (“Hummingbird”) and Puerta a México (“Door to Mexico”)

The colonial settlement of Villa de San Agustin de Laredo was founded in 1755 by Don Tomás Sánchez while the area was part of the Nuevo Santander region in the Spanish colony of New Spain.

In 1846 during the Mexican–American War, the town was occupied. After the war, the Treaty of Guadalupe-Hidalgo ceded the land to the United States. A referendum was taken in the town, which voted to petition the American military government in charge of the area to return the town to Mexico. When this petition was rejected, most of the population, who were Tejano and had been in the area for generations, moved across the river into Mexican territory, where they founded Nuevo Laredo.

Nuevo Laredo was founded on May 15, 1848, by seventeen Laredo families who wished to remain Mexican and moved to the Mexican side of the Rio Grande.

They identified with Mexico, its history, and its cultural customs, and decided to keep their Mexican citizenship. The founders of Nuevo Laredo even took with them the bones of their ancestors so they would continue to rest in Mexican ground.

As an indication of its economic importance, one of Mexico’s banderas monumentales is located in the city. These flags have been established in state capitals and cities of significance.

It is located in the historic city center, here you can find many kinds of mexican crafts from all the country, e.g. costumes, jewelry, traditional mexican candies and piñatas.

There are three bridges in the Nuevo Laredo area:

Also the Colombia-Solidarity Bridge, located about 32 km (20 miles) NW of the city in Colombia, Nuevo León. There are no urban areas on either side of this bridge.

The Centro Cultural (“Cultural Center”), is Nuevo Laredo’s main theater with a sitting capacity of 1200 guests. The theater has presented high level shows high level, plays, concerts and dance recitals. The theater has a museum, library, and a cafeteria.

Natural history museum was opened in 2007, in its permanent museum exposes human skeletons, dinosaur bones and fossils in general that allows to make a chronological history travel of the region, fauna, flora and geography, from the jurassic to our era.

Jose Reyes Meza Museum was opened in June 2008 It has the name of a remarkable painter, designer and muralist from Tamaulipas, the museum exposes various plastic works.

Old Customs Building was restored and adapted to serve as a cultural space, with the concert hall “Sergio Pena”, the great forum and an exhibitions gallery.

Longoria bank museum was built in 1929 by Don Octavio Longoria, currently its lobby is used to exhibit plastic arts and photography.

Historical Archive lies the documentary and graphic memory of the city, also has temporary exhibitions, consultation area, audiovisual area and the site museum which displays railroad artifacts, photographs and documents of time alluding to the history of the Railroad in Nuevo Laredo.

Polyforum Dr. Rodolfo Torre Cantu. Place to hold events and mass entertainment, was opened on September 4, 2013. It has the capacity to hold over 5000 people and parking for over 1000 vehicles. The project is still under construction and includes a civic center, stage performances, cultural walk, aquarium, soccer fields and basketball courts and more.

The city has some malls like Paseo Reforma, it was opened in May 2008, this mall has many commercial establishment, like Wal-Mart Super Center, The Home Depot, and Cinépolis.
Other shopping centers are, Plaza Real, Plaza 2 Laredos, Plaza commercial La fe.

There is a fairly large array of night-time entertainment venues.

Most establishments (clubs, bars, and restaurants) are located in the historical district. Other restaurants (including chains such as Carl’s Jr., Burger King, Kentucky Fried Chicken, and McDonald’s) are located along Avenida Vicente Guerrero and Avenida Reforma.

There are 3 bridge crossings, but 1 of them is commercial only (24 hours opened).
Both regular traffic city crossings are difficult for RV’s and large vehicles. So if you have a large vehicle or are intimidated by traffic and little parking, the Colombia crossing about 32 km (20 miles) to the North is for you.

Nuevo Laredo is served by the Quetzalcóatl International Airport with daily flights to Mexico City.