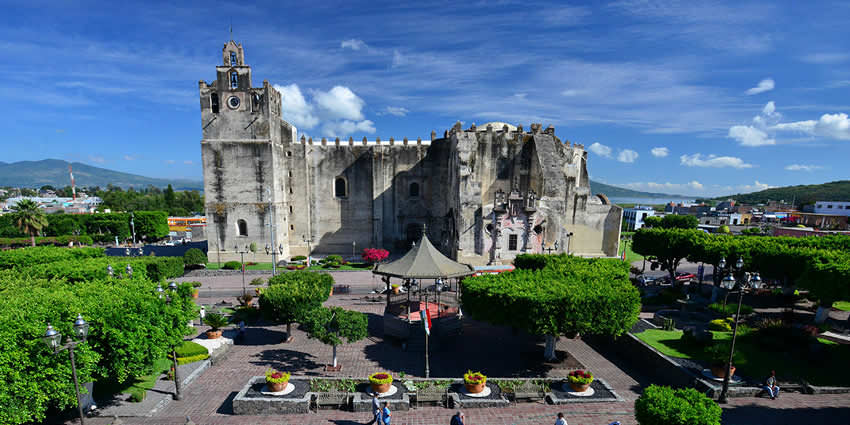 Yuririhapundaro (also known as Yuriria) is the municipal seat of Yuriria municipality, one of 46 municipalities in the Mexican state of Guanajuato

Yuriria stands out for its location and its historical importance. Formerly it was known as San Pablo Yuririhapúndaro.
There is also an artificial lake that is called “Yuriria Lagoon”.

Yuriria is linked to the cities of Moroleón and Uriangato, all these three cities together form the same metropolitan area since October 2010, the Moroleón-Uriangato-Yuriria Metropolitan Area.

The name Yuririhapundaro comes from the Purepecha language and means “Place of the Bloody Lake”.

Yuriria is located in the “Bajío”, or lowlands, of Guanajuato. It is bordered to the east by Salvatierra and Santiago Maravatío, to the north by Jaral del Progreso and Valle de Santiago, to the south by Uriangato and Moroleón, and to the west by the state of Michoacán.

Its total area is 656 kilometres².

The population of Yuriria and its surrounding areas totals 89,126 people. Of these, only 26,337 live in urban Yuriria, while 62,789 live in the rural areas surrounding the main town.

Santa Monica Ozumbilla is one of the oldest communities in Yuriria dating as far back as the early 16th century.

The first indigenous population of Yuririhapúndaro was located on the slopes of the hills that surround the city and extended without any symmetry to the surroundings of the crater lake.

Some vestiges of archaeological ruins of a pyramid and indigenous rooms were found in these places, where pieces of ceramics, necklaces, and carved stones have been found.

In 1540, on February 12, the Augustinian missionary Fray Diego de Chávez founded and blessed the town of Yuririhapundaro.

The official date for the Spanish foundation of Yuririhapundaro is February 12, 1540. By a royal decree issued in the year 1560 on February 19, it is given the legal name of San Pablo Yuririhapundaro.

Yuriria, is one of the oldest municipalities of the State of Guanajuato, in this place the first mine of the State with the name of San Bernabé was registered because here it was the closest place to 20 leagues around, where there were public offices and registry of mines and mortgages.

Said registry of the mine was made on July 11, 1548, before the mayor of justice Don Pio González y Gómez, the old building where the correctional facility was located in the current Portal “Corregidora”, located towards the west side of the market.

September 16, 1548, is the date on which the missionary “Fray Diego de Chávez y Alvarado” arrives at this place, according to data in the Parish Archives, he stayed in some Jacales de Zacate built next to the chapel of Santa María, which had been built in 1537 by Fray Alonso de Alvarado, the first conqueror of the natives in this place.

Fray Diego de Chávez, upon his arrival, took on the task of studying how to combat malaria, an endemic plague that decimated the inhabitants of Yuririhapúndaro due to the existence of large swamps that were found to the north of the town, being breeding grounds for the mosquito that transmits said plague.

He had great knowledge of architecture, and he began to study the topography of the place, finding that the Grande de Toluca River now called Lerma River passed not far from the place, he requested the cooperation of the inhabitants and built the Taramatacheo canal, which would lead the waters that flooded these marshy lands.

On Thursday of the corpus of 1550, the floodgates of the said channel were opened, forming what we now know as Lake Yuriria with its Islands that are: San Pedro, Peñón de Vargas, Mario, Tindaro, El Patol, Sacopúndaro, Puranque, Characo, Las Cabras, and El Fuerte.

This Lagoon is considered the first hydraulic work in Latin America.

On November 1, 1550, on the feast of all saints, R.P. Fray Alonso de la Vera y Cruz, from the Michoacán province of San Nicolás de Tolentino, solemnly blessed the first stone of the magnificent work that is the ex-convent of Yuriria, and nine years later on corpus Thursday of 1559 the missionary Fray Diego de Chávez, celebrated the first mass in his own work.

The thousand and one islands of the Yuririhapúndaro Lagoon are also part of the history of this town, for example on the island of San Pedro, the R.P. Fray Elías de Socorro Nieves on September 21, 1882, died a victim of the Cristero War on March 10, 1928, and because of his sanctity, he is considered the pride of the people of Yuri.

People gather in that place to drink and socialize, it is also known as the city’s Arrumaco Reef.

El Fuerte and Las Cabras are two islands, which together form the Fuerte Liceaga archipelago, which was used by General Liceaga to confront Don Agustín de Iturbide during the 400 days of resistance in the struggle for the independence of the country that took place in this place from September 9, 1812.

On August 30, 1913, at 5 in the morning, on a Saturday, this city suffered an attack by the revolutionary forces of the Fusileros de Coahuila brigade, under the command of General Joaquín Amaro and subordinate generals, Alfredo Elizondo, Cecilio García and another nicknamed El Chivo, Anastasio, Abundio and Tomás García.

The Attackers managed to infiltrate many of the streets of the place in the western and southern parts of the area in the early hours of this day, placed a machine gun on the roof of the Esquipulitas temple, and began a horse-race attack along Calle “De Carreras” (Today May 5th Street).

The city had no garrison, only 5 residents enrolled as defenders were above the vaults of the Convent.

Jesús Juárez, police commander, and his son Jerónimo, Don Anselmo Juárez, Albino Rodríguez and Epifanio N. “El Pifas”; On the roofs of the houses were the wealthy neighbors who had weapons, among whom Pastor Castro Tinoco stood out.

The Attack was vigorous, but they managed to repulse it, the thrust being greatest from eight to eleven o’clock; At three o’clock in the afternoon the withdrawal of the attackers began and at five o’clock everything was over.

Of the attackers, 10 corpses and 2 prisoners were collected who was shot by the triumphant neighbors.

In this action, the attackers set fire to the houses of Mr. J. Sacramento Guerrero, who was a cigar factory; of Don J. Trinidad Villagómez, the girls’ school located on Victoria Street, which is now the hospital, and the house adjoining the latter.

Most of the neighbors, on the night of this day of combat, concentrated in the Convent.

At about nine o’clock at night, doctor Francisco Orozco arrived to provide assistance, accompanied by José Ma. Galván, Enrique Lozada, Porfirio Orozco and eleven other residents of Valle de Santiago; bells tolled and guns were fired into the wind.

On December 20, 2012, Yuriria is named Magical Town by the Federal Tourism Secretariat.

The municipality of Yuriria is located in El Bajío or the southern part of Guanajuato, relatively close to the border with the state of Michoacán de Ocampo. Its total size is 656 square kilometers.

Yuriria has various places as geographical and architectural icons that have become tourist sites in the state of Guanajuato, such as its Parish and Ex-Convent, these being the best-known emblem of Yuriria.

Its construction dates back to November 1550 and its completion in 1559. There is also an artificial lagoon, known as Laguna de Yuriria, which currently receives drainage from the cities of Moroleon and Uriangato.

Another of the main attractions is the Crater-Lake known as “La Joya” it is an Extinct Volcano, within it the Virgin of Guadalupe is venerated in an image that appeared on one of its rocks, it is advisable to go accompanied since the level of crime is severely high.

Also, you can visit the boardwalk, where people meet to hang out, its Old Chapels and Churches dating from 1538, such as the Chapel of Our Lady of Perpetual Help for the Poor or better known as Santa María, which is It is located a few meters from the Lagoon, located within the so-called Santa María neighborhood where the upper social classes of the municipality of Yuriria reside.

In Yuriria there are churches of great importance, such as the temple of Santa Marìa, which was built in 1537.

The temple of the Lord of Health, in which the holy Lord of Health is venerated, which was given to the indigenous people of Yuriria in 1639.

The Esquipulitas chapel, built in 1867 by Fray Tomás de Villanueva.

The precious blood of Christ is one of the most important, it begins to be built on December 14, 1884.

The sculpture of the Divine crucified that is venerated there, coming from Spain, is the feast of San José on March 19 in San Jose Otonguitiro.

The Parroquia of Yuriria, an important cultural icon of the state

The ex-Convento or cathedral is probably the most important architectural structure in Yuriria, as well as an important icon in the state in general.

Since its construction in November 1550, and its culmination in 1559, its massive size and dazzling structure captured the attention of generations and ultimately put Yuriria on the map.

Its construction was started by Fray Diego de Chavez, nephew of the conquistador Don Pedro Alvarado and was designed by the famous architect Pedro del Toro.

Among the Main Traditions of this place is the party in honor of the “Lord of the Precious Blood of Christ” on January 4, there is a night parade of Allegorical Cars with religious passages accompanied by Wind Bands, Local Dances and from other regions of the state.

Another of its main festivities is on August 28, when “San Agustín” is celebrated, its patron saint as they are completely evangelized by Augustinians.

Also, every August 31, the Lord of the Precious Blood is taken from his temple and a tour of the city is made accompanying the image until reaching the city’s Parish, where it lasts until September 30, the day on which He returns to his temple.

Among them is also the day of the dead in which deceased relatives are worshiped and mats are placed in the main garden.

In the municipality the traditional carnival parade is carried out in which rhythmic tables, stilt walkers and robotic figures, the queen and her princesses and the “Garatuzos” also participate, with their characteristic black clothing, who at the end of the tour carries out the traditional burning of bad humor in front of the convent of San Agustín and some young people break shells full of confetti, putting an end to the bad mood placed in a mortuary box, while they set it on fire and celebrate in the midst of the people.