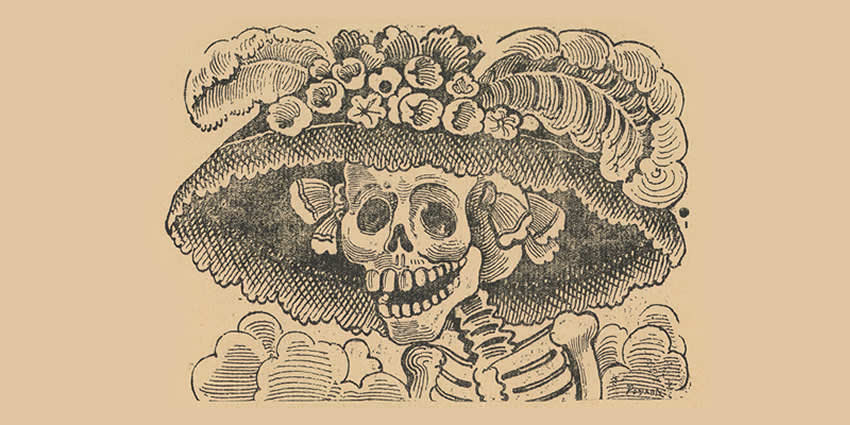 The image depicts a female skeleton dressed only in a hat befitting the upper-class outfit of a European of her time. She is offered as a satirical portrait of those Mexican natives who were aspiring to adopt European aristocratic traditions in the pre-revolution era.

La Calavera Catrina, in particular, has become an icon of the Mexican Día de Los Muertos (“The Day of the Dead”).

José Guadalupe Posada Aguilar’s work has influenced numerous Latin American artists and cartoonists because of its satirical acuteness and social engagement. He used skulls (“calaveras”), and bones to convey political and cultural critiques.

La Calavera Catrina is among his most enduring works. This image made from zinc etching captures the famous “calavera” (“skull”) skeleton image that had become popular at the turn of the 20th century.

The original leaflet describes a person who was ashamed of his/her indigenous origins and dressed imitating the French style while wearing lots of makeup to make his/her skin look whiter.

This description also ties to the original name Garbancera, which became a nickname given to people of indigenous ancestry who imitated European style and denied their own cultural heritage.

La Catrina has become the referential image of Death in Mexico, it is common to see her embodied as part of the celebrations of the Day of the Dead throughout the country. She has become a motive for the creation of handicrafts made from clay or other materials, her representations may vary, as well as the hat.

While the original work by Posada introduced the character, the popularity of La Calavera Catrina, as well as her name, is derived from a work by artist Diego Rivera in his 1947 completed mural “Sueño de Una Tarde Dominical en la Alameda Central” (“Dream of a Sunday afternoon along Central Alameda”).

Rivera’s mural was painted between the years 1946 and 1947 and is the principal work of the “Museo Mural Diego Rivera” adjacent to the Alameda in the historic center of Mexico City. It measures 15 meters long and it stood at the end of Alameda Park.

The mural survived the 1985 earthquake, which destroyed the hotel, and was later moved across the street to the Museo Mural Diego Rivera, built after the earthquake for the purpose of housing and displaying Rivera’s restored mural.

Rivera’s mural depicts a culmination of 400 years of Mexico’s major figures, which include himself, Posada, and his wife Frida Kahlo.

Rivera took inspiration from the original etching and gave Calavera a body as well as more of an identity in her elegant outfit as she is poised between himself and Posada.

The intent seemed to be to show the tradition of welcoming and comfort the Mexicans have with death and especially the identity of a Lady of the Dead, harking back to the heritage of the Aztec goddess Mictecacihuatl.

Catrina has come to symbolize not only El Día de Los Muertos and the Mexican willingness to laugh at death itself, but originally Catrina was an elegant or well-dressed woman, so it refers to rich people.

Death brings this neutralizing force; everyone is equal in the end. Sometimes people have to be reminded of that.

The culture of La Calavera Catrina has ties to political satire and is also a well-kept tradition as the original was inspired by the polarizing reign of dictator Porfirio Díaz, whose accomplishments in modernizing and bringing financial stability to Mexico pale against his government’s repression, corruption, extravagance, and obsession with all things European.

The concentration of fantastic wealth in the hands of the privileged few brewed discontent in the hearts of the suffering many, leading to the 1910 rebellion that toppled Diaz 1911 and became the Mexican Revolution.

She also symbolizes the contrasts between the upper and lower classes, for times were cruel. The social classes were extremely segmented and the highest class was the most fortunate, enjoying many privileges; in contrast, the lower classes were nearly invisible.

To explain and rescue the folklore of worshiping the dead, while showing this off to high society, José Guadalupe Posada made caricatures of Death, one of these drawings being the famous “calavera” with an elegant hat, though only representing the head and bust with a sophisticated and skeletal essence.

The calavera’s ties to the past heritage of the Aztecs can be seen in various ways. The indigenous culture of skulls and the death-goddess Mictecacihuatl is common in pre-Columbian art.

Lady of the Dead, Mictecacihuatl, was the keeper of the bones in the underworld, and she presided over the ancient month-long Aztec festivals honoring the dead.

Since the pre-Columbian era, Mexican culture has maintained a certain reverence toward death, which can be seen in the widespread commemoration of the Day of the Dead.

With Christian beliefs superimposed on the ancient rituals, those celebrations have evolved into today’s Day of the Dead.

As for the Spanish heritage (the death-orientation of the monastic orders, Dance of Death, and memento mori traditions), it blended with the average Mexican’s stoic, but far from humorless, view of death.

It should be noted that some find La Catrina to have closer ties to the Dance of Death than to the possible origins of the calavera in the art of ancient Mesoamerica.

La Catrina differs markedly from the rigid sobriety of skulls carved by the Aztecs or images of decomposing corpses depicted by the ancient Maya.

In prints and various other art forms associated with the Day of the Dead – everything from paper-mâché to “papel picado” (“perforated paper”) to sugar and chocolate—images of the calavera are unmistakably humorous.

The skeletons, often dressed in finery, move playfully and smile widely. In some ways, these animated figures are much closer visually to the European Dance of Death motif in which limber skeletons lead, lure, or drag unwitting mortals to their ends.

Though these interpretations seem to ignore the full relationship that the Mexicans have with death, as well as the macabre humor that ties to the cycle of life, death, and ceremony that the Aztecs had, it should be understood that few countries pay homage to death the way Mexico does; offerings, songs, respect, and humor are all common Mexican expressions towards death.

The European ties are there both for comic effect as well as to depict the symbolic shell that Europe cloaked Mesoamerica in, but the native bones still lie within.

La Calavera Catrina today can be found in her more traditional form both in drawn works as well as sculptures made out of Oaxacan wood carvings, paper-mâché sculptures, majolica pottery, and Barro negro black clay pottery. She is also coupled with male skeletons.

Works such as the screen print Sun Mad (Raisins) by Ester Hernández in the Smithsonian American Art Museum shows the influence of Posada’s earlier vision. The same might be said of the cover for Los Lobos’ album La Pistola y el corazón, which depicts a pistol toting Catrina in a couple’s embrace.

A character based on La Catrina appears as a protagonist in the animated 2014 movie The Book of Life, where she is named “La Muerte” and is the queen of the deceased who is remembered by the living. She is referred to in the Latin American Spanish dub as “La Catrina”.

Two educational video series, La Catrina and La Catrina: El Úlitmo Secreto, were filmed in Mexico by Pearson Education, and include various program components. Both videos integrate language proficiency with culture and follow the journey of Jamie González as she searches for the secrets of her mysterious great-grandmother.

In the MMORPG World of Warcraft, during the first and second days of November, a Day of the Dead Celebration is held among the largest Capital Cities of the game.

Each city has a Catrina, represented as a dancing female undead NPC dressed in a mariachi outfit. If the player dances with her, his or her player character will also take the appearance of an undead character with a similar outfit.

In the Pathfinder Roleplaying Game, creatures called Catrinas painlessly welcome into the afterlife those who cannot accept death. They are similar in appearance to La Catrina, wearing a festive dress and carrying a bouquet of flowers.

The upcoming Video Game Need for Speed: Payback Features a crew leader by the name of “La Catrina” as the leader of her crew “Graveyard shift”. Her motto says “When you ride a Hundred Miles an hour, Every decision is Life and Death”.