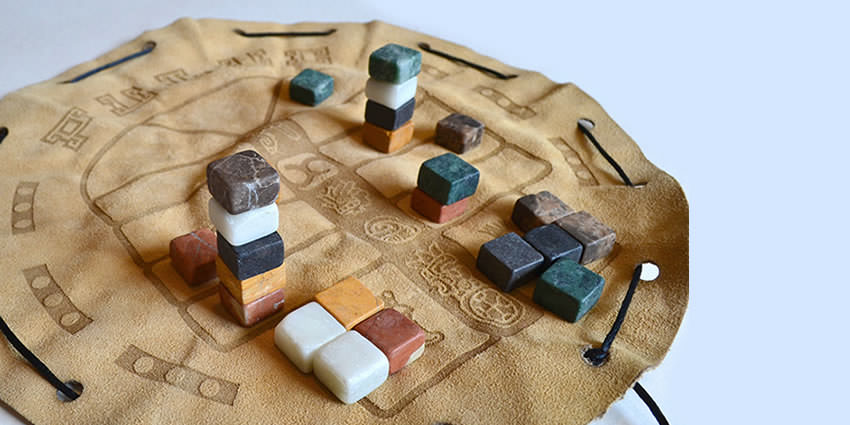 Bul, also called Buul, Boolik or Puluc, is a running-fight board game originating in Mesoamerica and is known particularly among several of the Maya peoples of Belize and the Guatemalan highlands. It is uncertain whether this game dates back to the pre-Columbian Maya civilization, or whether it developed in the post-colonial era after the arrival of the Spanish conquistadores.

There is linguistic evidence that the ancient Mayans used to play games of chance. The name of BUL occurs in several Mayan languages and always means to play with dice. Sometimes, by extension, it means “to lose with gambling”.

There is archaeological evidence that the Mayans knew the square- and oval-shaped patolli boards. There are many sites throughout the Maya area where archaeologists found patterns of patolli boards carved in floors or benches. Unfortunately, there are no BUL boards found. Up till now no reference to Maya board games was found. Of course, there are a few pictures displaying priests throwing corn or seeds for divination.

It is not known exactly when the game was developed or what the original rules were as very few records survived the invasion by the conquistadors between the 15th and 17th centuries.

How to play Bul?

There are a variety of ways to play the game. The game could be played by two people, or by two equal-sized teams. The overall objective is to capture and subsequently kill the playing pieces of the opposition, so the game is, in essence, a war game.

The playing area is divided into equal spaces using rods placed parallel to each other. The two players have control of a base at either end of the play area. The players take an even number of stones or figurines (or any suitable playing piece) and place them in their respective bases.

The movement of the stones is determined by the roll of four dice or bul (corn kernels). These are marked black on one side (typically with charcoal) so that they land showing either a yellow or black face. The number of marked faces showing determines how many spaces a stone can move.

Alternating turns, players roll the bul and move any of their stones the corresponding number of spaces toward the enemy base. A stone cannot move to space already occupied by a friendly stone. If there is no other option but to do this, a player must pass.

Every time the capturing stone moves, its prisoners are moved with it. If a stone lands on an enemy stone that already has prisoners, it captures that stone and its prisoners, and these are placed beneath it.

When a stone captures an enemy stone, it immediately reverses direction and begins heading back to the home base. Once a stone and its prisoners reach home, any enemy stones are removed from the game, or killed.

Friendly stones are liberated or returned to the set of stones that can be played.

A player wins once they kill every enemy stone.

The game is played with one stone for each team member. Players on a team rotate who rolls the bul and moves a stone.

The number of stones used by each player can be changed for a shorter or longer game as necessary. Players can also agree before the game that only a certain number of stones can leave the base and be in play at any one time (an example being that players can only have two stones in play outside of the base).

The game length can be changed by having fewer spaces between the two bases. It was mentioned twenty-five dividing rods being used, but a much shorter game would be played using only nine or ten rods.