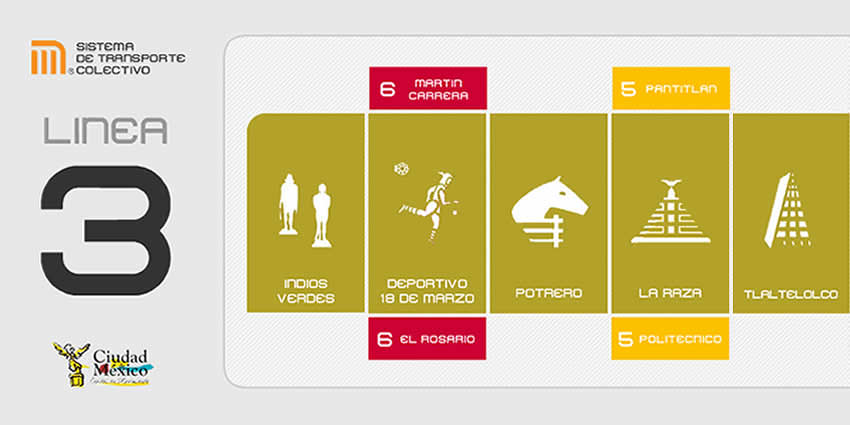 Each metro station in Mexico City is identified by a single icon. Created at a time when the country’s literacy rate was low and the capital city’s metro system was small, the design concept was intuitive and easy to execute.

Since one-third of the Mexican population could not read or write and most of the rest had not completed high school, it was thought that patrons would find it easier to guide themselves with a system based on colors and visual signs.

Nearly 50 years later, adult literacy rates in Mexico have risen to just under 95 percent while Mexico City’s metro system has grown to 12 lines and 195 stations. Yet the icon system – drawing from current and ancient associations with the built environment – endures.

The metro’s icons were proposed by the graphic designer Lance Wyman when the transit network was being developed. His team created the images for the first three lines.

Logos are generally related to the name of the station or the area around it.

As the network expanded, additional icons aren’t always so clear.

What’s happened now is that some of the icons of the station depend more on depicting things that come out of Aztec cultures, things that even the Mexican population would have a hard time describing as far as what they are, so there’s a weak area. But it still works.

As a helpful gesture, the city’s transit authority, Sistema de Transporte Colectivo (STC), tweets out nearly one icon a day with an explanation of each (in Spanish, of course).

Why is Talismán station represented by a mammoth? Because workers discovered the remains of one while excavating the site.

The logos are not assigned at random; rather, they are designated by considering the surrounding areas, such as:

The logos’ background colors reflect those of the line the station serves. Stations serving two or more lines show the respective colors of each line in diagonal stripes, as in Salto del Agua.

If you’re in a rush to learn them all, there’s an interactive map on the Metro’s website that pulls up any station’s information in one click, starting with a summary of the station icon.

The tool actually fits right in with Wyman’s belief in the icon system as a 21st-century transit language.

With the technology we have, it really does make sense to hang on to the idea of using icons. You can give context and then you can go to the icon, get to the station, and go to Google Maps if you want to see what’s happening at that station area.

We navigate our lives now with icons, illiterate or not. Now it’s a matter of designing the systems and designing better icons and better systems of using them, and that’s just a lot of fun for me because I was in it from the very beginning. When it works, it’s like writing poetry. You capture the essence of something that’s important, and it’s nice because there’s immediate feedback.

The logo system was adopted for the Guadalajara and Monterrey metros, and recently for 2005, 2009, and 2011 Mexico City Metrobús.

Although logos are no longer necessary due to literacy being now widespread, their usage remained.