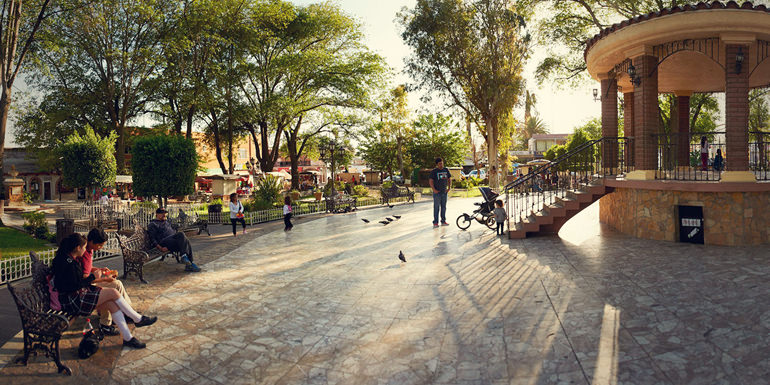 Tecate is a small city in Baja California, Mexico, and the municipal seat of Tecate Municipality.

It is on the border with Tecate, California, United States. There is a small port of entry between the sister cities that serves as a calmer alternative to the bustling port of Tijuana. Although the city is only 64 kilometres (40 mi) from San Diego, the road to the border crossing traverses mountainous terrain, reducing the viability of Tecate as an alternative to the San Ysidro Port of Entry. As of 2010, the city of Tecate had a population of 64,764.

Tecate is best known outside of metropolitan San Diego–Tijuana for Tecate beer and being the home of author Daniel Reveles. Tecate beer is one of the most popular beers in Mexico.

Tecate was founded on October 12, 1892. It is in a valley and is surrounded by several hills and mountains, the most prominent and famous of them being Kuuchamaa (also spelled Kuchamaa and Cuchama) Mountain. Kuuchamaa Mountain, also known as Tecate Peak in the United States, is a sacred mountain for the Kumeyaay people (known in Mexico as Kumiai) people, and the Kumeyaay language is still spoken in the mountains near Tecate at Juntas de Nejí. Kuuchamaa is rich in greenery, wildflowers and birds. Tecatenses as well as tourists are often seen enjoying hikes and bike rides along its many trails. Tecate is hot and dry during the summer and cold and windy during the winter.

In 1829, the Mexican governor of Alta California José María de Echeandía granted the valley of Tecate as the 4,439 acres (1,796 ha) Rancho Tecate to Juan Bandini. In 1836 the mountain dwelling Kumeyaay with some aid from some former mission neophytes, raided and plundered the rancho. They besieged the ranch house but the men within managed to hold out until it was relieved by a force from San Diego. With his stock and horses stolen and the house burned, Bandini–like owners of other ranchos near San Diego–had to abandon the isolated rancho. Due to the continuing hostilites with the Kumeyaay, Bandini never returned, being compensated with Rancho Jurupa, in 1838.

In the late 19th century farmers and ranchers arrived in Tecate for the first time since Bandini’s failed attempt to settle there. Soon after, they discovered its plentiful natural resources and decided to settle. Its abundant water and fertile soil made Tecate the perfect site for a productive farm market. Olives, grapes and grain became Tecate’s staple crops. The industrial sector was developed simultaneously with the creation of coffee processing plants and breweries.

Well known for its traditional infrastructure and looks, Tecate remains true to its origins with its main plaza in the center of the city and its city hall and historic church within walking distance.

Tecate’s altitude of approximately 1,775 feet (541 m) above sea level and its proximity to the ocean contribute to the temperate climate. It rains enough in the area for a thick ground cover of shrubs to grow; the change from maritime to desert climates is at a higher altitude a couple hours’ drive further east. Although often boulder-strewn, much of the land to the east of the city is taken up with ejidos, or cooperative farms.

Tecate is also the name of a small river that courses through the city, and of a hamlet on the Alta California (US side) of the border, affectionately known as “Tecatito” (population around 100; ZIP code 91980).

Tecate is on a spur of Mexican Federal Highway 2 that connects Tijuana with Mexicali via the central Sierra mountains. It is on the older, two-lane, east-west road which is toll-free.

A train from Campo, California, called the Tecate Ticket, travels to Tecate on a monthly basis (currently suspended due to a tunnel fire along the route). The train is run by the Pacific Southwest Railway Museum.

In May, the annual Tecate-to-Ensenada bicycle race takes place, with thousands of cyclists from both sides of the border participating. July is the time for a two-week celebration in Los Encinos Park, featuring dance groups, crafts, food concessions, and exhibits.

The pamplonada, or running of the bulls, was ordinarily held in August in the 1980s and early 1990s along one of the main streets, but it was canceled because of a series of accidents and violence.

Tecate has a stadium, Manuel Ceceña, which is home to the local baseball team, the Cerveceros (“Brewers”).