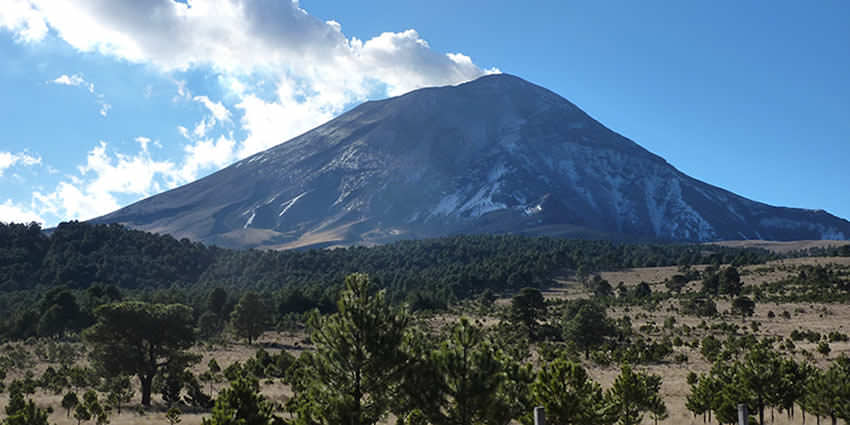 Popocatépetl (Popōcatepētl in nahuatl) is an active stratovolcano, located in the states of Puebla, Mexico, and Morelos, in Central Mexico, and lies in the eastern half of the Trans-Mexican volcanic belt.

It is linked to the Iztaccihuatl volcano to the north by the high saddle known as the Paso de Cortés.

Popocatépetl is 70 km (43 mi) southeast of Mexico City, from where it can be seen regularly, depending on atmospheric conditions.

Until recently, the volcano was one of three tall peaks in Mexico to contain glaciers, the others being Iztaccihuatl and Pico de Orizaba.
In the 1990s, the glaciers such as Glaciar Norte (North Glacier) greatly decreased in size, partly due to warmer temperatures but largely due to increased volcanic activity. By early 2001, Popocatépetl’s glaciers were gone; ice remained on the volcano, but no longer displayed the characteristic features of glaciers such as crevasses.

Lava erupting from Popocatépetl has historically been predominantly andesitic, but it has also erupted large volumes of dacite. Magma produced in the current cycle of activity tends to be a mixture of the two.

The 1966 Merrie Melodies cartoon Snow Excuse is set on Popocatepetl.

The volcano is also referred to by Mexicans as El Popo.
The alternate nickname Don Goyo comes from the mountain’s association in the lore of the region with San Gregorio (St. Gregory), “Goyo” being a nickname like short form of Gregorio.

The stratovolcano contains a steep-walled, 400 m × 600 m (1,300 ft × 2,000 ft) wide crater. The generally symmetrical volcano is modified by the sharp-peaked Ventorrillo on the NW, a remnant of an earlier volcano. At least three previous major cones were destroyed by gravitational failure during the Pleistocene, producing massive debris avalanche deposits covering broad areas south of the volcano. The modern volcano was constructed to the south of the late-Pleistocene to Holocene El Fraile cone. Three major plinian eruptions, the most recent of which took place about 800 AD, have occurred from Popocatépetl since the mid Holocene, accompanied by pyroclastic flows and voluminous lahars that swept basins below the volcano.

According to paleomagnetic studies, the volcano is about 730,000 years old. The elevation at the peak is 5,450 m (17,880 ft). The volcano is cone shaped with a diameter of 25 km (16 mi) at its base. The crater is elliptical with an orientation northeast-southwest. The walls of the crater vary from 600 to 840 m (1,970 to 2,760 ft) in height. Popocatépetl is currently active after being dormant for about half of last century. In 1991 the volcano’s activity increased and since 1993 smoke can be seen constantly emanating from the crater.

The first Spanish ascent of the volcano was made by an expedition led by Diego de Ordaz in 1519. The early-16th-century monasteries on the slopes of the mountain are a World Heritage Site.

Popocatépetl is the most active volcano in Mexico, having had more than 15 major eruptions since the arrival of the Spanish in 1519.

This volcano is monitored by the Deep Earth Carbon Degassing Project.