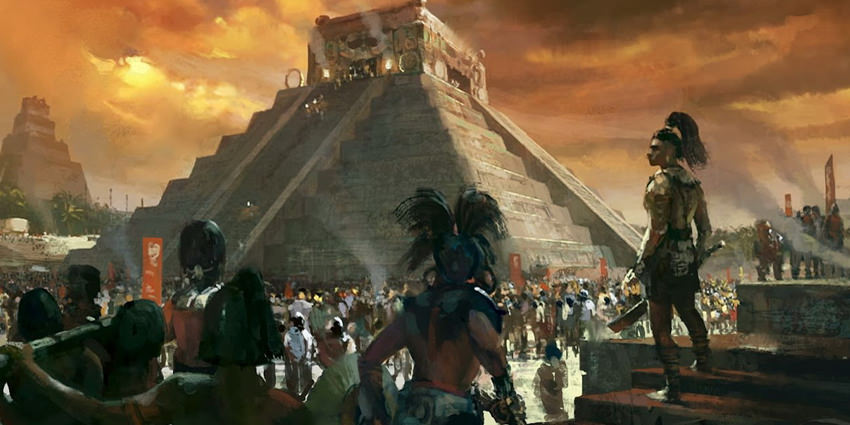 The pre-Columbian history of the territory now comprising contemporary Mexico is known through the work of archaeologists and epigraphers, and through the accounts of the conquistadors, clergymen, and indigenous chroniclers of the immediate post-conquest period. While relatively few documents (or codices) of the Mixtec and Aztec cultures of the Post-Classic period survived the Spanish conquest, more progress has been made in the area of Mayan archaeology and epigraphy.

Human presence in the Mexican region was once thought to date back 40,000 years based upon what were believed to be ancient human footprints discovered in the Valley of Mexico, but after further investigation using radioactive dating, it appears this is untrue. It is currently unclear whether 21,000-year-old campfire remains found in the Valley of Mexico are the earliest human remains in Mexico. Indigenous peoples of Mexico began to selectively breed maize plants around 8000 BC. Evidence shows a marked increase in pottery working by 2300 B.C. and the beginning of intensive corn farming between 1800 and 1500 B.C..

Between 1800 and 300 BC, complex cultures began to form. Many matured into advanced pre-Columbian Mesoamerican civilizations such as the: Olmec, Izapa, Teotihuacan, Maya, Zapotec, Mixtec, Huastec, Purépecha, Totonac, “Toltec” and Aztec, which flourished for nearly 4,000 years before the first contact with Europeans.

The Olmec were an ancient Pre-Columbian people living in the tropical lowlands of south-central Mexico, roughly in what are the modern-day states of Veracruz and Tabasco on the Isthmus of Tehuantepec. Their immediate cultural influence, however, extends far beyond this region. The Olmec flourished during the Formative (or Preclassic) period, dating from 1400 BCE to about 400 BCE, and are believed to have been the progenitor civilization of later Mesoamerican civilizations.

The decline of the Olmec resulted in a power vacuum in Mexico. Emerging from that vacuum was Teotihuacan, first settled in 300 B.C. By AD 150, it had grown to become the first true metropolis of what is now called North America. Teotihuacan established a new economic and political order never before seen in Mexico. Its influence stretched across Mexico into Central America, founding new dynasties in the Mayan cities of Tikal, Copan, and Kaminaljuyú. Teotihuacan’s influence over the Maya civilization cannot be overstated; it transformed political power, artistic depictions, and the nature of economics. Within the city of Teotihuacan was a diverse and cosmopolitan population.

Most of the regional ethnicities of Mexico were represented in the city, such as Zapotecs from the Oaxaca region. They lived in rural apartment communities where they worked their trades and contributed to the city’s economic and cultural prowess. By AD 500, Teotihuacan had become one of the largest cities in the world. Teotihuacan’s economic pull impacted areas in northern Mexico as well. It was a city whose monumental architecture reflected a new era in Mexican civilization, declining in political power about AD 650, but lasting in cultural influence for the better part of a millennium, to around AD 950.

Contemporary with Teotihuacan’s greatness was the greatness of the Mayan civilization. The period between 250 and 650 saw an intense flourishing of Maya civilized accomplishments. While the many Maya city-states never achieved political unity on the order of the central Mexican civilizations, they exerted a tremendous intellectual influence upon Mexico. The Maya built some of the most elaborate cities on the continent, and made innovations in mathematics, astronomy, and writing that became the pinnacle of Mexico’s scientific achievements.

Just as Teotihuacan had emerged from a power vacuum, so too did the Toltec civilization, which took the reins of cultural and political power in Mexico from about 700. The Toltec empire established contact as far south as Central America, and as far north as the Anasazi corn culture in the Southwestern United States. The Toltec established a prosperous turquoise trade route with the northern civilization of Pueblo Bonito, in modern-day New Mexico. Toltec traders would trade prized bird feathers with Pueblo Bonito, while circulating all the finest wares that Mexico had to offer with their divorced, immediate neighbors. The Mayan city of Chichen Itza was also in contact with the Toltec civilization were powerfully influenced by central Mexicans. The Toltec political system was so influential, that many future Mesoamerican dynasties would later claim to be of Toltec descent. In fact, it was this prized Toltec lineage that would set the stage for Mesoamerica’s last great indigenous civilization.

Latecomers to Mexico’s central plateau, the Aztecs thought of themselves as heirs to the prestigious civilizations that had preceded them, much as Charlemagne did with respect to the fallen Roman Empire. What the Aztecs lacked in political power, they made up for with ambition and military skill.

In 1428, the Aztecs led a war of liberation against their rulers from the city of Azcapotzalco, which had subjugated most of the Valley of Mexico’s peoples. The revolt was successful, and the Aztecs, through cunning political maneuvers and ferocious fighting skills, managed to pull off a true “rags-to-riches” story: they became the rulers of central Mexico as the leaders of the Triple Alliance.

This Alliance was composed of the city-states of Tenochtitlan, Texcoco, and Tlacopan. At their peak, 350,000 Aztecs presided over a wealthy tribute-empire comprising around 10 million people, almost half of Mexico’s then-estimated population of 24 million. This empire stretched from ocean to ocean, and extended into Central America. The westward expansion of the empire was stopped cold by a devastating military defeat at the hands of the Purépecha (who possessed state-of-the-art copper-metal weapons). The empire relied upon a system of taxation (of goods and services) which were collected through an elaborate bureaucracy of tax collectors, courts, civil servants, and local officials who were installed as loyalists to the Triple Alliance (led by Tenochtitlan).

The empire was primarily economic in nature, and the Triple Alliance grew very rich: libraries were built, monumental architecture was constructed, and a highly prestigious artistic and priestly class was cultivated. All of this created a “First World” aura of invincibility around the island-city of Tenochtitlan. Unlike the later Spanish, the Aztecs did not seek to “convert” or destroy the cultures they conquered. Quite the opposite: the engines of warfare and empire in Central Mexico required that all participants understand and accept common cultural “rules” in order to make the flow of imperial wealth as smooth as possible. The rules of empire in Mexico were old rules, understood by all the power players and “contenders to the throne,” as had been shown many times before (the kingdom of Tlaxcala would attempt its own power grab in 1519 by using the Spanish as mercenary-allies).

By 1519, the Aztec capital, Mexico-Tenochtitlan, was among the largest cities in the world with a population of around 350,000 (although some estimates range as high as 500,000). Beijing at the same time had a population variously estimated to be 670,000 up to one million people. By comparison, the population of London in 1519 was 80,000 people. Tenochtitlan is the site of modern-day Mexico City.

Allies of the Aztecs

In the formation of the Triple Alliance empire, the Aztecs established several ally states. Among them were Cholula (the site of an early massacre by Spaniards), Texcoco (the site of a major library, subsequently burned by the Spanish), Tlacopan, and Matatlan. Also, many of the kingdoms conquered by the Aztecs provided soldiers for further imperial campaigns such as: Culhuacan, Xochimilco, Tepeacac, Amecameca, Coaixtlahuacan, Cuetlachtlan, Ahuilizipan. The Aztec war machine would become multi-ethnic, comprising soldiers from conquered areas, led by a large core of Aztec warriors and officers. This same strategy would later be employed by the Spaniards.