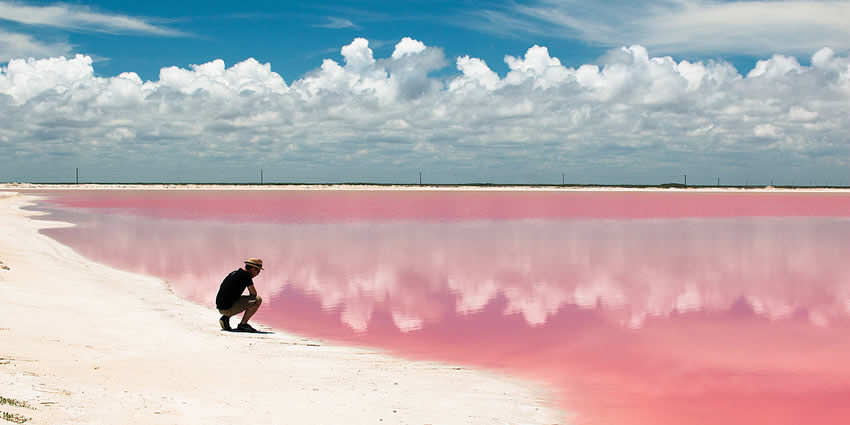 The reserve is located at the eastern end of the coastal strip of the Yucatán Peninsula, with the Gulf of Mexico at its northern limit. The area encompasses coastal areas of the Gulf of Mexico and includes important wetlands designated under the Ramsar Wetlands Convention.

Ría Lagartos extends throughout a great wetland area, which represents a good specific example of a community characteristic for this climatic zone. High biological productivity, due to conditions of marine to hyper-salinity in a karst environment, is the reason why the area is considered a globally unique wetland.

The American flamingo (Phoenicopterus ruber ruber) comes to the area in great numbers to feed, nest and reproduce.

The beaches are also of great interest and are a protective zone for nesting marine turtles, recognized as one of the main zones of arrival of the hawksbill sea turtle (Eretmochelys imbricata) and the only one in the State of Yucatán for the green sea turtle (Chelonia mydas). Furthermore, there are 554 vertebrate species, amongst them 142 endemics.

Given its geographic position, the peninsula keeps a floristic relation with the neighboring regions of Central America, the river basin of the Caribbean Sea and southeastern Mexico. The more recent inventories report the presence of 2,477 species and 98 varieties of vascular plants.

In the last years, the vegetation has been strongly affected by human activities, particularly by agriculture and livestock raising, practices that imply the destruction of vast surfaces of vegetation. Also, it has been affected by natural catastrophes like the hurricanes that regularly hit this region and the subsequent forest fires.

The use of natural resources dates back to the pre-Hispanic period. The main productive activities today include fishing, agriculture, livestock rearing, salt extraction, tourism, aquaculture and urban development.

The ecotourism activity is stimulated to promote the participation of local inhabitants in the conservation of the natural, archaeological, historical and cultural heritage of the biosphere reserve, providing appropriate economic and social benefits.

From a cultural point of view, the territory includes an important Mayan zone dating back to the period of 300 to 50 years BC. The territory belonged to the chieftainship of Ecab in the pre-Hispanic period. In the area eighteen of the 1,585 Yucatán archaeological sites have been located. In addition, the reserve counts three of the eight concheros (banks of marine shells) that exist in the state.