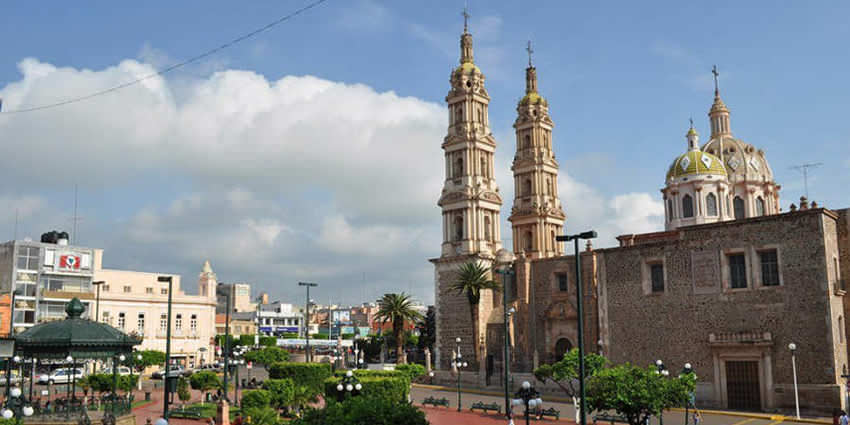 Tepatitlán de Morelos is a city and municipality founded in 1883, in the central Mexican state of Jalisco. It is located in the area known as Los Altos de Jalisco (Highlands of Jalisco), about 70 km east of state capital Guadalajara. It is part of the macroregion of the Bajío.
Its surrounding municipality of the same name had an area of 1,532.78 km².

The nickname of the city is “Tepa”. It is also the largest producer of eggs in Mexico, the largest pork producer in the state, and the primary milk basin in the country, as well as a large producer of tequila.

The fleur-de-lys can be seen in a number of public spaces and buildings, including the Santuario de Guadalupe and the internationally famous Santuario del Señor de la Misericordia, which houses an oak-carved crucifix that, according to the legend, was found by a poor farmer on the Cerro Gordo in 1835.

Every year from the 25 to the 30 April, the city hosts the Feria Tepabril which celebrates the Señor de la Misericordia.

Tepatitlán means “Hard Stone Place”, in the Nahuatl language. But recent artifactual discoveries indicate that the name may actually have a different meaning than the one that is conventionally accepted. The matter has yet to be settled conclusively by scholars and officials.

The more catholicism was taking footholds in Mexico, the more visions and divine signs had the brand-new Christians.

According to one more popular legend, in 1835, Don Pedro Medina, a poor, old farmer, saw from the outside of his home in the countryside an intense light, coming from the Cerro Gordo.

The first few days, he thought it must have been some kind of coal or wood furnace. But he kept seeing the light for a few more days, so he decided he would climb the mountain up to the place to see what was going on.

When he finally got to the place where he had seen the light, he found nothing, until he turned his head towards an oak tree, and found in it, an image slightly reminiscent to a crucifix.

He was so amazed, he decided it he wanted everyone to see his “Father” as he called it, and so, decided to chop the tree down, and take it into the city.

Pedro Medina was a poor man, so to get it from up on the mountain, to his ranch, he had to ask his neighbor for a couple of oxen to bring it down.

However, when they cut the image down, and attached it to the oxen, it would not move, so Medina told his “compadre” to turn the image face up, and as soon as they did this, the oxen moved with immense ease.

In town, the adoration to the holy image grew so big, that Don Pantaleon Leal offered Don Pedro Medina his home as a shrine to the image.

And after a few years, in 1831, the Shrine erected in his honor stands, and every year, the city fills with over 2 million visitors to adore him and ask him for favors.

His feast is celebrated on 30 April, day on which he was brought into his current shrine, and grand festivities are held, for he is the patron of the city.

According to the 2010 Census by INEGI, the municipality has a population of 136,123, of which 104,377 live within the city limits of the municipal seat, Tepatitlán, and the rest in the outlying communities and ranches.

The city is the state’s seventh-largest incorporated community and serves as a significant city outside of the capital, providing the most important university in the region of Los Altos, and an important economic and business center.

Around 81% of the population of the municipality is urban, concentrated mostly in the municipal seat, and other large towns.

The annual growth rate is at about 18.9%, placing it among the fastest-growing populations in the state of Jalisco.

Its most distinctive feature is the Baroque-style parish church in the centre of the city dedicated to Saint Francis of Assisi, pictured below, although it has many other attractive locations.

The kiosk that sits on the Plaza de Armas in downtown – of gracious and elegant design and ornamented with iron, it was built in France, and brought to the city.

The city hall (Palacio Municipal) is one of the most distinctive features in the city, built in neoclassic-baroque style.

The Temple of San Antonio

Although it has a simple architectural design, it became famous when during the Cristero War (1926–1929), the federals and the religious would crossfire from the tower of the temple, to the towers of the San Francisco Church.

Created with one neoclassic style, with baroque reminiscence, this grand temple was built from 1742–1775, from piedra braza. It is topped with two slender neoclassical towers, 63m in height each, and three airy domes, all designed by the tepatitlense mason, Don Martín Pozos. The façade is dominated by a curious architectural element: a semi-hexagonal pórtico, which was added as a support for the heavy and slender towers which, as Pozos was told, would collapse if he did not add support.

On the inside, it is decorated by the main altar, constructed entirely of white marble from Carrara, and the sculptures of the four Evangelists, sculpted by the Italian architect Augusto C. Volpi, who’s depiction of St. John is detailed with such exquisite beauty, it doesn’t stand any less than Michelangelo’s David.

Another great example of the local craftsmanship is the sculptural group of La Piedad, carved in oak wood by Agustín Espinoza, which has been compared, kept in due proportion, to Michelangelo’s Pietà. One of the most remarkable facts of this church is its clock, located on the south tower, facing the Plaza de Armas, which has been giving the time to the residents for 141 years non-stop.

The Santuario del Señor de la Misericordia, the temple of San Antonio, with a great history during the second Cristero War, the building that houses the City Museum, and various constructions of the 19th century, are many other attractive sites in the city which are worth a visit.

It was in 1727, that the older “town hall” was expanded with the terrain donated by Mrs. Elena de la Rua, and after it started functioning as city hall, it was completely remodeled from 1905–1908 under the direction of Don Francisco de Paula Palomar, who designed it with a near-neoclassic style, mixed with French Baroque in its decor; and in 1954, it was added to the design its current aspect, so jolly, and unique in the western Mexico.

Of neoclassic style, the City Hall is regarded as one of the most beautiful of the region. It is a two-story building that holds on the walls of the staircase, a mural of the history of the city, measuring 80m² Its three façades form a design of undeniable beauty which gives it is lordship and poise for City Hall.

The area was primitively inhabited by the Otomi people, a hunter-gatherer society.

After that, the Tecuexe arrived in the area, also known as the tecuanni, which means cruel or sanguinary, as a reference to their fighting nature.

The city had various locations across time: the first, known as Pueblo Viejo in the Raumalelí hill; afterwards, they moved to the Cerrito de la Cruz, which today is home to a famous hilltop chapel, and finally, under the leadership of Mapelo, to its current location.

In the year of 1530, the Spanish captain Pedro Almíndez Chirinos arrived to the area, sent by Nuño Beltrán de Guzmán to explore the region up to the state of Zacatecas, and so he arrived to Zapotlán del Rey, Acatic, Zapotlán el Grande, and Tepatitlán, ending up in the Cerro Gordo.

During the Mexican War of Independence, the village’s population, composed and dominated by some Creoles and Mestizos, showed itself to be indecisive about joining the war effort, but after Independence Father Miguel Hidalgo y Costilla entered triumphantly in Guadalajara, the indifference turned into enthusiasm for the cause.

One Tepatitlense, Col. Albino Barajas took part as an insurgent in the Battle of Calderón Bridge.

By decree of 27 March 1824, Tepatitlán turned into one of the 26 departments into which the state of Jalisco was divided, and was conceded the title of villa.

From that same year, it became part of the Third Canton, seated in La Barca, situation in which it remained until the early 20th Century, when the state’s territorial division in cantons disappeared.

During the regime of the Second Mexican Empire under Maximilian I of Mexico, according to the provincial statute of 10 April 1862, Tepatitlán, together with most other villages in the Los Altos region, became part of the Department of Aguascalientes.

By decree number 41, published 20 September 1883, the town has conceded the title of the city, with the denomination Tepatitlán de Morelos in honor of the Revolutionary insurgent José María Morelos y Pavón.

1530: Led by Captain Pedro Almíndez Chirinos, a group of Spanish men arrives to the area previously inhabited by Otomí Indians

1742: Construction of the San Francisco Parish is begun in the middle of a settlement

1811: On 19 April, the peoples of the city endorse Rev. Ramos, who besieged the city of Tepatilán, fighting fiercely for eight consecutive hours against the so-called “Faithful Royalists” after which he took the Plaza de Armas, which was named de Armas (of Arms) after this incident

1864: On the first of January, Tepatitlán was invaded by the French troops of Zuavos Argelinos (from North Africa) who were led by General Bazaine, and destroyed part of the municipal Archive. Afterward, various groups, led by the French Commanders Munier and Ceynet, fough fiercely against the guerrillas, who led by Rafael “El Chivo” Nuñez, Mauro Vázquez, Lucio Benavides, Félix Pérez, Francisco Cabrera, and other leaders, fought for liberty from the French rule; especially Colonel José Antonio Rojas, who at the head of his 1,000 “Rojeño” riders took in one month four important plazas (quite apart from each other): Zacatecas, Aguascalientes, Ciudad Guzmán and Tepic

1883: On 20 September, decree no. 41 was published, whereby the “Villa” of Tepatitlán de Morelos was declared a city by the Governor of Jalisco

1927–1929: Tepatitlán was witness and actor in the battles between Cristeros and Federals during the Cristero War; within its urban perimeter, the bloodiest battle of the whole war was fought, and on that sole day, the federal army lost more than 3,000 troops.

Tepatitlán has a humid subtropical climate that is close to a tropical savanna climate with dry, mild winters and warm, wet summers.

Its lands are “skinny”, but have been transformed into productive due to the efforts of the citizens.

The beautiful flora includes trees such as ash, which grows in profusion, maroon walnut, eucalyptus, licorice and some acacias. It is a paradise for citrus. the canyon of the Rio Verde, with its tropical climate at the bottom, about 500 mts. deep, contains deposits of hot springs and spectacular scenery, half-exploited by some resorts.

The fauna is somewhat reduced to common species such as rabbits, hares, snakes, bobcats, coyotes, and some pumas, which seeing their lands being invaded, migrated to feed on the cattle.

There is a relatively small amount of oaks, remnants of what was once “great oak-land”, which disappeared consumed by charcoal furnaces.

It was announced in 2009, that the Federal Government will spend around 350 million pesos on the construction of the Centro Nacional de Recursos Genéticos which will be sort of a Noah’s Ark. The center has space for up to three million species.