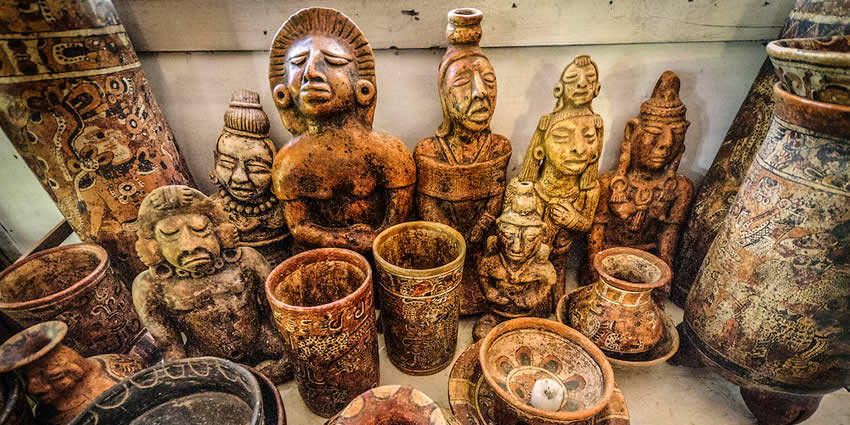 An exquisite expression of mayan art.

Mayan pottery has been part of the Mayans´ lives since ancient times.

It is also important in the study of the Pre Columbian Mayan culture, because each piece reveals stories of rulers, rituals, the story of the Maya creation, as well as other aspects of the Maya civilization.

In the early beginnings, during the Late Preclassic period from 250 BC to 250 AD, Mayan pottery consisted in elementary kitchen utensils, like bowls, pots and cupsstripes one color only or with beige stripes on red color, and sometimes with simple designs or none at all.

Many human clay figures also made their appearance.

Maya pottery has always been made of clay, which the Mayans collected at the river banks or at the edge of the cenotes, and it was tempered with sand, ashes and tiny stones.

As the Mayans did not have a potter´s wheel, all the pottery was hand modeled.

The finished vessels were then placed in the sun to dry and to harden, or put into a large hole in the ground on a fire made with wood, covering the top with a large stone.

As time went by, and social classes were established, Maya ceramics became more elaborate in form, design, color, painting techniques and purpose. The colors were mainly red, black and brown obtained from natural elements like plants and earth.

During the Early Classic period from around 250 to 550AD, many other colors were integrated in Maya pottery by mixing the paint with mineral pigments, and feet, handles and lids were added to the objects.

During the Classic period, 600 to 900 AD, the most beautiful Mayan pottery was made in many sizes and shapes, with high reliefs and bas reliefs.

It acquired paintings of Mayan kings, Mayan gods, animals and anthropomorphic creatures on cups, bowls, vases, ceremonial urns for incense called copal and on burial offerings, which were destined to the high ranking social class.

The middle class used less elaborate designs, and the working class continued using one color only and decorating the vessels with very simple motives.

Human clay figures became of outstanding beauty and perfection. Some of the most famous Mayan figures come from Jaina Island in the State of Campeche, in the Yucatan Peninsula.

Mayan clay figures were found on every archeological site, and many of them were also placed in tombs.

The orange color, which was obtained from the mexican State of Tabasco, became part of the Mayan colorancient mayan pottery range, and by adding other minerals the Mayas created the famous Mayan blue, a turquoise shade, which through Mayan trade was exported to Central Mexico and to all Mesoamerican areas.

Many of these extraordinary ceramic objects, which are the most exquisite expression of Mayan art, are exhibited in numerous museums in Mexico and in other places of the world, where you can admire the high artistic skills of the Mayan artists.

On your Yucatan travel you will have the opportunity to see several beautiful mayan ceramic plates and vessels, as well as Mayan figures, in the museums, which are inside the archaeological sites like in Chichen Itza or Dzibilchaltun.

You will find the museums also near the archeological site, like in Palenque, in the State of Chiapas.

You will be able to see museums in Merida, the capital city of Yucatan State, in Campeche city, and in Cancun and Chetumal in the Quintana Roo State as well.

You can find many of the traditional pottery kitchen vessels in modern households; and believe me, the food acquires a better taste cooked in them, and water keeps fresher in an earthen Mayan ceramic cup.

As you see, Mayan pottery is still produced in the ancient way in many places, although some artists have a potter´s wheel today.