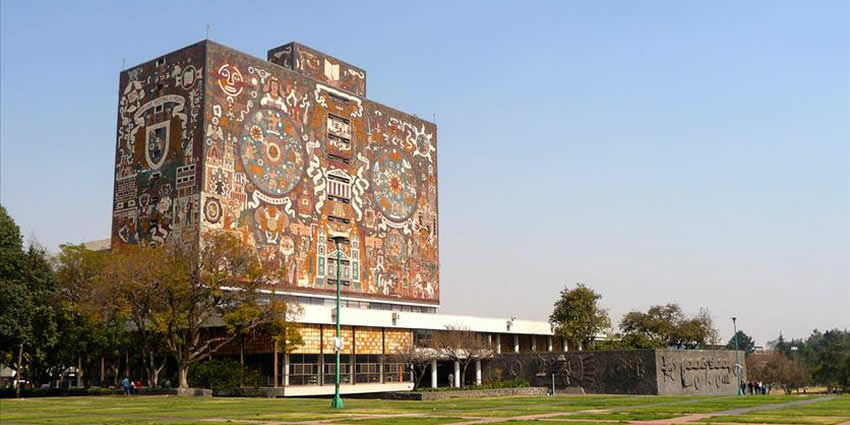 It ranks highly in world rankings based on the university’s extensive research and innovation.

UNAM’s campus is a UNESCO World Heritage site that was designed by some of Mexico’s best-known architects of the 20th century. Murals in the main campus were painted by some of the most recognized artists in Mexican history, such as Diego Rivera and David Alfaro Siqueiros.

In 2016, it had an acceptance rate of only 8%. UNAM generates a number of strong research publications and patents in diverse areas, such as robotics, computer science, mathematics, physics, human-computer interaction, history, philosophy, among others.

All Mexican Nobel laureates are either alumni or faculty of UNAM.

UNAM was founded, in its modern form, on 22 September 1910 by Justo Sierra as a liberal alternative to its predecessor, the Royal and Pontifical University of Mexico.

UNAM was the birthplace of the student movement of 1968, which turned into a nationwide rebellion against autocratic rule and began Mexico’s three-decade journey toward democracy.

The university was founded on 22 September 1910 by Justo Sierra, then Minister of Education in the Porfirio Díaz regime, who sought to create a very different institution from its 19th-century precursor, the Royal and Pontifical University of Mexico, which had been founded on 21 September 1551 by a royal decree signed by Crown Prince Phillip on behalf of Charles I of Spain and brought to a definitive closure in 1865 by Maximilian I of Mexico.

Instead of reviving what he saw as an anachronistic institution with strong ties to the Roman Catholic Church, he aimed to create a new university, secular in nature and national in scope, that could reorganize higher education within the country, serve as a model of positivism and encompass the ideas of the dominant Mexican liberalism.

The new university’s challenges were mostly political, due to the ongoing Mexican Revolution and the fact that the federal government had direct control over the university’s policies and curriculum; some resisted its establishment on philosophical grounds.

This opposition led to disruptions in the function of the university when political instability forced resignations in the government, including that of President Díaz. Internally, the first student strike occurred in 1912 to protest examination methods introduced by the director of the School of Jurisprudence, Luis Cabrera.

By July of that year, a majority of the law students decided to abandon the university and join the newly created Free School of Law.

In 1914 initial efforts to gain autonomy for the university failed. In 1920, José Vasconcelos became rector. In 1921, he created the school’s coat-of-arms: the image of an eagle and a condor surrounding a map of Latin America, from Mexico’s northern border to Tierra del Fuego, and the motto, “The Spirit shall speak for my race”.

Efforts to gain autonomy for the university continued in the early 1920s. In the mid-1920s, the second wave of student strikes opposed a new grading system. The strikes included major classroom walkouts in the law school and confrontation with police at the medical school. The striking students were supported by many professors and subsequent negotiations eventually led to autonomy for the university. The institution was no longer a dependency of the Secretariat of Public Education; the university rector became the final authority, eliminating much of the confusing overlap in authority.

During the early 1930s, the rector of UNAM was Manuel Gómez Morín. The government attempted to implement socialist education at Mexican universities, which Gómez Morín, many professors, and Catholics opposed as an infringement on academic freedom. Gómez Morín with the support of the Jesuit-founded student group, the Unión Nacional de Estudiantes Católicos, successfully fought against socialist education.

UNAM supported the recognition of the academic certificates by Catholic preparatory schools, which validated their educational function. In an interesting turn of events, UNAM played an important role in the founding of the Jesuit institution in 1943, the Universidad Iberoamericana in 1943.

However, UNAM opposed initiatives at the Universidad Iberoamericana in later years, opposing the establishment of majors in industrial relations and communications.

In 1943 initial decisions were made to move the university from the various buildings it occupied in the city center to a new and consolidated university campus; the new Ciudad Universitaria (lit. University City) would be in San Ángel, to the south of the city.

The first stone laid was that of the faculty of Sciences, the first building of Ciudad Universitaria. President Miguel Alemán Valdés participated in the ceremony on 20 November 1952.

The University Olympic Stadium was inaugurated on the same day.

In 1957 the Doctorate Council was created to regulate and organize graduate studies.

Another major student strike, again over examination regulations, occurred in 1966. Students invaded the rectorate and forced the rector to resign. The Board of Regents did not accept this resignation, so the professors went on strike, paralyzing the university and forcing the Board’s acceptance. In the summer, violent outbreaks occurred on a number of the campuses of the university’s affiliated preparatory schools; police took over a number of high school campuses, with injuries.

Students at UNAM, along with other Mexico City universities, mobilized in what has come to be called Mexico 68, protests against the 1968 Mexico City Olympics, but also a whole array of political and social tensions. During August 1968, protests formed on the main campus against the police actions on the main campus and in the center of the city. The protests grew into a student movement that demanded the resignation of the police chief, among other things. More protests followed in September, gaining frequency and numbers. During a meeting of the student leaders, the army fired on the Chihuahua building in Tlatelolco, where the student organization supposedly was. In the Tlatelolco massacre, the police action produced with many dead, wounded and detained. Protests continued after that. Only ten days later, the 1968 Olympic Games opened at the University Stadium. The university was shut down for the duration.

The 1970s and 1980s saw the opening of satellite campuses in other parts of Mexico and nearby areas, to decentralize the system. There were some minor student strikes, mostly concerning grading and tuition.

The last major student strike at the university occurred in 1999–2000 when students shut down the campus for almost a year to protest a proposal to charge students the equivalent of US$150 per semester for those who could afford it. Referendums were held by both the university and the strikers, but neither side accepted the others’ results. Acting on a judge’s order, the police stormed the buildings held by strikers on 7 February 2000, putting an end to the strike.

In 2009 the university was awarded the Prince of Asturias Award for Communication and Humanities and began the celebration of its centennial anniversary with several activities that will last until 2011.

The UNAM has actively included minorities into different educational fields, as in technology. In 2016, the university adopted United Nations platforms throughout all of its campuses to support and empower women.

“Ciudad Universitaria” (University City) is UNAM’s main campus, located within the Coyoacán borough in the southern part of Mexico City.

It was designed by architects Mario Pani, Enrique del Moral, Domingo García Ramos, Armando Franco Rovira, Ernesto Gómez Gallardo and others, and it encloses the Estadio Olímpico Universitario, about 40 schools and institutes, the Cultural Center, an ecological reserve, the Central Library, and a few museums.

It was built during the 1950s on an ancient solidified lava bed to replace the scattered buildings in downtown Mexico City, where classes were given. It was completed in 1954, and is almost a separate region within Mexico City, with its own regulations, councils, and police (to some extent), in a more fundamental way than most universities around the world.

Apart from University City (Ciudad Universitaria), UNAM has several campuses in the Metropolitan Area of Mexico City (Acatlán, Aragón, Cuautitlán, Iztacala, and Zaragoza), as well as many others in several locations across Mexico (in Santiago de Querétaro, Morelia, Mérida, Sisal, Ensenada, Cuernavaca, Temixco and Leon), mainly aimed at research and graduate studies. Its Center of Teaching for Foreigners has a campus in Taxco, in the southern Mexican state of Guerrero, focusing in Spanish language and Mexican culture for foreigners, as well as locations in the upscale neighborhood of [Polanco] in central Mexico City.

Museums and buildings of interest

Under the care of the School of Engineering, UNAM, the Colonial Palace of Mining is located in the historical center of Mexico City.

Formerly the School of Engineering, it has three floors, and hosts the International Book Expo (“Feria Internacional del Libro” or “FIL”) and the International Day of Computing Security Congress (“DISC”). It also has a permanent exhibition of historical books, mostly topographical and naturalist works of 19th-century Mexican scientists, in the former library of the School of Engineers.

It also contains several exhibitions related to mining, the prime engineering occupation during the Spanish colonization. It is considered to be one of the most significant examples of Mexican architecture of its period, conceived by Manuel Tolsa during de Spanish colonial rule in a neoclassical style (18th century).

The House of the Lake, in Chapultepec Park, is a place devoted to cultural activities, including dancing, theater, and ballet. It also serves as meeting place for university-related organizations and committees.

This museum and cultural center is considered to be the birthplace of the Mexican muralism movement. San Ildefonso began as a prestigious Jesuit boarding school, and after the Reform War, it gained educational prestige again as National Preparatory School, which was closely linked to the founding of UNAM.

This school, and the building, closed completely in 1978, then reopened as a museum and cultural center in 1994, administered jointly by UNAM, the National Council for Culture and Arts and the government of the Federal District of Mexico City.

The museum has permanent and temporary art and archaeological exhibitions, in addition to the many murals painted on its walls by José Clemente Orozco, Diego Rivera and others. The complex is located between San Ildefonso Street and Justo Sierra Street in the historic center of Mexico City.

The Chopo University Museum possesses an artistic architecture, large crystal panels and two iron towers designed by Gustave Eiffel. It opened with part of the collection of the now-defunct Public Museum of Natural History, Archeology and History, which eventually became the National Museum of Cultures.

It served the National Museum of Natural History for almost 50 years, and is now devoted to the temporary exhibitions of visual arts.

The National Astronomical Observatory is located in the Sierra San Pedro Mártir mountain range in Baja California, about 130 km south of United States-Mexican border. It has been in operation since 1970, and it currently has three large reflecting telescopes.