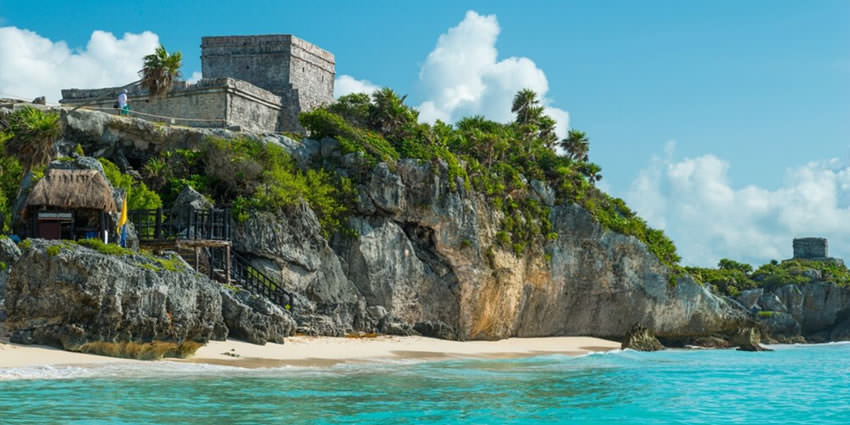 The key that will open the doors to Mexican culture, its mysticism, and, ultimately, its ancestral origins are found represented in the temples of Mexico, which stand in all their splendor in this magical land.

The best pre-Hispanic temples in Mexico

Mexico stands as a multicultural center, where various languages, traditions, and races meet. Through the very diverse pre-Hispanic temples that rise inside, we can find some of these vestiges.

The temples of Mexico that we cannot miss when we travel to this corner of the world are the following:

Nohoch Mul in the Mayan city of Cobá

The sacred temple erected in the center of the Mayan city of Coba is represented by an imposing pyramid baptized with the name of Nohoch Mul. At 42 meters high, the pyramid is one of the tallest recorded to date from this ancient culture.

Unlike what happens with other temples turned into ruins, the Nohoch Mul pyramid preserves its 120 intact steps, which tourists will be able to ascend without complications and thus contemplate from its top an unparalleled view of the entire Mayan jungle.

With an architectural style similar to that of Chichén Itzá and Uxmal, this monument is located in an area protected by the authorities.

Pyramid of the Niches in Tajín

Possibly one of the most impressive pre-Hispanic temples in Mexico from an aesthetic point of view is the so-called Pirámide de Los Nichos, built in the state of Veracruz.

As one of the most representative symbols of the Totonaca culture, this temple, as its name indicates, is full of niches, mural paintings, and reliefs that, without a doubt, become a window to the past.

A past that takes us to the so-called city of the smoking temples because copal was frequently burned in their buildings to carry out their rituals.

Erected as one of the most representative enclaves of the Zapotec and Mixtec culture, Monte Albán concentrates in its interior very diverse sacred buildings and houses that were inhabited by different cultures over time.

The political, religious, and military elites resided inside the ceremonial enclosure, while the rest of the buildings that were built imitating the shape of the hills were raised on the slopes.

Monte Albán was a warrior town, in whose temples human sacrifices were made to alleviate the gods’ thirst for revenge.

Pyramid of the Magician in Uxmal

In the archaeological zone of Uxmal, the so-called Pyramid of the Magician rises, which is associated with a legend that tells how this sacred building was erected during a single night by a dwarf, born of the interior of an egg found in turn by a witch very close to Uxmal.

This tiny being comes into the world with a gift: the ability to divine the future, hence his name.

We are facing an imposing 35-meter Mayan construction, with narrow and steep steps. They were built in this way with the idea that those who climbed them could not lift their heads while doing so nor could they turn their backs on their gods while doing so.

Possibly, one of the best known and most relevant archaeological sites of the Mayan culture in Yucatán is Chichén Itzá, inside which stands the Kukulkán pyramid, considered one of the wonders of the modern world.

Also known by the name of El Castillo, this construction demonstrates the deep knowledge of the Mayans in mathematics, geometry, acoustics, and astronomy.

Being an agricultural society, the Mayans were able to carefully observe the behavior of the seasons and the variations in the trajectories of the Sun and stars. Combining all their knowledge, they were able to reflect it in the temple dedicated to the god Kukulkán.

Pyramids of the sun and the moon in Teotihuacán

These temples, located in the well-known archaeological site of Teotihuacan, were considered the very home of the gods.

The Pyramid of the Sun is one of the most important of this archaeological site, standing in the center of the Calzada de Los Muertos, between the Pyramid of the Moon located in the south and the citadel in the north.

For its part, the pyramid of the Moon is located in the northern part of this ancient city. Its contour is called Tenan, which means “mother or protector of stone.”

El Castillo is one of the largest temples in Mexico among the ruins of Tulum. Sitting practically on the edge of the cliff from where you can see the Caribbean Sea, it has three entrances, two vaulted chambers, and a lintel supported by two columns that remind us of the figure of a snake.