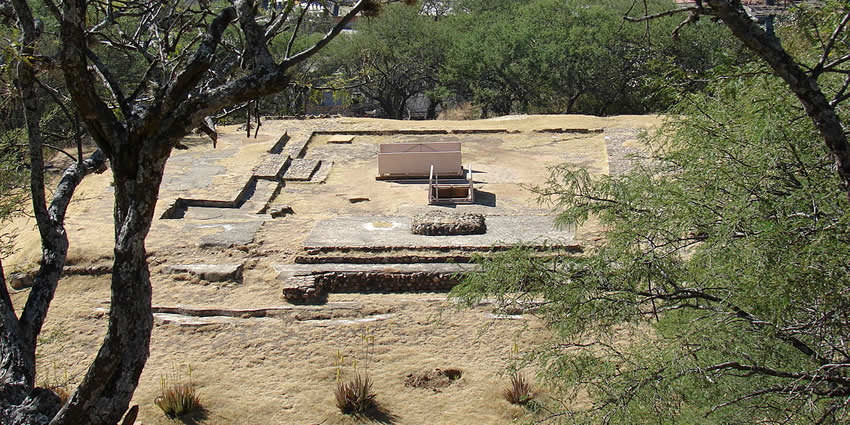 It was a powerful Mesoamerican city in what is now Oaxaca, Mexico, 6 km (3.7 mi) from the city of Oaxaca.

The city is named after Zaachila Yoo, the Zapotec ruler, in the late 14th and early 15th century. Zaachila was home of Donaji- the last Zapotec princess.

Zaachila is now an archaeological site.

A large unexplored pyramid mound is in the center in which two tombs were discovered in 1962. These tombs are thought to belong to important Mixtec persons.

Following the fall of Monte Alban, Zaachila became the last Zapotec capital. Sometime before the arrival of the Spaniards, the capital was conquered by the Mixtecs.

The history of the pre-Hispanic city is unclear. One theory is that the site flourished 1100 and 1521 AD. Another theory is that the city was founded in 1399 and could be compared to Tenochtitlan, as it was a city in the middle of a lake.

The full extent of the ancient city is not known either, principally because excavation is impeded by the fact that most mounds have inhabited structures on them.

In 1971 new excavations found two more tombs registered with the numbers 3 and 4. Even though the offerings were simpler than the ones found by Gallegos, tomb 4 end up being of special interest because of the paint remains found on its lintel.

Unfortunately, tree roots and rain filtrations have damaged the designs, according to Acosta (1972) they represent skulls and cross bones over a red colored background.

Since 1990 the project “La pintura mural prehispánica en México” of the Institute of Aesthetic Research of the National Autonomous University of Mexico, it is dedicated to record and study of the pre-Columbian murals, like those from Zaachila.

Due population growth and neglect of the authorities a housing project was authorized which has add up to the damage and pillaging of this valuable archaeological site.

Nowadays, in this community barter is a common practice, every Thursday lots of merchants came to this place to interchange and sale their products.

The Goddes Pitao Ko Shuub is chosen among several young women who previously enrolled in a contest, the main demanded features are: the long black hair, they must have brown skin and share a theme of the history of Zaachila. The chosen one will be host of all the activities of the festival.

Has the young women, the 10 neighborhoods that conform the town organize months before the festival to represent the most iconic dances of various regions of Oaxaca, like: “La Flor de la Piña de Tuxtepec (the pineapple flower of Tuxtepec),” “El Jarabe de Ejutla,” “Las Chilenas de la Costa,” “El Jarabe Mixe,” “Los Bailes del Itsmo de Tehuantepec,” and has a central valley special input we found the “Dance of the Feather” and “Los Zancudos,” this last one is performed by young men on stilts almost 5 feet tall.

In this festivity the ejidal authorities get involved, and they are in charge of giving to the participants tepache (a fruit fermented beverage), mezcal, atole and tamales.

This festival is one of the most colorful and joyful of the region because in this festival cultural events, calendas, parades, culinary samples and other events are celebrated too.