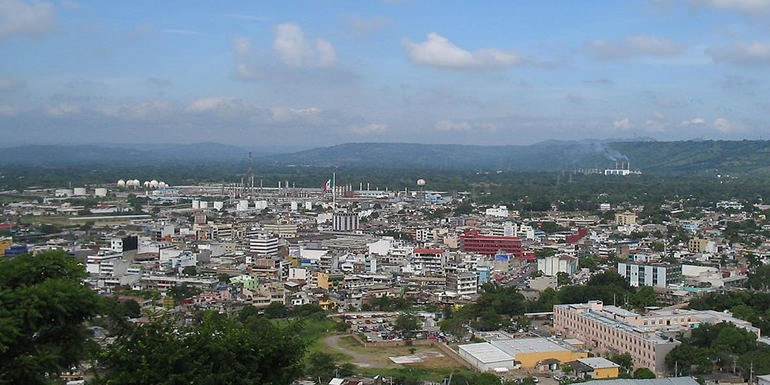 Poza Rica, formally Poza Rica de Hidalgo is a city and its surrounding municipality in the Mexican state of Veracruz.

Its name means “rich well”, because it was a place known for its abundance of oil. In this century oil was discovered in the area. It has since been almost completely extracted. This has resulted in the decline of oil well exploration and drilling activities, though there are still many oil facilities.

The area is intensely tropical, with two popular beaches within one hour, Tuxpan, and Tecolutla, and one within 40 minutes east, Cazones. Mexico City is about 220 kilometers (140 mi) from Poza Rica.

Unlike most Mexican cities, it does not have old buildings because it is a new city founded officially on November 20, 1951. For that reason it has contemporary architecture with well-lined and designed streets with a modern look.

Poza Rica is close to the Costa Esmeralda, the northern beaches of Veracruz, such as Tecolutla, Tuxpan, Cazones and Playa Esmeralda.

The center of the city sits in a small valley on the basin river Cazones, in the coastal plain of the Gulf of Mexico, with an average altitude of 60 m, although most of the land sits on uneven ground and mostly hills northeast of the city, among which is the Cerro del Meson, with a maximum height of 242 meters. The predominant soils are of the vertisol type, with a high content of clay forming expansive cracks in dry seasons.

Since its inception, the rapid urban growth in extension exceeded the capacity of available flat land in the city, expanding the urban area to the northeast of the city, using increasingly uneven ground and hills bordering the town of Papantla, inhabiting the slopes of the hills that surround the city center.

The town of Poza Rica is located in the watershed of the river Cazones, this River 100 km long born in the mountainous region of Hidalgo and flows into the Gulf of Mexico, has a higher average annual runoff of 40 m³ / s in its mouth. The city is also surrounded by several Cazones River tributary streams such as the Mollejón, Hueleque, Salsipuedes and Arroyo Corn, which is regularly affected by flooding the annual rainy season.

Mexico’s only nuclear power plant (Laguna Verde) is about 200 kilometers (120 mi) away, near the state’s capital city of Xalapa, Veracruz.

The city of Poza Rica has 36 parks. The most important are:

Parque Plaza March 18. It is the city’s central park is located between Avenues Lazaro Cardenas and Calle 8 Norte. It has an auditorium for musical events. It also attracts young people who practice hobbies such as rollerblading and biking.

Juarez Park. It is the second largest park in the city, located on 16th Avenue West.

Parque de las Americas. The park features all the flags of America, and is located on the hillside.

The main destinations are the beach which is just 45 kilometers from the city center as well as the archaeological site of El Tajin, where every year a summit is held. Another attraction is the Tajin Teayo Castle.

As for the local cuisine, this is distinguished by typical regional dishes Totonac and Huastec, of which the best known is the Zacahuil, plus a variety of typical Mexican snacks, among which are sopes, bocoles, molotes, tlacoyos, enchiladas, and blanditas.

The UNESCO World Heritage Site of El Tajin is 15 kilometers (9.3 mi) away. It has a downtown area which provides a good shopping experience. It has a local famous height called “El cerro del abuelo” where it’s possible to see the whole city and its “quemadores”, big petroleum burners which were used to light the city in the early years. There are few of them at the present time.

Every year there is a holiday called “Desfile del 18 de marzo” (March 18 Parade, “Petroleum Day”) which commemorates Mexican oil expropriation and has two beautiful parades, one in the morning and one in the afternoon.

Public transport is the main means of transport of pozarricenses. Transport in the city are buses that take you to different areas of the city, as well as shared taxis.

Poza Rica taxis are the tsuru model that move around the city.

Central Bus Terminal: For land transport with the rest of the country, Poza Rica has three bus terminals: