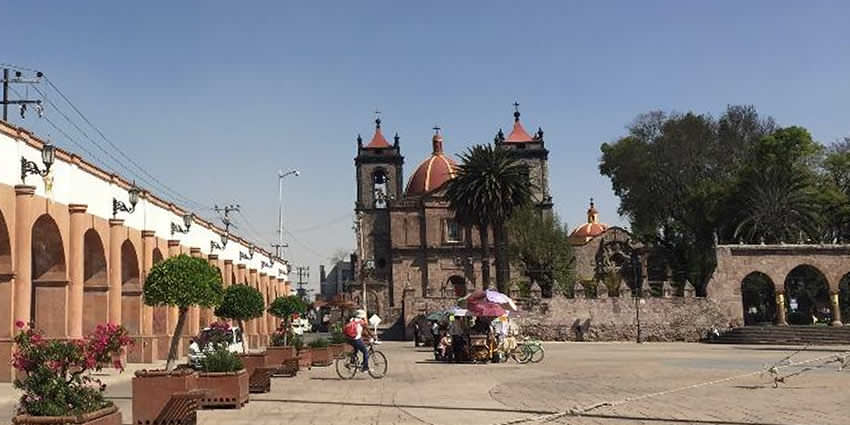 Tultitlán de Mariano Escobedo is the seat of the municipality of Tultitlán located in the northeastern part of the state of México in Mexico. It lies adjacent to the northern tip of the Federal District (Distrito Federal) and is part of the Greater Mexico City urban area.

Both the city and the municipality are interchangeably known as San Antonio Tultitlán or simply Tultitlán, a name which comes from Náhuatl meaning “among the tule plants”.

“de Mariano Escobedo” was added to the city’s name in 1902 in honor of the general who fought in the Mexican-American War and for the liberals during the period of La Reforma with Benito Juárez.

In the area have been found the bones of mammoth and other animals, excavated starting in 1991.

It is an important site because it establishes the presence of man here to about 15000 – 13000 BC, making it one of the oldest human settlements in the Americas.

Ceramic pieces here date to about 400 BC. Teotihuacan presence is documented around 200 to 750 AD, mostly agricultural villages that also produced items like baskets and rope.
Between 850 and 1110, the area was inhabited by peoples speaking Náhuatl and Otomis, while the area was under Toltec domination from the city of Tula (located in the present-day state of Hidalgo).

The current city was founded by the Tepanecas in 1356, but its first tlatoani (chief), named Cuauhtzinteuctli, did not begin his rule until 1408.

The city’s last tlatoani died in 1519 of measles brought over by the Spanish.

After the Spanish Conquest, the area was reorganized into large haciendas with the city of Tultitlán under the jurisdiction of Tacuba.

In 1645, an image of San Antonio de Padua arrived and became the town’s patron saint.
The small village remained so until 1969 when it was named a town, attaining city status in 1997.

Principal sites to see in the city include the Temple of San Lorenzo from the 16th century and modifications dating from the 18th century to the 20th century.

The Temple of San Antonio de Padua was initiated in the 18th century and finished in the 20th.

The Chapel of the Holy Cross (Capilla de la Santa Cruz) was probably begun in the 17th century and is now integrated into the new municipal palace.

Aside from these constructions is a cypress (ahuehuete) located in the center of the city that is at least 250 years old.

The municipality was established in 1820. It has two geographically separate sections. The larger southwestern section of the municipality, which contains its municipal seat, borders the municipalities of Cuautitlán, Tultepec, Coacalco de Berriozábal, Tlalnepantla, Cuautitlán Izcalli and the Gustavo A. Madero borough of Mexico City.

The two sections are separated by the municipalities of Tultepec and Coacalco, which border both sections.

The area is subtropical due to its altitude with rainy and dry seasons. It divides into two geographic zones: the plains and the mountain range of La Sierra de Guadalupe, which extendes into various other municipalities and was declared an ecological park.

The area is a source of building materials such as stone, and agricultural activities such as the grown of corn, alfalfa and fruit trees is still practiced.

However, the urbanization of the area is diminishing the land dedicated to these activities. Industry is now the major employer with entities devoted to chemicals, cardboard boxes, plastics, and various types of metal production.

One of the most famous attractions in Tultitlan is the San Antonio Local Festival. Each year, it falls on June 14 when all the people from the neighboring areas of Tultitlan centers around the town’s parish church to worship San Antonio de Padua, the saint who gives name to the town. The figure of the saint is carried along the streets among the crowd of people and musicians until it finally arrives to the church.

The festival begins on June’s first days and is extended almost for one month. Along the Festival there are many things to see such as the traditional pottery from the region and other handcraft objets produced in Mexican states. People can also appreciate the beautiful fireworks that are always fired up every night from the beginning to the end of the festival. It is also a perfect opportunity to explore the center of the plaza where many traditional food is found such as quesadillas, pambazos, tlacoyos, huaraches, tacos, baked bread, barbacoa made of sheep and other appetizers like strawberries in cream,fried sausages and many traditional candies (cocada, alegria, chilacayote and obleas). In addition to this food the inhabitants also can find a great variety of strange drinks made with combinations of vodka, beer, whisky, ron, tequila, coke and mineral water.

Walking along the locals found in the streets there is a special area where many sorts of farm animals are placed. Many explorers stop here to get sheep, turkeys, chicken, pigs and even cows. For a low price they can get a new pet that would require a huge space at home.