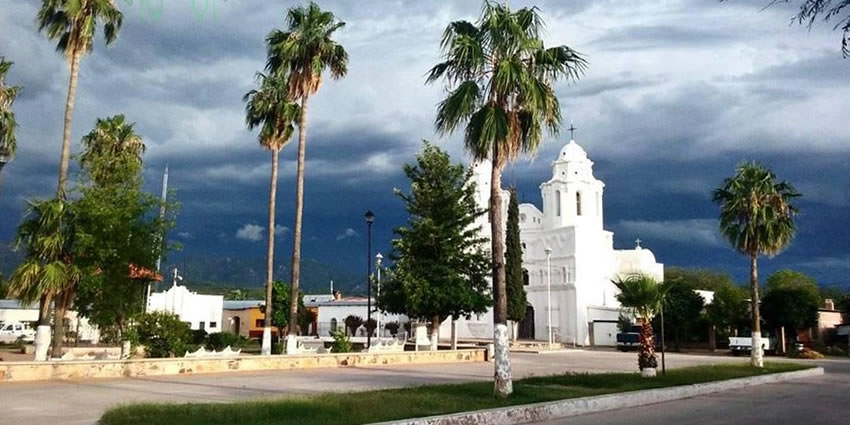 Bacadéhuachi is a Mexican small town located in the northeast of the state of Sonora, in the upper area of ​​the Sierra Madre Occidental.

It is located 277 km east of Hermosillo, the state capital, 295 km south of the border city of Agua Prieta, and 409 km northwest of the port city of Heroica Guaymas.

The meaning of its name comes from the indigenous language of the Opatas, originally as “Bacadeguatzi” which comes from linguistic roots: Baca which means “reed”, degua, which means “entrance or door” and tzi which means “place”.
In other words, Bacadéhuachi means “At the entrance of the reed”.

In times prior to the year 1600, this area was inhabited by Opata indigenous settlements. It was until the year 1645 that it was founded by the Jesuit missionary Cristóbal García, as a mission and named San Luis Gonzága de Bacadéhuachi.

Soon it became an important population center in its early years, due to the essays given by various evangelists.

After the Independence of Mexico, a justice of the peace was in charge of the administration of the town. Later, in the second half of the 19th century, the municipal category was obtained for the municipality of Bacadéhuachi, which was attached together with the District of Moctezuma (today Municipality of Moctezuma).

On November 1, 1916, while the Yaqui war was being fought in the state, the town was attacked by the Yaqui tribe, but General Gilberto R. Limón came out in defense of the settlers, remaining a local hero.

The town of Bacadéhuachi is located in the northeast of the state of Sonora, at an average height of 702 meters above sea level.

Its territory is surrounded by foothills of the Sierra Madre Occidental, with rugged, flat, and semi-flat areas, highlighting the Bacadéhuachi, 8 Azul, and Los Mojones mountains.

The Bavispe River, which constitutes the upper current of the Yaqui River, enters the jurisdiction of Bacadéhuachi from the municipality of Granados, receives the waters of the Bacadéhuachi stream, and continues to Tepache and Divisaderos.

The rainy period occurs in summer, in the months of July and August with an annual average rainfall of 483 millimeters and with occasional frosts from January to February.

The church was partially rebuilt in 1887, after being damaged by an earthquake.

Its architecture shows gold stews and New Spanish paintings. It consists of 88 figures in its interior that go from the 17th to the 20th century, which were included in the inventories carried out by the National Institute of Anthropology and History (INAH) through the Registry of the National Identification Program and Furniture Catalog of Historical Monuments.