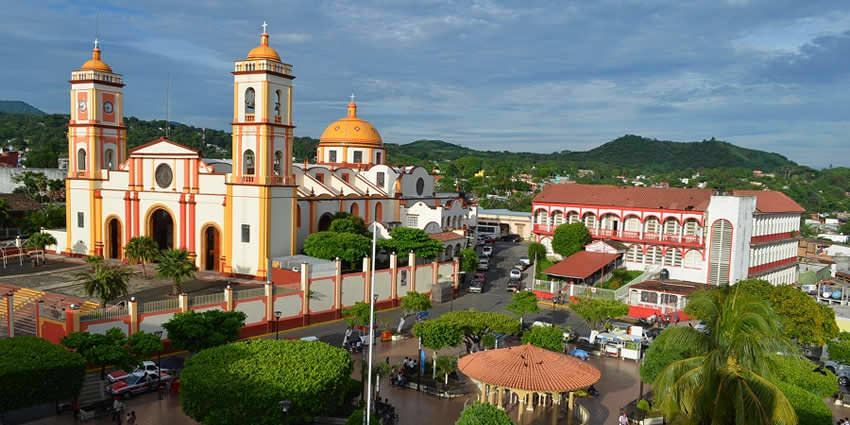 San Andrés Tuxtla is a city and municipality is the south of the Mexican state of Veracruz.

The city is the largest in the Los Tuxtlas region. It was founded after an eruption of the San Martín Volcano pushed people into this valley during the early colonial period.

Since the 19th century, the area has been the center of Mexico’s production of fine tobacco, mostly used in the making of cigars. The best known cigar producer here, Te Amo, is considered to be one of the best brands in the world.

The coastline of San Andrés Tuxtla municipality has a number of beaches which are promoted under the name of Costa de Oro, along with Puerto de Balzapote, a fishing village.

The city of San Andrés Tuxtla is the largest city in the municipality of the same name and in the entire Los Tuxtlas regions. It is located in a small valley with the San Martín Volcano towering above it.

The city is centered on a square called Parque Lerdo, which has a circular kiosk in the center. Every Sunday the city sponsors cultural events such as art exhibitions and traditional music and dance, such and fandango and zapateado dance. Much of this reflects Afro-Mexican influence.

The main structure is the Cathedral of Saint Joseph and Saint Andrew, built in 1870 with sleek bell towers and a sober facade with Neoclassical influence. The patron saint of the city is Saint Andrew, who is celebrated on November 29 and 30. On the 29th, the main event is the running a bull figure made of reeds with the local youth.

This is followed by a parade of mojigangas, large figures of hollow cartonería on a frame, worn on the shoulders of a dancer. These figures were brought to the area by the Spanish and over time have been modified to a unique Tuxtla style. On the 30th, there is mass and a procession with a large image of the saint pulled by tractor and surrounded by mojigangas. There are also releases of sky lanterns. Another important annual event is Las Ramas on December 16, which begin Las Posadas, a type of caroling event carrying branches.

The main museum is the Regional Museum of San Andrés Tuxtla, which contains objects from the region, many of which were donated by residents. It was opened in 2008, and features artifacts from is pre Hispanic history as far back as the Olmecs and the development of the tobacco industry, especially in the 19th century. One important piece is a crucified Christ image called El Señor de Matacapan, whose pieces were found in Matacapan and reconstructed by the Instituto Nacional de Antropología e Historia.

The Casa de Cultura is on Hernandez y Hernandez Street and hold cultural events mostly attended by city residents. It also has a collection of pre Hispanic artifacts.

The city has a number of old houses with gardens and patios from the city’s heyday and Parque Chichipilco is popular with families and hold cultural events.

La Maquina Vieja is an old industrial structure dating from 1840, located just outside the city.

San Andrés Tuxtla is best known for the production of tobacco and cigars and cigarettes with their cigars considered the best in Mexico, and Winston Churchill is said to have favored cigars from the area. The area’s tobacco history began in the 19th century when Cuban and German immigrants and decided that they could grow fine tobacco and make cigars here for export to Europe.

Today, the area produces some of the finest cigars in the world. All steps from the growing of tobacco, to curing to wrapping are all done in the municipality with San Andres’s own experts to assure quality. Torcedores, or those who create the cigars from cured tobacco leaves, apprentice for two years. Many families have worked in the industry for generations, with children learning the work as children in family workshops which make both cigars and cigarettes.

The best known local producer of cigars is Te Amo in Sihuapan, ranked as among the best cigar producers in the world. The enterprise employs and average of 350 people although times of peak demand can raise this number to 1,200.

Te Amo and other producers have large “houses” in which tobacco leaves are dried and fermented using firewood and steam over a course of fifteen days. The dried and fermented leaves are rehydrated for deveining and rolling. After this, the cigars are stored for one or two years before going to market. The flavor of the cigar depends on the selected leaves. Te Amo produces five kinds of cigars which vary in diameter and length.

156.5 km of main highway, mostly state-maintained roads. The main highway through the area is Federal Highway 180.

The municipality is located in the south of Veracruz in the San Martin Mountain Range in the Los Tuxtlas region. It has rugged terrain of volcanic origin that extends to the Gulf of Mexico and an average altitude of 300 meters above sea level. The main elevations are San Martín, Mastagaga, Vigía and El Chilar. There are caverns at Roca Partida, De la Encantas, the Cerro del Borrego and Arrecife de la Poza.

Along the Gulf shore there are beaches such as Salinas Roca Partida, Toro Prieto, Arroyo de Lisa, Costa de Oro, Playa Hermosa, Los Organos, Dos de Abril, Monte Pio and Balzapote (which is also a fishing port). There are cliffs at Roca Partida.

Most of the natural vegetation of the area has been destroyed with 410.1km2 used for agriculture, 398.3km2 for pasture and 7.2km2 is urban. Ab out 36km2 contains secondary vegetation only 10.8% is forest and 94.1km2 is rainforest. The soil is poor in nutrients and is susceptible to erosion. Despite this, much of the municipality is part of the second most important biosphere reserve in Mexico, the San Andres Tuxtla Reserve. The remaining dominant natural foliage is mostly high perennial rainforest, with dunes and secondary vegetation near the coast.

Most of the municipality’s surface water is in the San Andrés River, streams such as the Sihuapan and San Juan and various small lakes. Laguna Encantada (Enchanted Lake) is an isolated lake, off the highway between the city and Sontecomapan in the neighboring Catemaco municipality. The road does not reach the lake, so it is necessary to walk about a kilometer over a rise. The name comes from the fact that its water level rises in the dry season and lowers during the rainy season. Its circumference is 1,500 meters . Other lakes include De Cuyapan, De Tizatal, Los Manantiales, Delicia and Carrizal.

On the San Andrés River is the Eyipantla Falls, located twelve km from the municipal seat. The name comes from Nahuatl and means “three furrows of water.” Legend has it that Tlaloc, Aztec god of rain, governed the Los Tuxtlas area and the waterfall was his home. The falls are part of the San Andres River, which drains Lake Catemaco on its way to the Gulf of Mexico. The falls itself is forty meters wide and fifty meters high. It is popular with tourists, to descent 400 stairs to the foot of the falls. At the top of the falls, there is a lookout point which gives view of the surrounding mountains along with the falls. The entrance to the falls is crowded with restaurants and tourist shops. Another important waterfall in the municipality is Los Organos, located between Playa Hermosa and Costa de Oro. Other waterfalls include Del Río Revolución, Salto Maquina Vieja and Tres Chorros.

The climate of the municipality varies depending on location. It is warm in all parts but the amount of rain varies to areas with most rain in the summer to those that receive abundant rainfall year-round. Average annual temperature varies from 18 to 28C and average annual rainfall varies from 1,100 to 4,600mm.

The name “Tuxtla” is derived from Nahuatl and means “place of the rabbit.” San Andrés refers to the patron saint, Saint Andrew.

In the 16th century, the area belonged to the Santiago Tuxtla province. In 1530 there was an eruption of the San Martín Volcano, which prompted the movement of people from Ixtlán to what is now the city of San Andrés Tuxtla, then called Tuzacoalco (land between the mountains). The settlement was recognized in 1580 by the head of the Tlacotalpan, Tuztla and Cotaxtla region.

Its tobacco history began in 1830 when a slow influx of Cubans and Europeans made their way here and decided that the climate was apt for the growing of fine tobacco. Today, the area produces some of the finest cigars in the world. Just prior to the Mexican Revolution the industry experienced strikes by workers, with the first occurring at the El Destino factory in 1896.

In 1932, the city and municipality’s name was changed to Los Tuxtlas, but this was changed back to San Andrés Tuxtla in 1938.