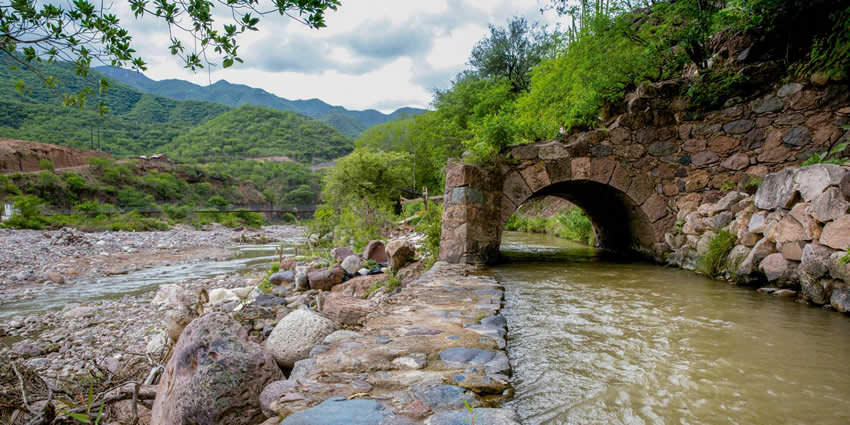 Batopilas is a small town, and seat of the surrounding municipality of the same name, in the Mexican state of Chihuahua, located along the Batopilas River at the bottom of one of the canyons that make up the Copper Canyon.

Its elevation above sea level is 578 metres (1,896 ft). The town is situated in a narrow valley, bordered by steep canyon walls.

The glorious past of its silver mining heritage barely overshadows the beauty of the homonymous gorge and everything that surrounds it: glens, rivers, exotic trees, amazing flowers and birds. However, the town’s inhabitants are undoubtedly its greatest treasure; heirs of the unique and ancient Raramuri culture.

Batoplias is the subject of an extended, discursive, but highly charged conversation between actors Marlon Brando and Alex Montoya in a pulqueria in the 1966 Hollywood movie The Appaloosa.

The main connection to the outside world is a five-hour bus connection to Creel, half of which occurs on an unpaved mountain road.

The Satevo mission, featuring a large church built four centuries ago with a mysterious past, is 8 kilometers from Batopilas, along the Batopilas River.

The climate of Batopilas falls on the boundaries of three climatic types: tropical savanna; mediterranean sub-tropical with dry summers, and semi-arid steppe.

Batopilas was established by Spanish conquistadores starting in 1632 as a center for silver mining. Over the centuries scores of hugely productive silver mines have been dug in the area; one estimate (Wilson and Panczner) is that mines in the area have produced seven times as much silver as come from the famous silver mine of Kongsberg, Norway. Little mining is now done.

Batopilas was a prominent silver-mining center from the 17th to the early 20th century. Large fortunes were made in Batopilas, most visibly reflected in a castle-like home, called the Hacienda San Miguel, that Alexander Robey Shepherd, the last governor of Washington, D.C., had built after leaving the United States in 1875. It stands across the river from the center of the village and has long been in ruins.

As of 2006 it is occupied by a number of local families that give tours to visitors for a small fee.

Spend magical moments admiring its plazas, stone bridges, river and the beautiful nineteenth century aqueduct that once formed part of the Silver Route. Lose yourself as you listen to the tales of the legends around the time of Porfirio Diaz’s presidency which tell the story of the discovery in 1708 of the most important mines of the region.

There is a cool museum, a cathedral 7 km out of town (walk, bike or drive), and some silver mining history.

The road from Creel is being upgraded, travel time currently is 3 hours 30 minutes (December 2014) and should decrease a bit. The descent at La Bufa is spectacular, drops from 2000m to 800m in about 10km. Delays due to road construction are likely. Parts of the road are still in bad condition, so a 4×4 is necessary.

There are supposedly roads going the other way, over to San Ignacio and Urique. A bridge along the road to San Ignacio was washed out in the summer of 2014 and is impassable. The road to Urique is in terrible condition according to locals, and the police do not recommend either route at this time due to security concerns.