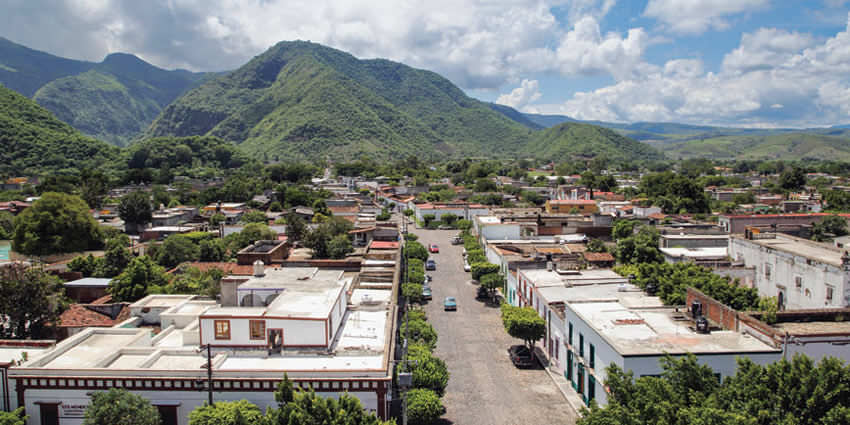 Jala is both a municipality and a town in the Mexican state of Nayarit.

The federal government of Mexico designated Jala as a “magical town” in November 2012.

With the beating of the mountainous heart and guarded by the Ceboruco Volcano stands Jala.
The hot magma shed by the volcano has given this town obsidian landscapes covered with exuberant vegetation that will allow your eyes to admire an eccentric beauty.

Through cobbled streets, you will admire the nature, history and architecture and feel the tranquility that Jala transmits to both locals and visitors.

The name Jala—place where there is a lot of sand—is derived from the Nahuatl word xali, which means sand, and the variant tla, which means place with an abundance of.

The municipality of Jala

The Rio Grande de Santiago passes in the north of the municipality.

The economy is based on agriculture with the main crops being corn (maize), sorghum, peanuts, sugarcane, and fruit trees. There is also cattle and swine raising. There are sugarcane mills, sawmills, brickworks, furniture factories, a packing plant for peaches, and several small transformation industries.

The main site of touristic interest is the volcano of Ceboruco. It is reached by an 18-km stone-covered road from the main highway. The crater is a 3-km walk up a path from the end of the road.

Ceboruco last erupted from 1870 until 1872 to produce a large flank flow of andesite.

According to researchers, in prehistoric times Ceborucco had at least 2 very large eruptions that produced 2 concentric calderas. Ceborucco rises about 1000 m above its base and has a summit elevation of 2,164 metres (7,100 ft).

The original volcano was mostly made up of thin andesite lava flows and pyroclastic layers. Since the calderas formed, however, the flows have tended to be thick. See photos at.

There is also an excavation area of an archeological site of a temple and burial grounds thought to date to 700 AD, nearby; the only round-based pyramid found.

The Basilica of Our Lady of the Assumption is a true treasure that will amaze you with its pink, yellow and green quarry combining Roman and Gothic architectural styles.