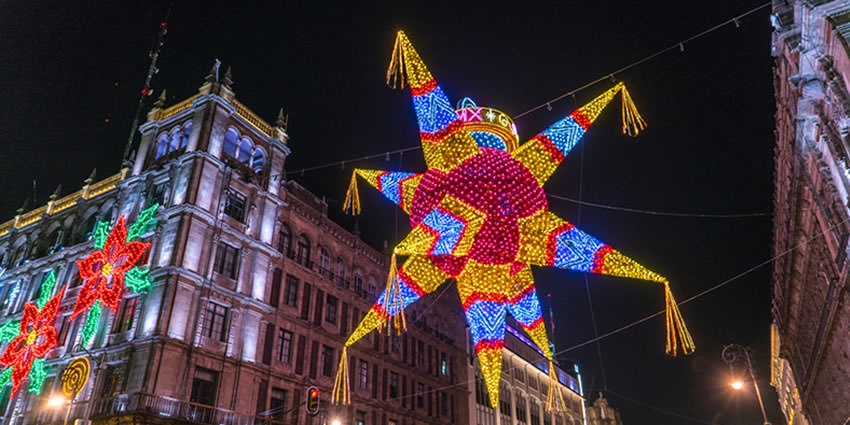 Discover some of the Christmas traditions in Mexico

Usually, it is warm and mild in Mexico during the Christmas season.

Families shop for gifts, ornaments, and good things to eat in the market stalls. They decorate their homes with lilies and evergreens. Family members cut intricate designs in brown paper bags to make lanterns called farolitos.

They place a candle inside and then set the farolitos along sidewalks, on windowsills, and on rooftops and outdoor walls to illuminate the community with the spirit of Christmas.

The Christmas season starts with bid celebrations associated with Mexico’s patroness, the Virgin Guadalupe, and then followed by the pastorelas and Las Posadas traditions.

Christmas is the perfect time to see Christmas trees, nativity scenes, and poinsettias. Mexican Christmas traditions are a combination of the influences of Spanish, German, and US traditions.

There are a mass and large feast during Christmas Eve, highlighting the arrival of the Three Kings, or Wise Men, which ends with the presentation of the images of the Child Jesus at churches and Candlemas.

What are the most popular Christmas traditions in Mexico?

The Mexican celebration of Christmas is called las posadas and is celebrated the nine days before Christmas.

From the 16th, the traditional posadas begin. These are processions, usually led by a child carrying porcelain figures representing the Virgin Mary and Saint Joseph, followed by family and friends.

The posadas, which are held every night from December 16 to 24, recreate the journey of the Virgin Mary and Joseph to Bethlehem looking for a place for the birth of the Child Jesus.

The ninth evening of las posadas is Buena Noche, Christmas Eve. The children lead a procession to the church and place a figure of the Christ child nativity scene there. Then everyone attends midnight mass.

After mass, the church bells ring out and fireworks light up the skies. Many Mexican children receive gifts from Santa Claus on this night. The children help to set up the nativity scenes in the best room in the house.

The scene includes a little hillside, the stable, and painted clay figures of the holy family, shepherds, the three kings, and animals. The children bring moss, rocks, and flowers to complete the scene.

Piñatas are another of the most popular Christmas traditions in Mexico. The piñatas are shaped like a seven-pointed star representing the seven deadly sins. By breaking the piñata (made of clay or cardboard) sin is destroyed and the sweets and fruits that are inside fall out.

For the children, the pinata party on the first eight evenings is the best part of las posadas. The pinata is a large clay or papier-mache figure shaped like a star, an animal, or some other object and covered with colorful paper streamers.

The pinata is filled with candy or small gifts and hung from the ceiling. The blindfolded children have spun around and given a big stick.

They take turns trying to break open the pinata with the stick while the pinata is raised and lowered. Everybody scrambles for the gifts and treats when the pinata shatters and spills its treasure.

The Christmas menus in Mexico

Christmas Day is a time for church and family. After church services, Christmas dinner begins with oxtail soup with beans and hot chili, followed by roasted turkey and a special salad of fresh fruits and vegetables.

Some different aspects of Mexican Christmas

Some different aspects of Mexican Christmas

In Mexico, there is also the tradition of placing a nativity scene or nativity scene in houses with figures that represent the birth of the Child Jesus in a manger.

The difference with other countries like Spain is that in many Mexican homes the birth is not saved shortly after the arrival of the Three Wise Men (on January 6), but on February 2.

Many children receive gifts on the eve of Twelfth Night, January 5, from the Reyes Magos, the Three Kings who pass through on their way to Bethlehem. Children leave their shoes on the windowsill and find them filled with gifts the next morning.

At a special Twelfth Night supper on January 6, families and friends enjoy hot chocolate flavored with vanilla and cinnamon, and a ring-shaped cake – roscon.

Whoever gets the slice of cake containing a tiny figure of a baby will give a tamale party on February 2, Candlemas Day.

The surprise of Roscón de Reyes

If you are surprised at the roscón de Reyes, you will be the host on February 2.

On February 2, the Fiesta de la Candelaria (“Candlemas Festival“) is celebrated and it is customary in Mexico for the same people to gather together on Three Kings Day.

Where? Well, in the house of the person who was surprised (a porcelain or plastic figure) in the traditional roscón de Reyes.

The whole family helps to prepare the tamales, which are a meat or chicken filling wrapped in corn dough. The tamale is then wrapped in corn husks and steamed. A religious service held on Candlemas marks the end of the Christmas season in Mexico.

On New Year’s Eve have your suitcase handy

The end of the year celebrations in Mexico is also traditional to dine with the family (although not necessarily at home) and have the 12 grapes, but some superstitions do change.

For example, in Mexico, there are many people who, at the turn of the year, take a suitcase and move around the house to, according to popular belief, travel like this a lot in the new year. And that, whether you believe that superstition or not, it is a great New Year’s wish.

There are various regional Christmas season traditions in Mexico:

In Alvarado and Tlacotalpan, there is the Fiesta Negrohispana, which is a celebration of African identity in Mexico which runs from December 16 to the 24th.

In Oaxaca, a major event is the feast day of the patroness of the state, the Virgin of Solitude, on December 18. She is honored with precessions called calendas, with allegorical floats and costumes.

The traditional food for this is called buñuelos, a fried pastry covered in sugar. In coastal areas, her image is often brought to shore by boat, accompanied by other boats with brass bands.

Also in the city of Oaxaca, on December 23, there is a unique event called La Noche de Los Rabanos (Night of the Radishes).

Oversized radishes are carved into elaborate figures. Originally, these were for nativity scenes but today there is a major competition in which the vegetables are carved in all kinds of figures.

In the Xochimilco borough of Mexico City, January 6 is important as the day that the best known Child Jesus image, the Niñopa, changes “hosts” or the family that will take care of the over 400-year-old image for the year.

In the Nativitas section of the borough, there is a parade of the Wise Men, sometimes with real camels.