INAH has been closing monuments to public 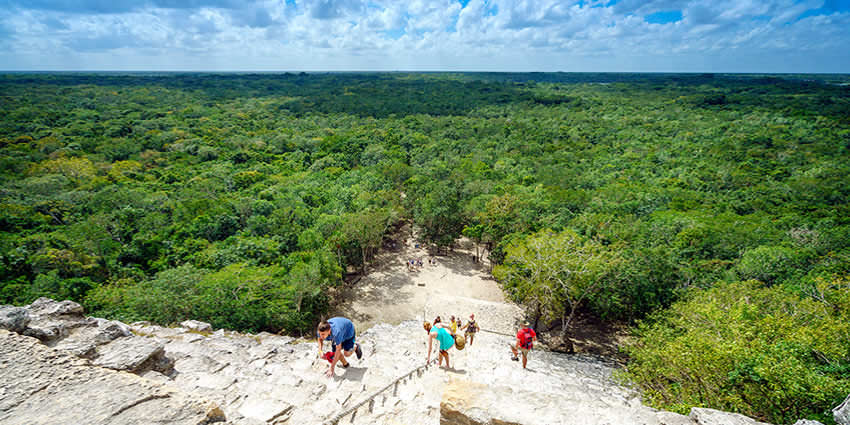 The Maya pyramids were built to be climbed. They usually have steep stairways rising to the top, where there is often a temple or, at least, an altar. The views over the rest of the ruins and the jungle were enough to reduce grown men to tears of wonder.

Millions of people, in the past, have made the pilgrimage up them.

From the top of ancient pyramids, the jungle looks like a living green carpet.

Advice abounds on how to survive the arduous ascent – don’t look down until you reach the summit.

Sip water frequently, and try not to do it in the midst of a massive group – and even more advice for the sheerness of the descent – hold onto the guide rope; come down on your backside, bumping from step to step; do it like a crab, sideways.

In recent years, the National Institute of Anthropology and History (INAH), which manages the archaeological site of Chichen Itza, has been closing monuments to the public. While visitors can walk around them, they can no longer climb them or go inside their chambers.

Yet, increasingly, the great pyramids are being roped off. You can no longer climb the mighty El Castillo at Chichén Itzá; but, at Cobá, it is still possible to make your way up the tallest pyramid in the Yucatán peninsula – Nohoch Mul.

Within two or three years, it is likely that no Maya pyramid will be available for the public to climb.

This really is a call out that, if you wish to experience this, then you will have to visit the remaining sites now. They are Cobá, Dzibilchaltún, Ek’ Balam, El Meco, El Rey, Itzamal, and still maybe Uxmal. The other sites have already banned climbing on their buildings.

Climbing these pyramids, especially El Castillo, usually turns up on ‘things you should do before you die’ lists.

With this in mind, disappointed tourists often demand to know why they can’t climb on them. Unfortunately, the issues have arisen from the sheer number of tourists that wanted to experience the climb and the views.

Over a million people, annually, climbed the sides of El Castillo. Within a decade, the effect was obvious.

Tourists, triumphant in reaching the Cobá summit, had left their mark in the form of graffiti. The stone steps, which had survived centuries, were already showing signs of rapid erosion. Letting people up there was severely damaging the pyramid itself.

The climb was already steep, but the crowds rendered the steps shiny with wear. It was hot work getting up there, so sweat poured off them onto the stone, adding another slippery layer.

As more and more people flooded into the site, the ascent was generally made with huge groups of people clambering up together, knocking into each other. In short, it was becoming way too dangerous for those attempting the climb.

For a while, the owners of these sites, not wishing to deny the experience of the climb to their visitors, opted for damage limitation.

An ambulance was on permanent standby at the foot of El Castillo (aka Castillo de Kukulcan). It was used more often than anyone would like, as tourists slipped and fell. Most injuries were fairly minor, but there was an alarming number that was a little more serious.

Then came a tragic event that was a lot more serious.

Once there, Mrs. Black did not want to miss out on the experience of a lifetime, so she climbed the 91 steps of El Castillo.

All was well on the way up, but the descent is famously difficult. It was also noon, so the temperature was soaring, even for January. Around the 46th step, 18 meters above the ground, Mrs. Black slipped. She tried but failed, to grab the guide rope.

In front of a crowd of horrified, helpless staff and tourists, Mrs. Black fell down the remaining steps of the pyramid.

Medical assistance was immediate. The ambulance, permanently stationed at the foot of El Castillo, was mobilized. Its crew administered aid at the scene, then rushed her to the nearby Regional de Valladolid Hospital. Unfortunately, the lady’s head and neck injuries were too severe.

Despite the best efforts of the hospital personnel there, Mrs. Black died four hours later.

For the owners of Chichén Itzá, this was the last straw.

They had bowed to public pressure to keep the structures accessible to climbers for too long. An army of specialists had scrubbed or otherwise erased the graffiti; repairs had been made to eroded steps; guide ropes had been fitted, and the ambulance installed.

But there were now simply too many people wishing to climb the pyramids.

What had occurred with Mrs. Black had been an accident waiting to happen, and now it had actually happened. The decision was made, for the safety of visitors and the preservation of the structures, to prohibit public climbing on the pyramids.

Meanwhile, other archaeological sites took note. Some places, like Tulúm, had also been suffering from graffiti and erosion, but they didn’t wait for a similar tragedy to occur within their premises.

As soon as the news spread about Mrs. Black’s fall, the owners of several sites started to rope off their tallest, steepest structures too. The more squat buildings are still accessible on all of the sites.

Other places were lesser-known, so didn’t get the same quantities of tourists. There had been little or no damage caused there by the crowds.

Their steps might be steep, but they weren’t worn by millions of feet, nor covered in the perspiration of dozens of tourists per minute clambering up them. They decided to risk leaving access open, until such time as that situation changed.

However, this meant that more and more visitors arrived, en route from one of the larger sites, now wishing to climb a pyramid. As the popularity of the smaller sites grew, then more of them started roping off their structures too.

For some, this is an absolute travesty and it’s ruined their vacation blah blah. For others, this is actually better. In previous years, the structures could barely be seen under the press of bodies climbing all over them. Now they are there in all their glory.

It’s not like these buildings are small. The rope is very long and there are whole courtyards to stand in and marvel at the architecture.

These are huge pyramids, for which even toddlers in pushchairs could find a decent viewpoint.

Now the magnificent buildings look more like they did in the books and pictures back home, which had enticed visitors here in the first place. It was only ever a percentage of people who actually climbed them.

The more intrepid adventurers would often start their ascent leaving behind the rest of their party, Chichén Itzá who would watch from the ground level.

Some tourists have whispered that the roping off is much better because they no longer have to wait in the heat, with all the bags, while their teenagers disappear off up the steps. Selfish, maybe, but much more enjoyable for all.

There is still plenty to see and do at places like Chichén Itzá and Tulúm. They are still world-class heritage sites, with stunning vistas and a sense of the mysterious. They are just a whole lot safer now for their visitors.

Just over a year after some buildings were roped off, Chichén Itzá was named one of the New Seven Wonders of the World.

There are a few times in life when you approach something so amazing that it literally takes your breath away. This is a kind of thing you’ve seen online and in books and even on TV, but that you never imagined you’d see up close.

For those who, despite all of this, still wish to experience that climb, then Cobá, alongside the smaller sites of Dzibilchaltún, Ek’ Balam, El Meco, El Rey, Itzamal, and Uxmal, are waiting for you. However, please do hurry.

There’s no telling how long those pyramids will remain accessible for the climb. The only certainty is that they too will eventually be forced to rope off their structures, in order to maintain the safety of their visitors.