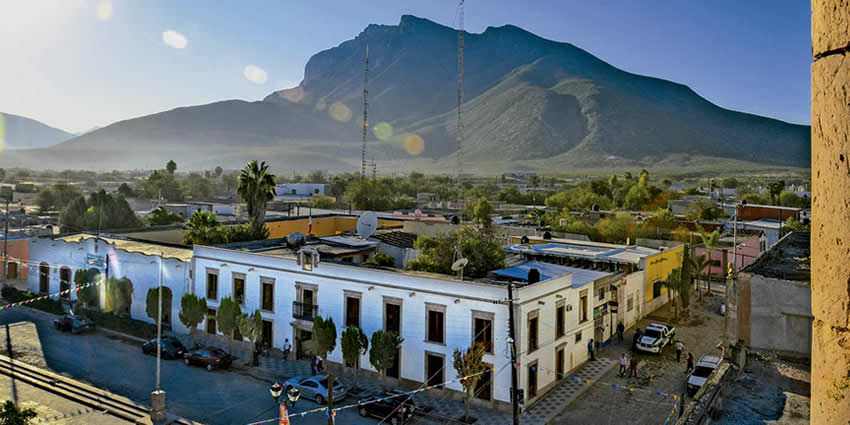 Mapimí is a city and municipal seat of the municipality of Mapimí in the Mexican state of Durango.
As of 2010, the town of Mapimí had a population of 5,623.

The Ojuela Mine, about 3 km. southeast of Mapimí, is a famous locality for mineral specimens, especially adamite.

Mapimi is an outstanding “Magical Town”, given its fierce history and location in the middle of an inhospitable desert. Be surprised with every step you take; listen to the wood of the Ojuela hanging bridge as it creaks under your feet and the wind as it howls through the hundred meter deep gorge and whispers the secrets of the people and the mining center into your ear while looking at the verdant mountains that complete this imposing structure.

Step into the Rosario Caves and discover the Bolson Biosphere Reserve; a surprising natural area recognized by UNESCO (in the Man and Biosphere program), which is home to many different endemic species (some of them endangered) such as the bolson tortoise, pale hawk and bura deer.

Feel the enigmatic mystery that surrounds the Zone of Silence; the desert and dune sands will cause your eyes will marvel at the marine fossils, cacti in violet tones and stones that locals say are actually meteorites that bring with them the history of the universe.

The indigenous Tepehuan Indians called this place “the rock on the hill” and repeatedly thwarted the attempts of Jesuit missionaries to found a town here, but the thirst for gold won in the end.

It is rumored that gold was even found under the town’s streets. A small museum houses mementos and photos from the old days showing just how prosperous this mining town once was.

One handbook to gem collecting in Mexico describes Mapimí as the “mineral collector’s capital of Mexico”. This is the place for the geologist in the group to find plenty of inexpensive agates, selenite crystals, calcite and other minerals.

Like seemingly every town in this region of Mexico, Mapimí boasts that both Miguel Hidalgo, the Father of Mexican Independence, and Benito Juárez, the President of Indian blood, passed by in the nineteenth century. Juárez even stayed overnight.

Access to one of the local mining areas, about 10 km outside the town is via the Ojuela suspension bridge, a masterpiece of engineering. Ruined stone houses on the hillsides tell of Ojuela’s former wealth.

Ore was first discovered here in 1598. By 1777, seven haciendas de beneficio (enrichment plants) served thirteen different mines. In 1848, the Spanish mine owners gave up their struggle to make the mines pay and a Mexican company took over.

In 1892 they decided to attack the hillside opposite Ojuela. To shortcut the approach, engineer Santiago Minguin spanned the gorge with a 315-meter-long suspension bridge, said by some to be the third longest in Latin America.

The mine’s production peaked just after the Mexican Revolution. Between 1922 and 1925, 687 kilograms of gold and 99,820 kilos of silver were extracted, alongside more than 51 million kilos of lead and a million kilos of copper. At that time, some 3000 miners celebrated every evening in the bars of Ojuela, now completely abandoned to the elements.

The bridge, restored for its centenary, is a worthy contribution to tourism in Durango state. One and a half meters wide, it sways and bounces in the breeze, probably scaring mums and dads into silent concentration faster than their excited children! But the local miners and their mineral-laden donkeys rattle across the planks as if it were a highway. Once across the bridge, old timers will take you on a one kilometer walk along mine galleries (unlit except for hand-held miners’ lamps) which completely traverse the mountain to emerge into daylight on the far side.

Not far from Mapimí is the internationally-famous “Zone of Silence”, the Mapimí Biosphere Reserve, the claimed merits of which are much discussed.

The Mapimí Silent Zone (La Zona del Silencio) is the popular name for a desert patch near the Bolsón de Mapimí in Durango, Mexico, overlapping the Mapimí Biosphere Reserve. It is the subject of an urban myth that claims it is an area where radio signals and any type of communications cannot be received.

However, communications equipment tends to work properly in the zone. Guides assert that the zone moves around; as a result locals are highly skeptical of the zone’s existence.

In July 1970, an Athena test missile launched from a U.S. military base near Green River, Utah toward White Sands Missile Range lost control and fell in the Mapimí Desert region. The rocket was carrying two small containers of cobalt 57, a radioactive element commonly associated with the construction of Salted bombs.

After several weeks of searching, local farmers found and reported the crash in the Northeast corner of the State of Durango. Once the rocket was found, a road was built to transport the wreckage, along with a small amount of contaminated top soil.

As a result of the US Air Force recovery operations there, a number of myths and stories relating to the area arose, including “strange magnetic anomalies that prevent radio transmission”, mutations of flora and fauna, and extraterrestrial visitations.