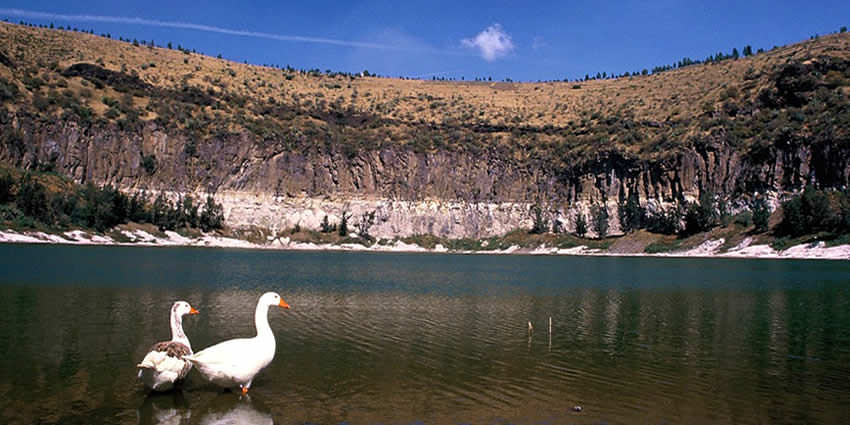 “Siete Luminarias” (“Seven Luminaires”) is a set of seven inactive volcanic craters located in the northwest and southwest of the Santiago Valley.

The name of “Siete Luminarias” comes from an imagined time when the seven volcanoes were active at once in prehistory. All seven extinct volcanoes are distributed in an area of ​​90 square km.

The Valley of the Seven Luminaires is a place full of mysteries. This area is famous for its theories and legends about giant vegetables, UFO sightings, stories and amazing phenomena.

The stories go from a supposed “cousin of Nessy”, called Chac which lives in the underground tunnels that connect the craters, even sightings of UFOs, enormous size of vegetables and fruits or the fact that, according to the mexican astro-archaeologist Guadalupe Rivera de Iturbe, the luminaires are aligned with the constellation Ursa Major.

In the interior of most of the craters there are small lakes that the inhabitants of this region call “hoyos” (“holes”).

Alberca is located within the urban area of ​​Valle de Santiago, with a crater rim 750 meters in diameter.
La Alberca (The Pool) is a crater lake with is open to the public for swimming, rowing or boating.

Located in the heart of this fascinating topography it has an infinity of caves and in the interior of many of them there are enigmatic and mysterious rock paintings and other evidences that people once lived in these craters.

There are orchards of fruit trees like the orange tree, and abundant vegetation of absinthe and estafiate. Archaeological remains have been found here. Currently it is used as a growing area.

La Hoya de Flores, where there are remains of a pre-Hispanic ceremonial center, caves with cave paintings and springs that spring from the rocks. It is the largest of the craters. In its interior there are thermal waters and its fertile lands have produced great harvests. The first giant vegetables were given here.

Rincón de Parangueo, with alkaline waters, which can be reached through a tunnel, 500 meters long, excavated in the rock. Inside there is a lake with calm waters. You can also find countless caves that have hardly been explored. There are petroglyphs in some of them.

No all luminaries have water. The Alvárez and de Solís pits are dry-bedded and have been used since ancient times for agricultural purposes. The one of Alvárez is considered a privileged point of observation of the night sky, by its high edges.

Finally, in the Hoya de San Nicolás, there are records that its waters change color, as it does with the crater of the neighboring city of Yuriria.

Seen from above, Valle de Santiago presents a panorama that could belong to a lunar landscape full of craters, so that when you fly over the area, it is difficult to resist the temptation to evoke space mysteries. Maybe I miss this landscape, be the cause of so many stories related to aliens.

Perhaps the most unfathomable mystery that this Valley of the Seven Luminaries has is its giant fruits and vegetables.. Lettuce with a diameter of 90 centimeters, onions and radishes weighing 15 kilograms.. Two-meter chard.. How is that possible?

The locals talk about magical formulas, traditionally passed down from generation to generation since the pre-Columbian era.. Based on the positions of the stars, astrology.. All this creates the ideal circumstances to make these vegetables grow so disproportionately.

In 1977 the government decided to investigate that miraculous growth by establishing a “competition” between scientists and peasants.. Ones with their technology, others with their old knowledge. The result: the scientist’s harvest weighed 8 tons and the harvest of the peasants weighted 1000.. one hundred tons!

Google map of the town Valley of Santiago

Transportation and How to get there

State of GuanajuatoValley of Siete Luminarias