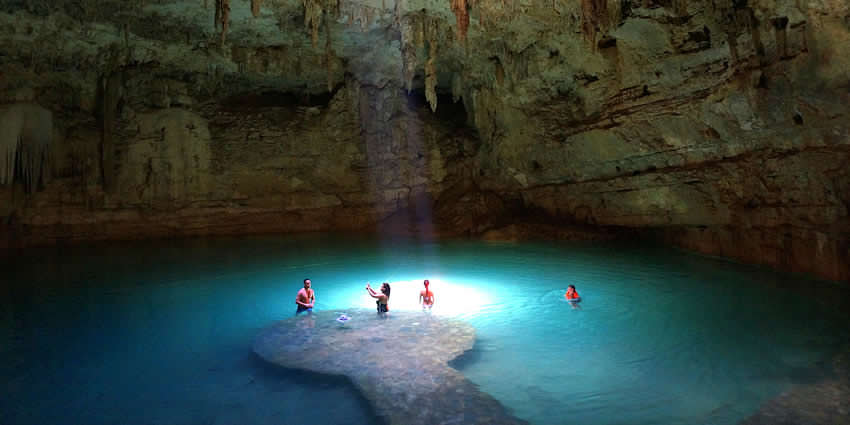 Grottoes of Balancanche (Grutas de Balancanché) are the most famous Maya cave sites, near Chichen Itza, in Mexico.

Approximately 4 km southeast of the Chichen Itza archaeological zone is a network of sacred caves known as Gruta de Balankanche.

Balankanche caves are one of the Mayan world’s most impressive Maya Ceremonial caves and underground waterways. Here ancient Maya World Initiation and Ceremonial Rites were celebrated by the Mayan Senior Wiseman or Aj Men J-Men.

Balankanche is easy to explore and visitors can see Mayan offerings vessels still in place within the main Mayan cave dome and ceremonial site.

For the past 22 years, the cave has been used as a tourist attraction.
In the caves, a large selection of ancient pottery and idols may be seen still in the positions where they were left in pre-Columbian times.

The name translates to “the cave of the sacred jaguar throne”.

According to another version, the name of the cave is related to the Mayan leaders, not the animal jaguar.

Balancanché was known to the Mayans as early as the pre-classical period, 3,000 years ago. The cave was a source of water and because of this, was the object of worship to the god of rain, Chaac.

For the first time in modern times, Balancanché was visited by Edward Thompson and Alfred Tozzer in 1905.

Edwin Shook and R.E. Smith explored the cave on behalf of the Carnegie Institution in 1954 and dug several trenches to recover potsherds and other artifacts. Shook determined that the cave had been inhabited over a long period, at least from the Preclassic to the post-conquest era.

On 15 September 1959, José Humberto Gómez, a local guide, discovered a false wall in the cave.

Behind it was a Maya sanctuary consisting of the “Altar of the Jaguar” and the “Altar of Pristine Waters”. He found an extended network of caves with significant quantities of undisturbed archaeological remains, including pottery and stone-carved censers, stone implements, and jewelry.

The cave ended at a small lake. The sanctuary has been studied and described by Ramon Pavon Abreu. It turned out that the sanctuary was built in honor of the god Tlaloc, and walled in about 842 AD during the Classic Maya collapse.

INAH converted the cave into an underground museum, and the objects after being cataloged were returned to their original place so visitors can see them in situ.

From Valladolid by bus, “colectivo” or local agency tour.
Getting there in a taxi from Valladolid will cost $7-$9 and will take around 0:45 min.

Grottoes of Balancanche on Google Maps