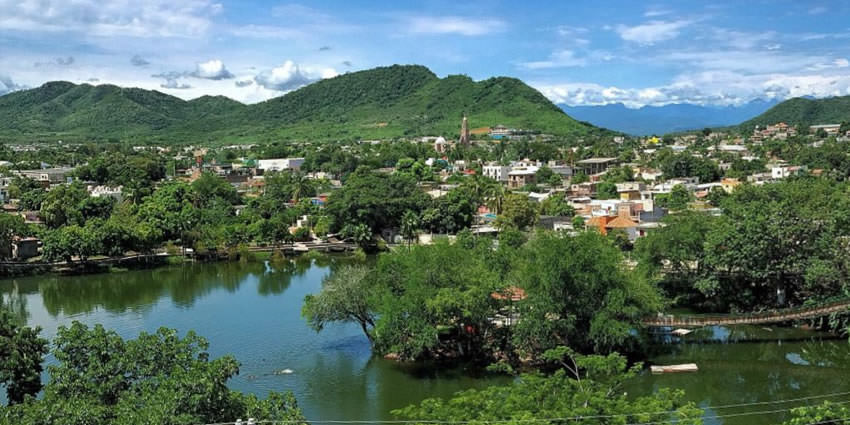 El Rosario is a town and its surrounding municipality in the Mexican state of Sinaloa. The town has been granted the category of “Pueblo Señorial” while in fact, it’s a small city or municipality, and is ordered by the Baluarte River.

The town of El Rosario is located about 50 km south of Mazatlan and boasts natural landscapes, including Iguanero, a green lagoon surrounded by lush vegetation.

El Rosario is an attractive tourist spot with vestiges of the glorious epoch of a historic town. El Rosario is rich with historical relevance in its ancient missions and colonial manor houses with colorfully-tiled garden patios and lavish interiors.

El Rosario’s patron saint, the Rosary Virgin, has traditionally been celebrated every first Sunday of October in this town, which has received the honor of becoming a Pueblo Mágico.

Nowadays, El Rosario is included as a tourist site in most travel brochures.

El Rosario was founded on August 3, 1655, with its name deriving from Bonifacio Rojas, who discovered melted silver in the morning residue of his previous night’s campfire.

Marked by a rosary, gold and silver mining began at the site of his discovery, and with it the flourishing of this picturesque town.

The area now by the town of El Rosario was once inhabited by three ethnic groups, the Totorames, Xiximes, and Acaxes.

The Totorames inhabited the region including the valley and the coast of Rio Piaxtla (Piaxtla River) to Rio De Las Cañas (Las Cañas River). The favored site, Chiametlan, is today the town of Chametla.

These three ethnic groups are strongly identified with fishing, pottery, and agriculture.

It is said that on August 3, 1655, a corporal named Bonifacio was looking for missing cattle. He walked along a river in what is now known as Loma de Santiago, from where the cattle were lost. He went for it and captured it.

As it had turned to night he lit a fire. When he woke up he was in for a major surprise, under the ashes of the fire he saw large molten silver adhered to a rock.

He then gave the news to his boss. But before he left to give the news he left a Rosario to mark the place. His boss ran to the location to confirm that it was silver and began to extract the silver.

In the 1800s Mazatlán became the port of entry for all minerals produced by El Rosario, Copala, and Pánuco, Rosario was then the most important of these three prominent mineral centers due to the large amounts of silver and gold it produced.

El Rosario is one of the most faithfully-preserved mission towns in the region. The town’s crowning structure is its majestic cathedral, whose interior features a uniquely-crafted altarpiece bathed in gold.

Among its attractions is the church of Nuestra Señora de El Rosario, a baroque temple with a gold-plated altar design and style dating from the 17th Century, and the Santa Cruz Chapel, which dates from the 19th Century.

El Rosario is famous for the altar in the town church. The altar alone makes a visit to El Rosario somewhat worth the drive.

El Rosario was once the richest town in Northwest Mexico because of its local mining operations.

This small town was the home of the famous Mexican singer, Lola Beltrán. They have built a small museum in her honor although the museum is open only sporadically.

Among other must-sees in El Rosario and contiguous areas are the mausoleum, the Hacienda of Cocoyotl en Agua Verde, the Octagonal Spanish Cemetery, and the virgin beach at El Caimanero.

El Rosario’s bridge is pretty tiny, close to the water, and sits over a placid pond versus an active river.

You can fully take in the beauty around you: the verdant foliage along the water’s perimeter, the locals taking a midday break, and the calming quiet that envelops you. The view is reminiscent of a Japanese garden.

The bridge ostensibly exists to provide access to a tiny island at one end, but given that there’s basically nothing on it, it’s apparent that this is here primarily for beauty’s sake.