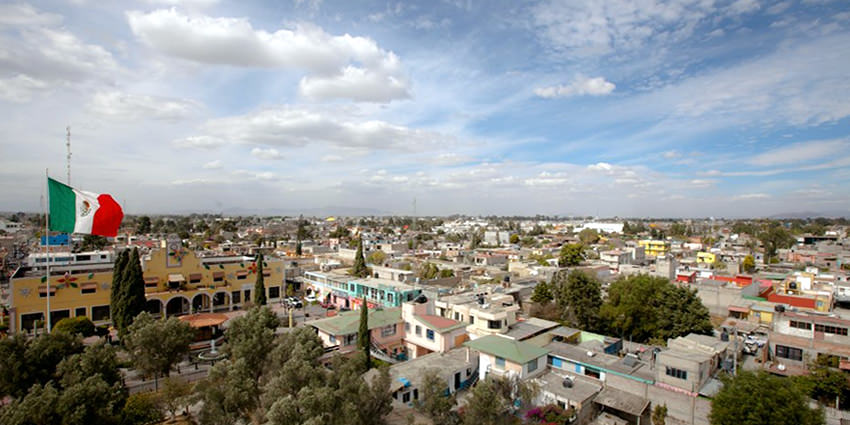 It is located in the eastern part of the state, just east of Chimalhuacán and northeast of the Federal District (Distrito Federal), within the Greater Mexico City urban area.

The word “chichicuilote” also means a species of bird that was part of the fauna of the lake of Texcoco.

It is also derives from the word “chicoaloapa”, which translates as “in where there are chichicuilotes”.

Over the years the inhabitants of the area have identified it with the name of Chicoloapan.

Derived from the meaning of the words in Nahuatl, the name has two asceptions:

1. Referring to the birds that were found in the lake of Texcoco, called chichicuilotes, from which it is deduced that Chicoloapan means “Water in which there are Chichicuilotes”.
2. “The place where the water twists or diverts its course”.

The “Juárez” was added in name of Benito Juárez.

Chicoloapan was one of the first towns in the Anahuac until the Classic period when it became sedentary. Founded by the Acolhuas (Chichimecas) around 1149 BC, the first language spoken by its inhabitants was Chichimeca and then Nahuatl.

He had an influence of the Teotihuacan, Toltec and Mexica cultures. It was under the control of the Acolhua Chichimeca culture for nearly 300 years, based in the town of Coatlinchán, whose first governor was Apaxli Chichimecatl, descendants who ruled for 200 years. At that time Chicoloapan was divided into three towns.

Before the arrival of Hernán Cortés, Chicoloapan was in conflicts due to his government, reason why its inhabitants were united to the Spanish troops like cavalry, with white horses.

Prior to its constitution as a municipality, Chicoloapan was based in Cuautlalpan.

During the Colony, evangelization was in charge of Franciscans, Dominicans and Jesuits. The latter gave the name of San Vicente to the town, which precedes that of Chicoloapan.

On July 16, 1822, before signing the constituent act of the sovereignty of the State of Mexico, Chicoloapan is recognized as a municipality, but it is only as of decree number 36 of February 9, 1825, that San Vicente Chicoloapan becomes in a free municipality.

In 1855 he is appointed as the first municipal president of Chicoloapan, Mr. José Arcadio Sánchez.

The documents and studies carried out in the municipality reveal important data:

Lithic remains (stone utensils) have been found approximately 15,000 years old.
A skull of more than 13,000 years ago, belonging to a child, was discovered, which can be seen in the National Museum of Anthropology and History of Mexico City.
The town of origin of this municipality was founded in 1149 a.C., by Apaztli Chichimécatl, descendant of the lords of Coatlinchán.
There is an archaeological zone not yet explored, but looted and destroyed in part, located in what is known as the Cerro del Portezuelo.
It has a Catholic temple built in the seventeenth century.

1521 – Chicoloapan becomes part of the Encomienda de Hernán.
1788 – The Parish of “San Vicente Mártir” is inaugurated.
1822 – On July 16 it is declared a free municipality.
1885 – The municipality is named “Villa de Chicoloapan de Juárez”.
1923 – Beginning of distribution of ejidal lands in the municipality.
1952 – Discovery of human fossil remains dating back more than 13,000 years.
1968 – Chicoloapan participates in the athletic race with the torch in the direction of the archaeological site of Teotihuacán. Inauguration of the 1968 Olympics in Mexico.
1968 – Inauguration of the first high school in Chicoloapan.