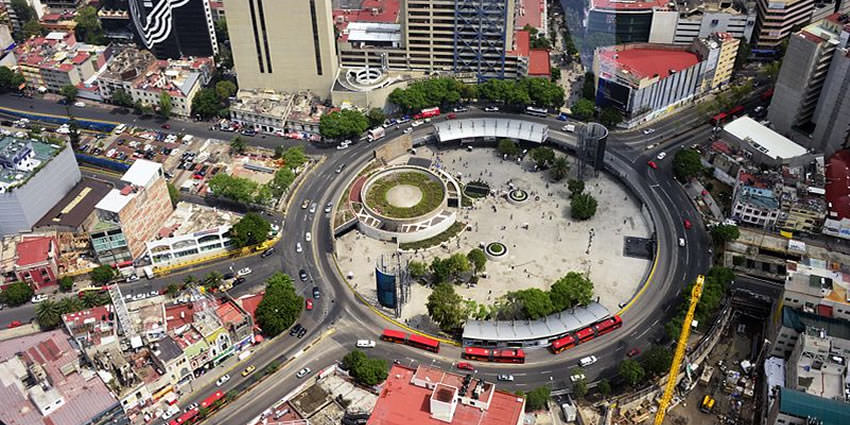 In it flow both Oaxaca Avenue and the streets of Jalapa and Genoa, which give access to Colonia Roma Norte for the first and the Zona Rosa of the Colonia Juarez for the latter.

Glorieta de Insurgentes consists of the vehicular pass of the avenue that gives it its name, the pedestrian center surrounded by shops under it, and its access to the Metrobus Insurgentes station and the Insurgentes Metro station.

Still further down the Metro is the overpass of Avenida Chapultepec. Pedestrians, Metrobus, Metro, cars, and heavy transport all converge here.

On one side of the Glorieta de Insurgentes is the Zona Rosa, which is one of the most important tourist, commercial and financial places in Mexico City. It is recognized as the area with the most restaurants and nightclubs aimed at the gay population of the city.

To the south of the Glorieta de Insurgentes, in the Colonia Roma Norte, there is a replica of the Fuente de Cibeles.

The Public Security Secretariat of the Federal District and several schools, cinemas, hospitals, and places are located around the Glorieta de Insurgentes.

La Glorieta de Insurgentes was remodeled in 2012 with the installation of advertising nodes and the organization of scattered advertising. It is intended to emulate public spaces known by the order of their ads such as Times Square, Shibuya, or Piccadilly Circus.

How to get to the Glorieta de Los Insurgentes