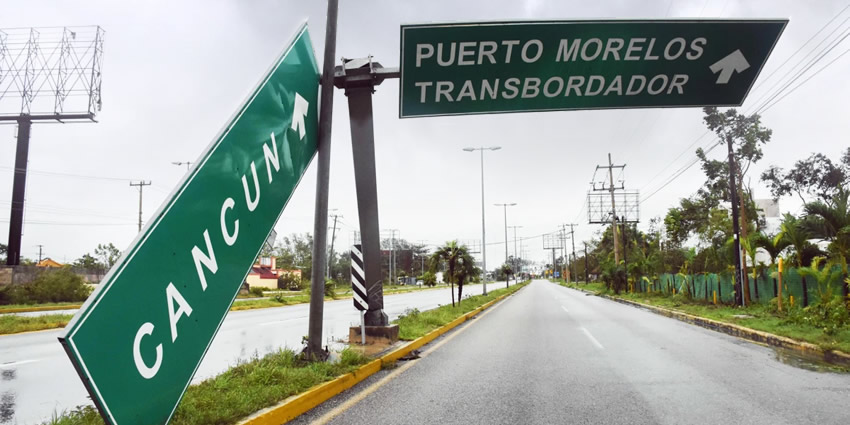 The Cancun hurricane season is the same as the Atlantic season. It lasts from the beginning of June to the end of October. The highest chance of a hurricane occurring is in September and October with a slightly lower chance in August.

What happens in Cancun when a hurricane is predicted?

This really depends on both the strength of the hurricane and its predicted path.

A minor hurricane that brushes by may mean little to no difference in daily operations. However, aquatic-based tours will usually be canceled as a precaution. There may also be disruption to ferry services to Isla Mujeres.

A minor hurricane direct strike and a major hurricane non-direct strike will mean that precautions are significantly increased. Local businesses and residents will begin boarding up their homes. There may also be panic buying of goods at supermarkets.

Hotels will also board up their facilities and may issue instructions to guests in the event of an evacuation. Alcohol service may be stopped. Usually, evacuation happens only in the most serious of cases.

This has happened only once in the last 15 years, for Hurricane Wilma in October 2015.

Although rare this is not to be ruled out. If evacuated from your hotel you’ll most likely be taken to a local school in downtown Cancun. You’ll be looked after by hotel staff until any danger is over.

Although sleeping facilities will be provided they will likely be basic. Grab some bedding and pillows from your hotel! In the case of Hurricane Wilma in 2005 people stayed in emergency accommodation at a local school for 4 days.

A direct strike from a major hurricane will cause extensive damage. There will be floods and power outages for an extended period. Airport and public transport services will likely not be operational for some time.

The best thing to do is to hold tight and comply with instructions from officials. It will be uncomfortable, but you will not be in personal danger. Your chances of being affected really are slim, but not impossible.

You should be wary of traveling during the months of Cancun hurricane season, but don’t be unduly scared. Severe hurricanes really are a rare event, with only two major ones happening in the last 40 years.

There have been two major hurricane events in Cancun’s tourism history of 40 years or so:

Hurricanes don’t hit Cancun every year, far from it. There are also occasions where near misses have taken place and resulted in a lot of worries. However, they usually bring no major damage or disruption.

In August 2007 Cancun had a lucky near miss. Hurricane Dean looked dead set to strike Cancun with a ferocity similar to that of Wilma. Luckily, 48 hours beforehand, Dean changed course and ended up making landfall some 200 miles south.

Although major preparations had been made in Cancun, the worse that happened was 48 km/h winds gusting to 80 km/h on the coast. Also, some heavy rain showers lasted just a few hours.

The following day things were back to normal and there was a little trace that Hurricane Dean had grazed.

In August 2008 the hurricane Gustav came close but in the end, this one also turned out to be a lot of fuss about nothing.

Hurricanes really are not common, every year it seems the National Hurricane Center predicts a busy hurricane season. More often than not that hasn’t materialized in Cancun.

It’s important to note that Tropical Storms don’t always develop into hurricanes. In fact, they usually don’t. Even if a storm does develop into a hurricane there is only a small chance that Cancun will be directly affected.

On 21 and 22 October, 2005 Hurricane Wilma made a direct strike on Cancun causing severe damage. Hurricane Wilma is the most powerful hurricane ever recorded. She completely destroyed the Cancun tourist industry for a good 6 months.

Many hotels were damaged, some beyond repair. Shops, bars, and restaurants suffered flooding and structural damage. Downtown infrastructure was badly damaged, with many power lines down.

Most residents were without electricity and/or water, many for over a week.

There were no smartphones or Facebook back in 2005, it was very difficult to find out the news.

The immediate clean-up effort was truly something to behold. Instead of waiting for the authorities to pick up the pieces every man, woman and child were out helping.

They were clearing fallen debris, unblocking drains, and repairing what they could. Additionally, they provided support and comfort, not only to each other but to the thousands of tourists ‘trapped’ in Cancun due to the closure of Cancun Airport.

This was a huge storm by anyone’s measure and the efforts of the people of Cancun were truly remarkable.

The resilience and determination of the Mexican people together with unprecedented support from the Mexican Government ensured that Cancun came back better than ever.

A massive beach recovery program took place restoring the beaches to a condition better than before Wilma hit.

Unfortunately, this wasn’t too successful and most of the sand washed away again within a year. The exercise was then repeated in 2010 and this time the sand stayed!

Hoteliers and restaurateurs turned the downtime opportunity to their advantage and brought forward longer-term plans to upgrade and improve facilities resulting in today’s Cancun being way improved on the Cancun of 2005.