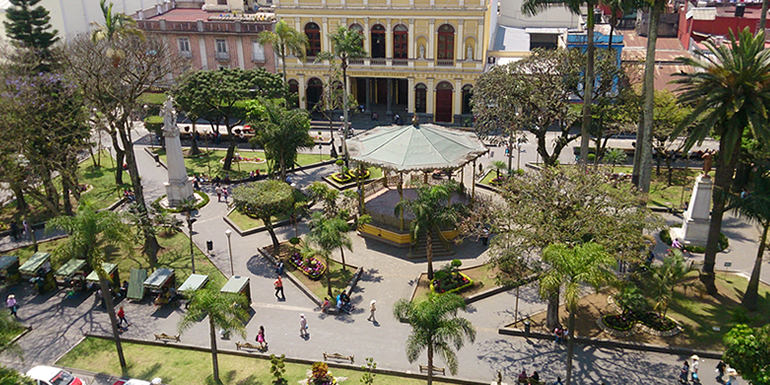 Orizaba is a city and municipality in the Mexican state of Veracruz. It is located 20 km west of its sister city Córdoba, and is adjacent to Río Blanco and Ixtaczoquitlán, on Federal Highways 180 and 190.

The city had a 2005 census population of 117,273 and is almost coextensive with its small municipality, with only a few small areas outside the city.

Orizaba has an important industrial life. There is, for example, the Cervecería Cuauhtémoc Moctezuma company (a brewery), which was established in 1896 in Orizaba.

The town lies at 1,200 m. (4000 ft.), at the confluence of the Río Blanco with several tributaries, including the Río Orizaba, near the mouth of a large valley heading westward into the eastern Sierra Madre Oriental. This location, at the bottom of the ascent into the mountains, is an important transition point along what has been for centuries the main trade route between Mexico City and Veracruz on the Gulf Coast.

The climate is generally pleasant, though often cloudy and rainy, and the soil of the Orizaba valley is extraordinarily fertile.

Overlooking the valley from the north is the Pico de Orizaba (Citlaltépetl), a volcano that, at 5,636 m. (18,490 ft.), is the highest mountain in Mexico and third highest in North America.

In the town of Ixhuatlancillo north of Orizaba, and in a large mountainous area to the south (the Sierra de Zongolica), live many thousands of people who speak a variant of Nahuatl which is often called Orizaba Nahuatl.

It is generally understood that the name Orizaba comes from a Hispanicized pronunciation of the Nahuatl name Ahuilizapan [āwil-lis-ā-pan], which means “valley of happy waters”.

Another possibility, however, is the word Harish (Jerez de la Frontera, Andalusia, in 16th-century Spanish pronunciation), this place being the hometown of the first Spanish settlers (1521) of Orizaba.

Harish or—in a simplified form—Ariz, with the addition (under the influence of the Arabic language) of the gentilic “i” and/or with the ending “aba”, meaning fortification, would have become Ariziba or Arizaba, from which Orizaba would have derived.

The word Harish—in turn—is, according to some authors, linked to the capital of Tartessus and could refer to the biblical Tarshish. Its Semitic meaning could be “trading post” or “fundry site”, since Tartessus was a major Phoenician center of tin commerce and bronze production.

Orizaba was already an important town at the time of the Spanish conquest, and it was in Orizaba that La Malinche, Hernán Cortés’s interpreter and mistress, was married to the Spanish gentleman Juan Jaramillo.

A plaque at the Temple of “The Immaculate Conception” in Huiloapan commemorates this event.

During the colonial period, Orizaba became an important city. On January 27, 1774, the Spanish king Carlos III conceded town status (villa) to Orizaba, and on November 29, 1830 Orizaba was declared a city.

In October 1812, José María Morelos captured the city for the insurgent army. In 1821 to the end of the war, Agustín de Iturbide was in Orizaba before and after the signature of the Agreements of Córdoba in the neighbor city.

When Lucas Alamán established, in 1836, the first textile factory (Cocolapan factory) of Orizaba, the city started its economic life as an industrial city.

In 1839 the newspaper La Luz was created and the Veracruz by the governor Francisco Hernández y Hernández gave the name of Veracruz-Llave (remembering the General Ignacio de la Llave, who was born in Orizaba) to this state of Mexico.

On May 8, 1874, Orizaba was declared the capital city of Veracruz by the governor Apolinar Castillo, but in 1878 the status was transferred to Xalapa.

During the government of Porfirio Díaz, Orizaba was declared the most educated city in the Mexican province.

In the late years of Porfirio Díaz’ Government, two important workers’ strikes occurred, those of Cananea and Río Blanco, the latter taking place in Orizaba and being an important prelude to the Mexican Revolution.

The American World War I and World War II transport ship USS Orizaba (ID-1536) was named after this town.

The old City Hall El Palacio de Hierro (The Iron Palace) in the centre of the city was designed by Gustave Eiffel. Built with 600 tons of Belgian steel, its parts were shipped from Belgium during the Porfiriato (the government of Porfirio Díaz), to be assembled in Orizaba.

The palace cost 100,000 pesos (gold) a very large sum at the time,considering 1 peso gold was 3 dollars at the time. It was Don Manuel Carrillo Tablas who not only loaned the money to the city, but also had to pay the additional cost of unloading the palace from the port and having it reassembled at its present location, the Plaza de Armas.

Unfortunately, Don Manuel Carrillo Tablas died New Year’s Eve of 1899 without ever having received a cent from the city for his loan. He was a very charitable man, though, having donated the land where the present Cathedral of Orizaba now stands, as well as the adjacent shopping center known as “El Mercado”.

El Palacio de Hierro served as the City Hall until the city felt it was not large enough for the growing needs of the local government and therefore moved to its present location.

The river that flows thru the city is a free linear Zoo with many animals to see. It basically starts behind the Municipal palace at the cable-car entrance and goes northward about 1.3 miles.

At the north end, across the road is another Eco-park with Bengal tigers and camels and other animals.