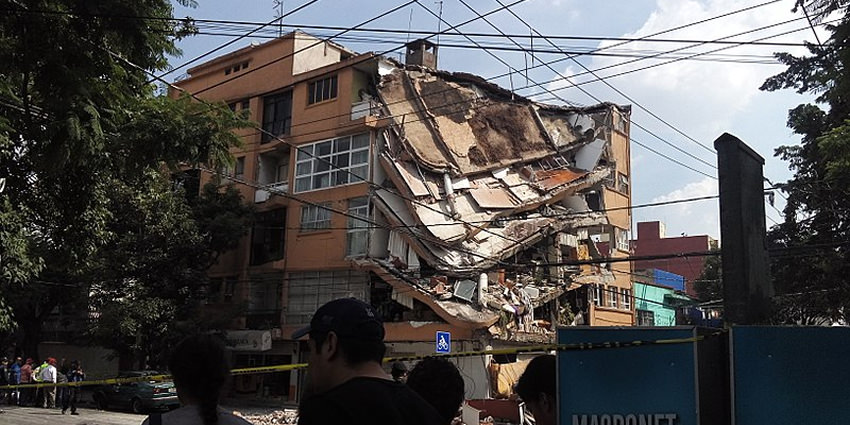 The earthquake caused damage in the Mexican states of Puebla, Morelos, and the Greater Mexico City area, resulting in the collapse of more than forty buildings.

Although Mexico’s SASMEX earthquake warning system provided 20 seconds of advance warning in Mexico City, 342 people were reported killed throughout the region (including 203 in Mexico City), and more than 6,000 injured.

The quake coincidentally occurred on the 32nd anniversary of the 1985 Mexico City earthquake that killed approximately 10,000 people. The 1985 quake was commemorated, and a national earthquake drill was held at 11:00 local time, just two hours before the 2017 earthquake.

There had been an even larger earthquake 650 km away off the coast of the state of Chiapas twelve days earlier.

Mexico is one of the world’s most seismically active regions, sitting atop several intersecting tectonic plates. The border between the Cocos Plate and North American Plate, along the Pacific Coast of Mexico, creates a subduction zone that is able to generate large seismic events.

Taken together with the activity along the edges of the Rivera and Caribbean plates, this causes the country to experience an average of 40 earthquakes a day.

Mexico City is built on a dry lakebed with soft soil made up of sand and clay that amplify the destruction caused by a major earthquake.

Loose sediments near the surface have a decelerating effect on seismic shockwaves that are slowing them down from 1.5 miles per second to roughly 150 feet per second.

This leads the waves’ amplitude to increase, while deeper and denser soil layers cause shockwaves to endure in the valley longer, thereby extending the length of the earthquake.

The possibility of a link between the earthquakes was being investigated in the days after the second one. Big earthquakes can increase the long-term risk of seismic activity by transferring “static stress” to adjacent faults, but only at a distance of up to four times the length of the original rupture.

On 19 September 2017, earthquake static stress transfer was considered unlikely due to the distance between the earthquakes, in excess of the expected 400 km maximum.

“Dynamic triggering”, with seismic waves propagating from one quake affecting other faults, may operate at much longer distances, but usually happens within hours or a few days of the triggering quake; a 12-day gap is hard to explain.

19 September is designated as a day of remembrance for the 1985 Mexico City earthquake, which killed approximately 10,000 residents.

Every year at 11 a.m., a national earthquake drill is conducted by the government through the use of public loudspeakers located throughout Mexico City. The 2017 drill took place as scheduled, at 11 a.m., around two hours before the central Mexico earthquake.

According to the National Seismological Service (SSN) of Mexico, the epicenter was located 12 km southeast of Axochiapan, Morelos, and 120 km (75 mi) from Mexico City. The earthquake was measured at a magnitude of 7.1, occurring at 13:14:40 Central Daylight Time, at a depth of 51 km.

While there was a report of strong shaking for about one minute, which is a long time for an earthquake, acceleration/velocity/displacement seismograms at UNAM showed about 20 seconds of strong shaking with a period of ≈1 second.

SSN reported a peak ground acceleration of 112 cm/s2 (0.114 g0) at the Popocatépetl reporting station in Tlamacas, Estado de México. According to the USGS, the earthquake occurred on a moderately dipping normal fault.

According to the bulletin of Mexico’s SASMEX earthquake warning system, 20 seconds advance warning was given in Mexico City.

However, the general experience in the capital was that the alarm and cellphone alerts started only a few seconds before, or during the quake, although some people may have mistaken the alert for a continuation of the earlier drill.

25 of the early-warning seismic sensors detected the earthquake, and alerts were also provided to Oaxaca, Acapulco, Chilpancingo, and Puebla, with lead times stated to range from 12 to 48 seconds.

Nine days after the earthquake, at least 333 people had been reported killed. At least 74 people were killed in the state of Morelos, 86 in Mexico City, 45 in Puebla, 13 in the State of Mexico, 6 in the state of Guerrero, and one in the state of Oaxaca.

In Mexico City, the bodies of 26 students and four instructors were pulled from the rubble of the Enrique C. Rébsamen school; 30 students and 8 adults were still unaccounted for as of the evening of 19 September.

The Mexico City campus of the Monterrey Institute of Technology and Higher Education suffered damage, with at least 5 people killed and 40 injured.

More than 5.400 people had been reported injured by the day after the earthquake, with more than 295 confirmed dead as Mexico earthquake rescue efforts continue.

In Puebla, church steeples had toppled in the city of Cholula, and a church on the slopes of Popocatépetl in Atzitzihuacan collapsed during mass, killing 15 people. A second church, which was built in the 17th century, fell in Atzala during a baptism, killing 11 people including the baby.

At least 44 buildings collapsed in Mexico City due to the earthquake, trapping people inside, creating large plumes of dust, and starting fires. At least 50 to 60 people were rescued by emergency workers and citizens.

Several buildings caught fire. Condesa, Roma, and del Valle neighborhoods were among those most affected in the zone: a building located on Álvaro Obregón Avenue collapsed, and several buildings on Ámsterdam Avenue suffered damage.

Gas leaks were reported, along with “piles” of rubble from collapsed buildings. Stock prices declined at the Mexico Stock Exchange but recovered before trading was suspended.

However, none of the generating stations in the region sustained structural damage.

Mexico City International Airport suspended operations while damage assessments took place, but reopened at 4:00 p.m. CDT (2100 UTC). 180 flights were canceled or diverted during the closure. A plane carrying President Enrique Peña Nieto, returning from touring the damage in Oaxaca from the earlier Chiapas earthquake, was diverted to Santa Lucía Air Force Base.

Mexico City Metro service was temporarily canceled on several subway lines due to a power failure, but restored by 17:30, offering free service to stranded passengers. Building evacuations also caused delays to Metrobús’ service in the city.

The declarations allow funds from the National Natural Disaster Fund (FONDEN) to be used during the emergency response phase.

The Mexican Army and Mexican Navy deployed 3,000 active-duty troops to Mexico City through the DN-III-E and Plan Marina emergency response plans. The troops were tasked with debris cleanup, search and rescue, and security missions.

Additionally, the Secretariat of National Defence moved eight helicopters to Mexico City and activated 3 shelters in the affected areas.