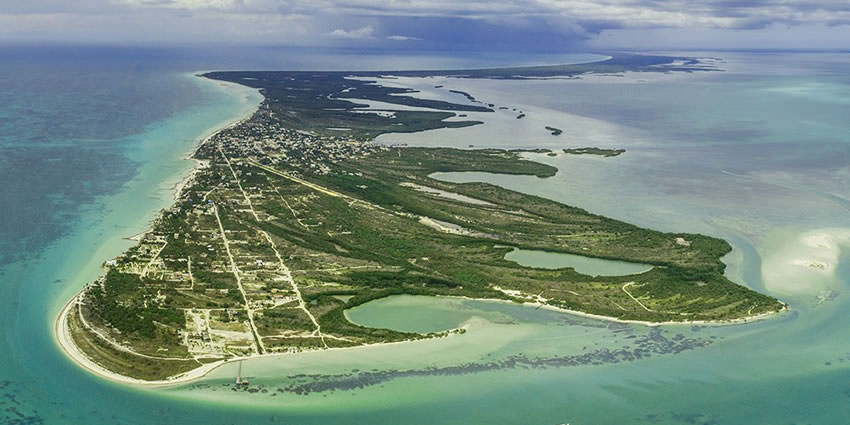 Holbox is an island in the Mexican state of Quintana Roo, located on the north coast of the Yucatán Peninsula. Holbox Island is part of the Municipality of Lázaro Cárdenas and also part of the Yum Balam Biosphere Reserve.

It is approximately 41.84 kilometers long and 1.5 kilometers wide, and it is separated from the mainland by 10 km of the shallow lagoon that is home to flamingos, pelicans and other rich birdlife.

Isla Holbox is one of the best places on the planet for relaxation, great weather and charm. It’s a mini paradise island you have to visit in your Mexico travel.

Holbox is located north of Cancun in Quintana Roo, at the top of the Yucatan Peninsula. While lots of the Riviera Maya is saturated with hotels and holidaymakers, this area is far enough away to have retained some real charm.

During hurricane season, the island is often evacuated as it can get directly damaged by hurricane winds.

Holbox is part of the Yum Balam Flora and Fauna Protection and Biosphere Reserve, created by the federal government as a protection area on June 6, 1994, during the administration of Carlos Salinas de Gortari.

It is accessible by sea from the port of Chiquilá, where you can take the ferry to cross the Yalahau Lagoon, in an approximate journey of 20 minutes, or by a private boat service.

Holbox is a natural refuge of several species, both endangered and threatened. and most of the inhabitants are interested in protecting that area. Hence, it hosts tourism projects with a sustainable focus, seeking a minimal impact on the various ecosystems, fauna and endemic vegetation in the area.

Within the island, there is no pavement and there are only some cars, all streets are white sand, which allows pedestrian travel.

Traditional means of transportation are electric or gasoline golf carts and bicycles.

These lands have been inhabited since time immemorial by the Maya. Before the conquest, it was part of the Ekab chieftaincy, which extended from Cabo Catoche to Ascension Bay, along with the islands of Contoy, Isla Blanca, Isla Mujeres, Cancún and Cozumel.

The first mentions of the island were in 1852 from a document sent by Don Bartolomé Magaña to the Governor of Yucatán.
The adjacent mainland was frequently attacked by the Maya, therefore, people sought refuge on this island.

In the late nineteenth century, the largest islands, well protected from the sea, received from Yucatan many survivors fleeing the Mayan social rebellion, known as the Caste War and, around 1891, formed the Party of the Islands, with head in Isla Mujeres and that included Holbox.

As of 1880, some Yucatecan businessmen began the colonization of the peninsular north and created the Colonizing Company of the Eastern Coast and the Company El Cuyo and Annexes. This occupation was carried out between 1880 and 1920, in order to expand and diversify the agricultural and forestry border of Yucatán; Therefore, at the beginning of the century there were already estates and towns such as Solferino, Moctezuma, Punta Tunich, Yalahau, Chiquilá, San José, San Fernando, San Ángel, El Ideal and the sugar mill San Eusebio.

Hurricanes in 1886 completely destroyed the island, but the island was rebuilt following.

On November 24, 1902 the Federal Territory of Quintana Roo was created, so Holbox was integrated as a Sub-Prefecture of the Northern District.

In 1910 the population of the state was grouped into eight municipalities, which for economic reasons were divided into three areas that still persist: north, center and south; The north zone included the municipalities of Holbox, Cozumel and Isla Mujeres. At that time, Holbox was the municipal seat of eight locations, but shortly after, in 1921, Isla Mujeres absorbed them.

In the mid-twentieth century, coastal towns, with few exceptions, increased their population, which generated an over-exploitation of resources. In 1960 there were structural changes in the settlements, the importance of Holbox decreased and its population was reduced to scarce 500 inhabitants. The decade of the seventies was key for Quintana Roo because it was at that time when its population structure changed and, in 1974, it became a state.

Things to do in Isla Holbox

Holbox island not yet heavily touristed, the island’s main industry is fishing. However, the island is developing a growing tourist industry in the form of whale shark viewing.

Holbox has several alternatives to enjoy nature, but the one that attracts most visitors is the experience of swimming with the impressive whale shark from June to September, an opportunity you can experience in very few parts of the world.

Holbox has one of the safest beaches for learning how to kiteboard. Conditions are ideal for beginners, as the beach has shallow waters, no big obstacles on the wide and long beach, many days of wind during the winter months, and a nearby school with professional instructors.

30 minutes from Holbox is Yalahau, a spring of crystalline waters that encloses as much beauty as history. It is said that it has healing properties, so this beautiful eye of water is considered a “fountain of youth.”

It was an important merchant port for the state, it was located in the coastal region of the current municipality of Lázaro Cárdenas, almost in front of the island of Holbox and a few kilometers from the port of Chiquilá.

Its location at the entrance of the so-called Yalahau Lagoon or Conil Bay was due to the greater depth of its waters, fishermen and Mayan travelers used the place as a source of fresh drinking water.

Pajaros Island is a small islet covered with mangroves and cacti located in the Yalahau or Conil lagoon, where a great diversity of birds live, some in danger of extinction; So there are two viewpoints and walkers in order to minimize direct contact with the birds, in order to protect the natural environment while admiring them.

Flamingos, cormorant, herons, frigates, pelicans, wild ducks, seagulls, are just some of the species to observe in a space still in a natural state.

Passion Island is a small islet that is 10 minutes from Holbox by boat. It is recommended to enjoy virgin beaches, the sun and the sea; for its calm atmosphere and its tropical adventure space, far from civilization.

In the vicinity of Cabo Catoche, and during the colonial era, a Catholic temple was built, which is known as Boca Iglesia. There are no walkable roads to reach Cabo Catoche by land, only by sea you can access to visit the ruins of Ekab and Boca Iglesia.

Lobster is the main product of this fishing and many of the dishes made on the island center around lobster or other seafood.

How to get to Isla Holbox

The island has virtually no cars, with transport by most residents and tourists by golf cart or moped. The entrance of vehicles is not allowed at Holbox in order to protect the environment and to prevent the streets from getting sand.

There are several ways to reach Holbox. You could travel by car or public bus to Chiquila port and then catch the Holbox ferry across to the island. Or you can fly to the island by plane. Your plan will depend on where you’re coming from and how much you want to spend.

Traveling to Isla Holbox by plane

There’s a tiny airport on Isla Holbox, so you can reach the island by private plane. Most flights leave from Cancun airport, but you can also make arrangements to fly from Playa del Carmen, Tulum, Cozumel and Merida. The journey time is around 40 minutes, making it the quickest way to reach Holbox.

It’s not cheap though. Prices start around 470 USD one way, and as the planes are small, there may be limits on how much luggage you can take. You can check out all the latest prices and info on the Flights Holbox website.

You’re guaranteed some incredible views from a plane window!

The cheapest and easiest way to get to Holbox is by public bus. Rather than the collectivos (minibuses) you see all over Mexico, these are smart coaches run by ADO (Mexico’s main bus network).

The buses drop you off at the ferry port in Chiquila, where you can buy tickets for the ferry to the island.

You can check out all the latest prices and info on the ADO website.

Approximate costs of buses to Holbox (including journey time)

Traveling to Isla Holbox by car

As with the bus routes, if you travel by car, the furthest you can get is Chiquila port, where you’ll need to park up and hop on the Holbox ferry.

rom Cancun, it’s just two hours by car to Chiquila. Once in the town, you’ll need to find somewhere to leave your car. While none of it feels very official, there are lots of small car parks – i.e. enterprising locals letting you park in their yards/garages for a small fee!

There are two ferry companies operating between Chiquila and Holbox and funnily enough, they offer exactly the same service and cost the same price. The only difference really is that one runs on the hour, and the other on the half-hour, meaning you’ll never wait long for the next boat.

The ferry to Holbox takes 15 minutes. You can travel on the Holbox Express on the way there, and catch the 9 Hermanos ferry when you leave. Tickets for the Holbox ferry cost 150 MXN per person for adults and $100 MXN for kids.

Traveling to your hotel on Isla Holbox

When you step off the ferry you’ll be greeted by a row of golf carts, ready to drive you to your Holbox accommodation. You’ll pay between 20-30 MXN (around £1) to be driven the few minutes across the island to the center.

If you don’t have much luggage, then the walk to the main square takes less than ten minutes.