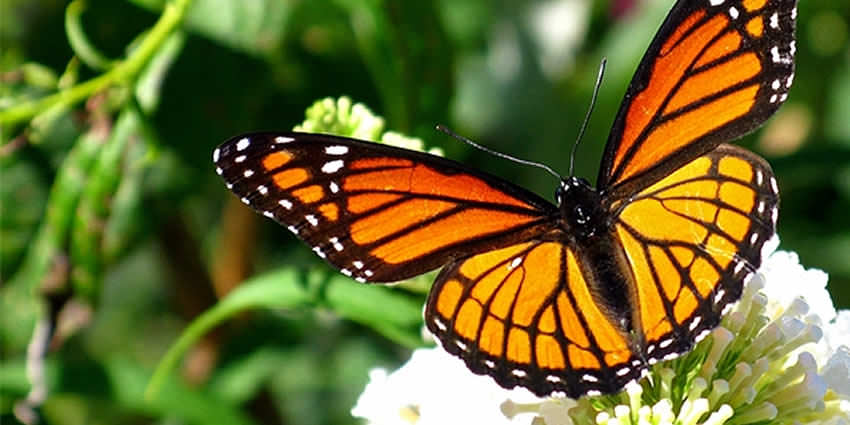 The Monarch Butterfly Biosphere Reserve (Spanish: Reserva de Biosfera de la Mariposa Monarca) is a World Heritage Site containing most of the over-wintering sites of the eastern population of the monarch butterfly.

The reserve is located in the Trans-Mexican Volcanic Belt pine-oak forests ecoregion on the border of Michoacán and the State of Mexico, 100 km (62 miles), northwest of Mexico City. Millions of butterflies arrive in the reserve annually.

Butterflies only inhabit a fraction of the 56,000 hectares of the reserve from October–March. The biosphere’s mission is to protect the butterfly species and its habitat.

Most of the over-wintering monarchs from eastern North America are found here. Western researchers discovered these areas in 1975. Presidential decrees in the 1980s and 2000 designated these still privately held areas as a federal reserve.

The Reserve was declared a Biosphere Reserve in 1980 and a World Heritage Site in 2008. The reserve remains predominantly rural.

Reserve administrators continue to be concerned with the deleterious effects of illegal logging and tourism. Conservation efforts sometimes conflict with the interests of local farmers, community-based landowners, private land owners, and indigenous people.

The reserve was designated in 1980 by President José López Portillo.

In the late 1980s, reserve management was delegated to the Secretariat of Urban Development and Ecology. It was at this time assigned the category of “special biosphere reserve.”

In 1986, the area and boundaries of the zones were defined. In 2000, it received its name (Reserva de la Biosfera Mariposa Monarca).

UNESCO declared the biosphere a World Heritage site in 2008 as a Natural Asset. Currently, the area is known for tourism, logging, mining, and farming. It has remained mostly rural, noted for communities of Otomi and Mazahua.

Millions of butterflies travel south into Mexico, from Texas, and then follow the Sierra Madre Oriental mountains to the preserve. The butterflies congregate, clustering onto pine and oyamel trees. To many, the trees appear orange and branches sag from the weight.

Come spring, these butterflies migrate across America, sometimes ending up in Eastern Canada. Over the time it takes them to make this journey, four generations of monarch butterflies are born and die.

The monarch butterfly’s migration patterns are altered by climate change. During migration, monarchs fly north once they are exposed to cooler temperatures. Dense congregations are thought to conserve heat.

If warmed by the sun, the butterflies take flight. the beating of their wings has been compared to the sound of light rain. The reserve is susceptible to lethal, freezing temperatures.

The reserve extends from the mountainous forests of eastern Michoacán to western Mexico State 100 km northwest of Mexico City.

The reserve in Michoacán contains the highest elevations in the state, including peaks that reach 2,700 masl (meters above sea level).

The reserve is characterized by outcroppings of basalt forming fissures, faults, and cliffs in a northeast-southwest orientation. Rock formations have replaced older ones such as volcanic cones and old lava beds.

The soil is highly permeable, resulting in little surface water. There are some small ponds and arroyos. The forests of pine and oyamel fir trees provide microclimates that provide shelter when temperatures fall to freezing and/or there are winter rains.

This area is predominantly covered in forests. The composition of the forest varies with altitude:

Below 2400 masl, there are small areas with junipers, cedars, and meadows.

Areas have been modified by agriculture and human settlements.

The wildlife in the area ranges from the sub-tropical to the sub-arctic including a number of species that are endemic only to this area.

There are fourteen major butterfly colonies located in these rugged forested mountains, which account for more than half of the colonies of the monarch butterfly’s eastern U.S./Canada population.

It is estimated that up to a billion individuals spend winter here in any given year. These colonies are dense, with between six and sixty million butterflies per hectare.

The reserve areas are found in the municipalities of Ocampo, Angangueo, Zitácuaro, and Contepec in Michoacán and Donato Guerra, Villa de Allende, and Temascalcingo in the State of Mexico. They are divided into five principal zones or nuclei.

Eight of the fourteen colonies are in the protected area. The colonies properly cover only 4.7 hectares, but the protected biosphere area covers 56,259 hectares.

Five colonies are open to visitors:

There are other colonies near San José Villa de Allende and Ixtapan del Oro, but they are not actively promoted for tourism because of the risk of harm to these butterfly colonies.

El Rosario is the largest sanctuary in Michoacán, where the butterflies cover about 1,500 trees.

While the Biosphere still has problems with infrastructure, most notably with trash (especially around parking and merchant areas), a number of improvements have been recently made, most notably in the sanctuary of El Rosario.

These include well-defined footpaths with security patrols and stone/or concrete steps in steep places to help against erosion. Horsepaths were also eliminated for erosion reasons. Only two areas have significant installations.

In the Sierra Chincua there is a research facility dedicated to the monarch butterfly and a nursery for reforestation efforts. At Cerro El Companario there are facilities for tourism.

Conservation efforts were first intended to protect the butterflies.

Research, conservation, and other efforts are now focused on preserving the habitat. The interests of residents, land owners, farmers, farmer cooperatives, and local communities have been taken into account regarding conservation but conflicting interests remain.

Even though the Mexican government designated the area as a biosphere reserve most of the area of the preserve is owned by 38 ejidos, seven indigenous communities, and 16 private holdings.

The survival of the species depends on a large number of habitats in Canada, the United States, and Mexico during its annual migration cycle. The three countries adopted a plan in 2008 for the conservation of the butterfly’s habitat through its migration routes.

Within the Biosphere in Mexico, the greatest threats to the butterfly habitat are deforestation, illegal logging, unorganized tourism, forest fires, and lack of cooperation among various authorities.

Most of these dangers come from the surrounding human settlements, which put pressure on the natural areas to provide agricultural space and forestry products such as fuel and wood for manufacturing furniture and other crafts.

The closest urban center is Zitácuaro, whose growth has promoted the growth of the other, more rural settlements.

In spite of this, most of the area is still occupied by dispersed rural farming communities of Otomi and Mazahua peoples, especially in Mexico Stateside. Many of the protected hectares do not belong to the government directly, rather they are lands divided among 59 ejidos, thirteen indigenous communities, and 21 individual holdings.

Because of this and the fact that the reserve is divided by a state line, conservation efforts are complicated. Many communities in this region are very poor, with high illiteracy rates and childhood malnutrition, with scarce access to basic services.

In the past, mining provided much of the area’s jobs but mines have since been depleted and most live on subsistence agriculture.

These communities also have a tradition of exploiting forest areas, mostly to obtain wood for furniture making and other crafts. High unemployment, especially for youth, also provokes migration out into other parts of Mexico and to the United States or Canada.

Most of the butterfly colony areas still host economic activities such as subsistence farming and livestock raising.

In some areas, such as Sierra Chincua, Cerro Pelon, and El Rosario, there are still problems with illegal logging to supply local fuel needs as well as raw materials for handicrafts.

El Rosario is named after the local ejido which belongs to about 10,000 “campesinos” or rural farmers. Many of these people make a living through farming and the sale of handicrafts and food to tourists.

Information about the butterflies is insufficient as it is not known the full extent of their wintering areas or the ecology of the area. Because of this, it is not known how large the reserve really needs to be for the preservation of the butterfly.

Conservation is mostly done through restrictions on the lands but the management of the reserve has not had direct participation by the communities affected by it.

Some public and private entities have worked with communities to develop incentives to conserve forests and take advantage of the tourism that the butterflies bring. However, success in this has been spotty.

Some communities are pushing back against the restrictions and demanding to be allowed to use more land for agriculture.

Since conservation efforts began, there has been progressing. While infrastructure is still lacking, advances have been made in areas such as trash control and control of access into the protected areas.

One effort by the World Wildlife Fund has been the coordination of international biologists and ecologists to improve the design of the reserve.

A permanent monitoring system has been established to ensure the forests remain healthy and control clandestine logging and forest fires. On Mexico Stateside, the largest sanctuary is located between San José Villa de Allende and Ixtapan del Oro.

It is not actively promoted for tourism to keep damage to the area to a minimum.

During winter 2008-2009, there are plans to tag as many of the wintering butterflies as possible using very light self-stick tracers so as to not impede their flight. The purpose of this is to determine the butterfly’s exact migration route as they fly back north to the U.S. and Canada in the spring.

Butterfly counts coming in from the United States and Canada in recent years were relatively stable in the 2000s, with a dozen confirmed colonies as of the 2007-2008 winter. In general, the number of colonies varies between eight and twelve.

Five of the eight colonies are located in Michoacán but only two are open to the public: Sierra Chincua in Angangueo and El Rosario in Ocampo. Both receive visitors starting from November until March. They offer guided tours.

In the State of Mexico, La Mesa and El Capulin are open to the public.

These reserves are visited by thousands of Mexican and international tourists, principally from the United States, Canada, Spain, France, Germany, and Japan. The best known and most visited of the butterfly colonies is El Rosario.

In February, Angangueo celebrates its Festival de la Mariposa Monarca (Monarch Butterfly Festival). This festival began in 1992 to promote awareness of the butterfly habitat, take advantage of the ecotourism it offers and promote the culture and arts of the area.

In 2010, the festival included the participation of the Symphonic Orchestra of Michoacan, The Enrico Caruso Ensemble, and the showing of an exhibition called “Papaloapan” about the monarchs by visual artist Luis Moro, as well as dance and photography workshops.

These events took place at venues in Angangueo and other nearby communities. A new photographic exhibition has been assembled to highlight the connection between the migration and the people of Michoacán.

In January 2016 Google search devoted its Google doodle to The 41st anniversary of the discovery of the Mountain of the Butterflies.