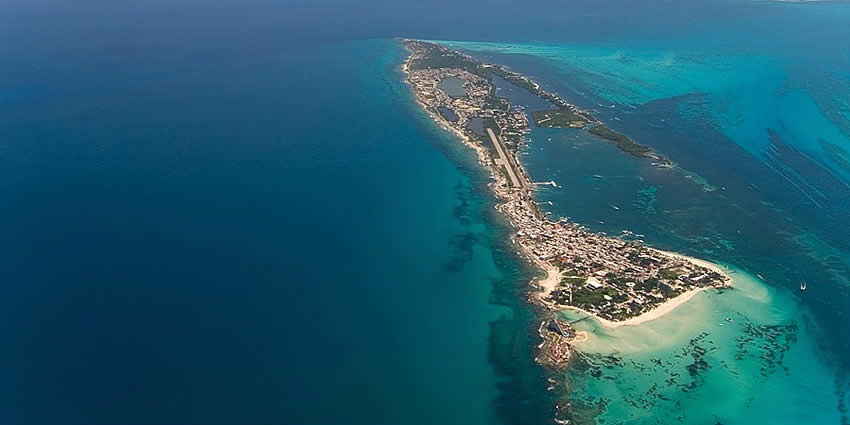 Isla Mujeres (“Women Island”) is an island in the Caribbean Sea, about 13 kilometers (8.1 mi) off the Yucatán Peninsula coast.

The island is some 7 kilometers (4.3 mi) long and 650 meters (2,130 ft) wide. To the east is the Caribbean Sea with a strong surf and rocky coast, and to the west, the skyline of Cancún can be seen across the clear waters.

The north end sees the most tourist action with the main town area (which is extremely compact and walkable) and the ferry while the south end is host to mostly private homes and guest houses. Many locals live in the central part of the island.

In the 2010 census, the namesake town on the island had a population of 12,642 inhabitants.

The island is part of the Isla Mujeres Municipality in the State of Quintana Roo, Mexico.

The island is popular with day-trippers, but activity quiets down in the evening after the tour groups leave.

In Pre-Columbian times the island was sacred to the Maya goddess of childbirth and medicine, Ixchel.

When the Spanish arrived in the 16th century they named it “Isla Mujeres” because of the many images of goddesses.

The first information available about Isla Mujeres is from the period between 564-1516 AC when it was part of the Maya province called Ekab. There were 4 Maya provinces in what is today the State of Quintana Roo.

The Maya also exploited the salt that the island produced in the “salinas” (small interior lagoons). The salt was used not only for the conservation of food and medicine but also as a generally accepted currency for the commerce of goods along the whole Maya region.

Since the 1970s, along with close-by Cancún, there has been substantial tourist development in Isla Mujeres.

Located on the road to Garrafon, 3.5 kilometers before Playa Lancheros and Playa Paraíso.
It is a 19th-century hacienda built by Caribbean pirate Fermin Mundaca. The hacienda includes walls, arches, exotic plants, gardens, birds breeding places, cattle, and an orchard.

A 19th-century slave trader and reputed pirate, Fermín Antonio Mundaca de Marechaja fell in love with a local woman known as La Trigueña (The Brunette). To win her, Mundaca built a two-story mansion complete with gardens and graceful archways. But while Mundaca was building the house, La Trigueña married another islander. Brokenhearted, Mundaca died, and the hacienda fell into disrepair.

Some documents indicate that Mundaca died during a visit to Mérida and was buried there. Others say he died on the island, and indeed there’s a grave in the town cemetery that supposedly contains his remains. Despite the skull and crossbones on his headstone (a common memento mori), there’s no evidence that Mundaca was ever a pirate. Instead, it is said he accumulated his wealth by transporting slaves from Africa to Cuba, where they were forced to work in mines and sugar-cane fields.

Today the complex has some walls and foundations, a large central pond, some rusting cannons, and a partially rebuilt house. At the southern end stands a gateway with an impressive stone arch. The shady grounds make for pleasant strolling, but watch out for the droppings of spiny-tailed iguanas.

Isla Mujeres has several fine stretches of beach that run along the northern end of the island. It has shallow waters and stunning white sand. The beach is full of fun restaurants and bars as well as several hotels. This is where the majority of travelers will spend their beach time so it can get crowded during peak season.

The northern end of the island is Playa Norte which has a wide swatch of sand that is lined with palm trees and also a few beachfront restaurants and bars. The soft white sand and level beach area make for an ideal beach volleyball court.

As of November 2016, Playa Norte has been badly eroded with much of the beach missing.
The main volleyball-playing area on Playa Norte in front of Buho’s swing bar is now gone, a victim of changing tides and a diminishing beach which locals attribute to the moving of sand from the surrounding ocean floor to build back Wilma-damaged Cancun’s beaches. Alas, the big, beautiful pre-Wilma Playa Norte is no longer, though there is hope that it will eventually come back.

At the northwestern tip of the island and is the neighboring beach to Playa Norte. Playa Sol is the best location to watch the sunset and is usually a little less crowded than the neighboring beach. Although it is less crowded, the water is not as shallow and clear as Playa Norte. One other advantage is that drinks are less expensive along Playa Sol.

A small Maya goddess Ixchel temple was once located on the southern tip of the island. A small ruin that was once a lighthouse and temple to Ixchel, goddess of fertility.

However, in 1988, Hurricane Gilbert caused extensive damage, leaving most of the foundation but only a very small portion of the temple.

Now there’s a modern art sculpture park in the area as well.

From mid-May through September hundreds of whale sharks gather in the waters near Isla Mujeres, with peak season in July and August. Trips can be booked anywhere on the island, but official operators who have agreed to uphold certain standards and implement safety measures to protect the sharks operate mostly out of dive shops and charge a set price of $125 (2011) with possible discounts available for multiple trips; street vendors will charge as little as $80 per trip, but be aware that these are not official tours. Tours will generally include breakfast, snorkeling gear, 8-10 people per boat, a 45-60 minute trip out to the whale shark area, and then 3-4 trips in the water with the sharks for 2-15 minutes each time, depending on the number of sharks (more sharks, more time in the water). The return trip includes lunch, ceviche, and a snorkel at a local reef. All passengers must wear life-jackets in the water unless you have your own wet suit, a useful tip since it is much easier to swim with the sharks in a wet suit than it is in a bulky life jacket. $0-$125.

The southern side of the island lacks a sandy beach but offers snorkeling where fish abound and the crystal clear water makes for an enjoyable swim. The reef that lies within the protective buoys has been severely damaged by storms and years of careless treatment by snorkelers, but a revamp of the park several years ago has created a healthier environment for the coral, and it thrives more with each passing year. The entrance to the park is expensive. Tour boats from Cancun bring hordes of day-trippers who mostly stay within the park, so it can become quite crowded during the peak of the day. A useful tip for those staying on the island is that you can snorkel in the waters adjacent to the Garrafon park for about 60 pesos, and the sea life is still very impressive.

Located on the northwest side of the island on the Peninsula of Sac Bajo is Dolphin Discovery. It is a small amusement park with cahins in other pasts of the Caribbean (including Cozumel) well known for allowing visitors to interact and swim with dolphins in an enclosed area. The park has a list of activities ranging from dolphins to other marine mammals. If traveling from Cancun, visitors can take a bus or taxi to Playa Langosta which is located at Boulevard Kukulcan Km. 5. It is between the Casa Maya Hotel and Vacation Club International. There, Dolphin Discovery representatives can check visitors in and direct them to a ferry which takes 40 minutes to get to the docking area of Dolphin Discovery.

Scuba diving and snorkeling. around Isla Mujeres is unforgettable. The Manchones Reef begins just off of Isla’s shore and the Cuevones and Banderas Reefs are close by. The waters are calm and clear – perfect for the beginner as well as the advanced diver. With 50 accessible sites, Isla Mujeres is a great option and a little unknown with all the hype that Cozumel (its large neighboring island) gets. Those staying in Playa Norte may enjoy snorkeling in the lagoon next to the Avalon Hotel which has a respectable number of fish in an easily-accessible location.

One does not need to shell out the large sums of money to go sport fishing on Isla. Just talk to the local hotel/guesthouse employee and they can set you up with a local fisherman who will take you out fishing. Prices are about $40/person for 3-4 hours of fishing. Whatever fish you catch, you can take to a local restaurant and they will prepare the fish however you like.

There is also a bus service that runs from the downtown to the different neighborhoods, called colonias in Spanish (where most of the locals live).

For multiple excursions to the south end of the island, the best option is to rent a scooter or golf cart.
The roads are all paved and the main road makes a loop the whole way around the island. Be aware that when driving on the Caribbean side of the island, there are occasional strong gusts of wind that can really take you by surprise on a scooter, as can the many topes, or speed bumps.

The island is also served by Isla Mujeres National Airport.

There are numerous places to eat fresh seafood cooked with local and traditional recipes, and other restaurants offer Mexican, Yucatecan, Italian, Caribbean, Mediterranean, Hebrew, French, Thai, Cuban, and Maya cuisine. Hotel prices vary from cheap to very expensive at the resorts on the southwest end such as Hotel Villa Rolandi, and Playa Norte.[citation needed] In the north is El Centro (downtown), whose central axis, Hidalgo Street, is the main dining and entertainment area. Also located on the north end is a famous beach called Playa Norte, which has recovered quickly since Hurricane Wilma hit the area in 2005. Besides these attractions, swimming with dolphins can also be experienced on the Island.

The island of Isla Mujeres is located close to one of many coral reefs such as the one located in Garrafon Park, which is an area popular for its snorkeling and scuba diving. The Cancún Underwater Museum, created by English sculptor Jason deCaires Taylor, is located off the western coast of Isla Mujeres. Isla Mujeres is also home to a population of sea turtles. Because of the recent endangerment of sea turtles in the area, a facility was set up on the southern end of the island for their rehabilitation and breeding. This facility is open to the public.

The island’s relative proximity to Cuba has made it one of the favorite stepping stones of Cubans trying to reach the United States in recent years.

The police patrol the beaches looking for tourists to exploit. If you are caught with marijuana or public drunkenness, the police will intimidate you and try to get a bribe out of you. Stay calm and use a video camera to protect yourself. There are also fake police who do the same thing. If they are not in full uniform, they are not real police! They are simply trying to scam you.

In addition to the above, some places work in cahoots with these “police” to try and sell you something you have no interest in and then claim you owe them money and therefore mobilize these “police” to pull out handcuffs and threaten you with arrest. Muelleazul (on the left after you get off the ferry) is such a place.