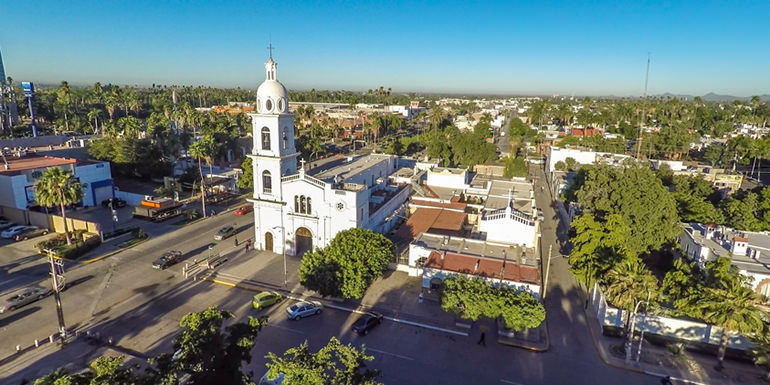 Los Mochis is the western terminus of the Chihuahua-Pacific Railroad, or ChePe, which passes through the scenic Copper Canyon. This railway was originally conceived by Albert K. Owen and approved by President Porfirio Díaz as a trade route linking the cattle markets in Kansas City with the nearest port on the Pacific Ocean, Topolobampo.

Today the North Pacific irrigation region (Sinaloa-Sonora) in which the Fort Valley is the largest district and is the principal agricultural area of Sinaloa, containing over 70% of all irrigated land and producing sugar cane, cotton, rice, flowers, and many types of vegetables. The valley is one of the largest producers of mangoes in Mexico. Air transportation is provided by Los Mochis International Airport. Nearby Topolobampo is the second largest natural deepwater port in the world, and is known for its commercial fishing and increasingly important role in shipping.

Climate in Los Mochis is semi-arid wet and dry, bordering on arid.

Rainfall concentrates in the summer: it is common to see thunderstorms and even occasionally hurricanes in August and September, but winters are dry with almost no rainfall, though on 29 December 1978 133.4 millimetres (5.25 in) fell.

Los Mochis (from mochim, plural of mochic, Cahitan for “earth turtle” and used to refer to the flowers of Boerhavia coccinea) was founded in 1893 by a group of American utopian socialists who were adherents of Albert Kimsey Owen, an American civil engineer who built the first irrigation ditches in the valley. The colony, organized under the principles of utopian socialism, survived for 31 years. Albert K. Owen, the American civil engineer who came to do studies for the construction of a railway, was enchanted by Ohuira Bay and imagined the city of the future, where railways and shipping lines converged to ship throughout the entire world. Today, the port city of Topolobampo continues to be developed and may one day reach Owen’s dream.

The city itself was founded by a businessman named Benjamin F. Johnston, who came to make a fortune in the cultivation of sugarcane. The founding of the sugar mill produced a population boom in 1903.

Benjamin F. Johnston arrived at Topolobampo attracted by the city project of Owen. Johnston saw an opportunity to exploit resources such as sugar cane and together with Edward Lycan, who had been linked to Zacarías Ochoa, owner of a Trapiche (raw sugar mill) named “El Águila”, initiated the construction of a sugar mill. Ochoa died suddenly, and Johnston seized businesses that Lycan and Ochoa founded. “El Águila Sugar Refining Company” later became “United Sugar Company.”

In 1898, Johnston laid the first stone of the sugar mill and drove the rapid growth of the city around it. The first harvest was welcomed in the year 1903.

Johnston was a very powerful and influential businessman, so powerful that he was the one that drew the street plans for Los Mochis; a modern city with wide and straight streets. It was not recognized as a city until 1903 along with Topolobampo. On 20 April 1903 a decree is founded by the mayor of Los Mochis, during the state government of Francisco Cañedo. In 1916, establishing the town of Ahome and since 1935 the municipal seat of the latter is located in the city of Los Mochis. It is currently the commercial center of Valle del Fuerte and its radius of influence extends from the southern part of the neighboring state of Sonora and to the municipalities of El Fuerte, Sinaloa, Choix and Guasave in Sinaloa.

The economic development of the city began with the sugar industry, but in recent decades, its progress rests on the high-tech agriculture is practiced throughout the northwestern region of Mexico.

A group of enthusiastic people in la Villa de Ahome, under the name of “separatist” fought to create a municipality outside the hegemony of El Fuerte, achieved its objectives until 5 January 1917 that the mayor came to El Fuerte install new city hall in which he presided Ramon C. López who had been appointed by the state governor Francisco Cañedo.

The municipality of Ahome was created by decree of the Local Legislature dated 20 December 1917, being governor of the state Gral. Ángel Flores, and was appointed head of the municipality of La Villa de Ahome.

In 1918 Florencio A. Valdés, was the first elected mayor.

The City Council Ahome preceded by Modesto G. Castro decided to make the move to the town of Los Mochis, justifying that this population had grown so much that already exceeded several times to La Villa de Ahome.

The City Council Ahome, in a decision dated 1 April 1935, allowed the change to the header, and the State Legislature passed it through another decree issued on May 10 next, which was published in the Official Journal of State the 30th day of the month.

The transfer took place without major problems right away and offices were installed in the house owned by Don Fco. Beltran, located at the corner of Hidalgo and Zaragoza next to the local occupied by the former Sindicatura.

The old town of Ahome, to remain laggard in the process of the region, had also been relegated to second place. Since then the city of Los Mochis, as the town of Ahome whole have had major changes both economic and social policy have remained constant progress to the municipality.

Historically, the city was on the main north-south route from Nogales to Mexico City. This service ended in the early 2000s.

The city’s airport is served by seven commercial airlines, including Volaris with Airbus jet aircraft flights.

The new RV park, just north of Los Mochis is now open for business.
It is situated just south of the San Miguel toll booth, turn left opposite the Pemex, its a few hundred feet down the side road on your right.
Minimal services right now, but they are going in. Owner can speak English.