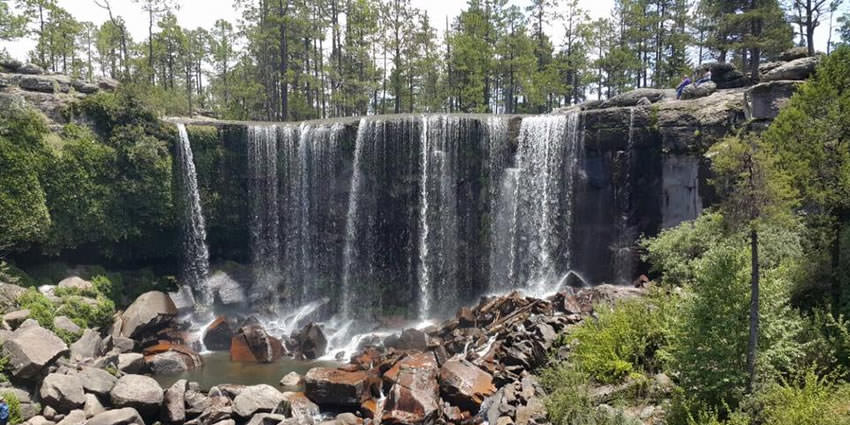 Mexiquillo is a natural park located west of the state of Durango, in the municipality of Pueblo Nuevo, on the Sierra Madre Occidental. It is the most visited natural site in the state and one of the most attractive.

A charming place with unique landscapes, excellent for ecotourism. There is a rock garden that was formed in prehistory and offers a visual spectacle. There is a spectacular natural lake and the river channels pass through magnificent waterfalls, that grow even more in the storms.

The park has an area of ​​13,475 hectares, of which 152.75 hectares are virgin forests as an ecological reserve. Waterfalls, a system of ravines, tunnels, numerous rock formations and a dense coniferous forest can be found throughout the park.

A lot of ecotourism and adventure activities such as camping, which is the most common, hiking, kayaking, rappelling, mountain biking, and even mountaineering, are practiced in the park by visitors.

Although it is not yet a national park or a natural monument, it is constituted as a high mountain tourist center and has accommodation services close to the town of La Ciudad, located near the park.

Whether by foot, bike, or on a 4×4 vehicle, going through them is an exciting adventure!
The best way to enjoy this paradise in the woods is to camp at least one night on it. There are designated areas for this, but you must bring your own gear. In the end, as you witness the sunset in the midst of the forest, you will realize that it was all worth it.

Although there are no records of settlers prior to the establishment of the town of La Ciudad, it is known of the presence of indigenous groups that toured the Sierra Madre Occidental before the construction of sawmills for the use of the forest.

During the administration of President Adolfo López Mateos, the Durango – Pacifico railroad plan began to be built, an idea similar to the current Chihuahua – Pacifico railroad. The town of La Ciudad began around 1960 as a non-permanent town of railway builders and workers for the many sawmills that were built in the surroundings.

Several tunnels that pierce through the mountains of the Sierra Madre Occidental were built for this purpose. The project never came to conclusion because another similar project, the Durango – Mazatlan highway became a more reliable and less expensive project that would communicate the coast with the state capital. But the tunnels remain and have become one of Mexiquillo’s top attractions.

The town of La Ciudad remained on the route of the new road, while the embankments and tunnels remained through the railroad track. Over time, there were more and more visitors willing to walk to admire the waterfalls from the embankments and tunnels that the project left unfinished and thus the idea of ​​converting the site into a natural park and at the same time into tourist development.

Proudly known as “The Spine of the Devil”, the Sierra Madre mountain range presents visitors with the stunning panorama known as Mexiquillo Canyon. Over 8,000 feet deep, this canyon’s amazing beauty draws travelers from all over the world.

The beautiful Mexiquillo waterfall, where the river crosses one of the long-defunct railroad tunnels, and gain stunning panoramic vistas of Mexiquillo’s canyons, where the entire scene is covered by a green carpet of foliage.

Among the most significant attractions of the place are:

In the plains of the park there are numerous rock formations that exceed 7-and even 8-meters high, these formations are constituted by extrusive igneous rock, and to a lesser extent, rhyolite; there are also some formations of basalt and plutonic rock. This area of ​​the park is known by the locals as “Garden of Stones” alluding to the unique arrangement of the rocks through clearings in the forest.

In the park there are numerous waterfalls, although some of them are not close to the common route of visitors, the best known is the Mexiquillo waterfall that is 20 meters high. The three main rivers that cross the park have different waterfalls that exceed 50 meters.

Part of the main route of the place is the route of the road commonly called “embankment”, this road was enabled through the forest to carry the railroad tracks, and, in the steep parts, tunnels were built to save the difficult terrain of draw. In Mexiquillo there are nine main tunnels, all with an amplitude of 5 meters and a height of 6 meters to facilitate the passage of the unbuilt railway, the lengths range from 100 meters to 1.68 kilometers. They are built as a barrel vault. It is highly recommended to use flashlights in its path since visibility is lost inside. The last tunnel was blocked in 2009 by a landslide in the rainy season.

The forest of the place is very dense, with a lot of variation in vegetation due to microclimates caused by topography and altitude.

What to do in Mexiquillo?

In the vastness of the forest you will find several waterfalls of all sizes. The most stunning of all is known as Cascada de Mexiquillo, a 65 feet fall that you can rappel over.

La Ciudad River is the main body of water crossing through the natural park. You may want to just sit and admire it but, if you’re feeling adventurous, you can’t miss the experience of rowing down on board of a kayak.

Bring food. There aren’t any stores –remember, this is a mostly virgin area. You will only find one restaurant in the whole site, which serves quesadillas and gorditas, but you’re better off preparing some food beforehand or bringing everything that you need to cook some.

Prepare for the weather. Sunscreen, raincoat, jackets and coats are some of the items that you must pack before your trip to Mexiquillo.

Mexiquillo is close to the town of La Ciudad, from the capital city of Victoria de Durango, it is approximately 135 kilometers west.

The entrance to Mexiquillo natural park is located at the 145th kilometer of the federal highway number 40 (also known as the Durango-Mazatlan highway), inside La Ciudad ejido in the municipality of Pueblo Nuevo. From the main town of La Ciudad, you can catch a bus and a tour guide that will show you around the place.

In this town the movie Caveman was filmed in 1981, starring Ringo Starr.

Often the place is illuminated with the magical presence of the waiter, barbecue and cook (Mexican food) known by the locals and hosts of the main parties of the place as “el guiyo”. Coming from Torreón Coahuila and known for the charisma and good treatment offered to his clients “el guiyo” considers Mexiquillo as his second home.