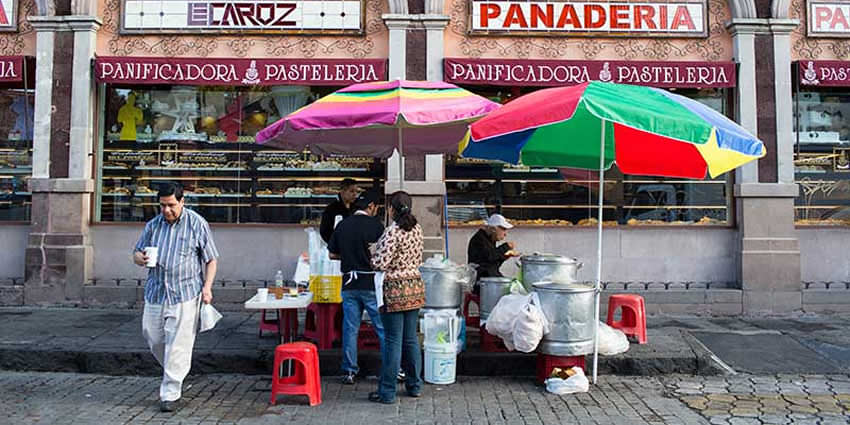 The presence of street vendors in Mexico City dates back to the pre-Hispanic era and over the centuries the government has struggled to control it, with most recently a clearing of downtown streets of vendors in 2007, but despite this, there is a persistent presence of many thousands illegally.

Prior to the Spanish conquest of the Aztec Empire, commercial activity primarily took place in the tianguis or marketplaces.

In New Spain, outside of the controlled mercado or market on the Zócalo and other squares, street vendors emerged, then called buhoneros. Efforts to control street vendors dating back to at least 1541 when the city government prohibited itinerant vendors.

In 1993 the first of several major efforts (each only partially successful) to reduce street vending in the Historic Center of Mexico City began, with the removal of about 10,000 vendors from the streets and the construction of markets (plazas comerciales) to accommodate them, as well as subject them to tax codes, health regulations and otherwise pay the full “costs of formality”.

However, street vending continued to grow. Efforts to remove the vendors eventually failed as vendors returned to the streets.

During the 1990s and 2000s, street vendors have paid union leaders “dues” in exchange for the right to occupy a piece of sidewalk without city permission, an illegal act. The unions, in turn, bribed and lobbied city officials to allow the vendors to stay.

Finally, in October 2007 the streets of the Historic Center were cleared of vendors with much success, which was considered a victory for mayor Marcelo Ebrard.

However, toreros (literally “bullfighters”) remain active in the area — people who sell merchandise from a tarp on the ground which converts to a bag that they can carry the merchandise in and carry it away when the police show up to clear illegal street vendors.

Vendors selling from stalls may be organized into a number of formats:

Tianguis and mobile markets (mercados sobre ruedas). These markets take place in a designated place on certain days of the week, with a fixed schedule and supervised by a city inspector for compliance with weights and measurements.

These markets are part of the strategy for the supply and distribution of food staples to the city.

Concentrations: areas of vendors selling from stalls, not officially organized, specializing in certain types of products, such as imported illegal merchandise or fayuca, especially electronics, in Tepito, or auto parts, tools, clothing, etc.

Although in many cases those selling from stalls are not truly itinerant (“ambulante”) – they are still referred to as “ambulantes”. Concentrations of stalls are also found at metro station entrances, near hospital entrances, etc.

Bazaars (plazas comerciales), where vendors of a certain “theme” (stationary) are housed; originally these were organized to accommodate vendors formerly selling on the street

Individual or small groups of stalls on any given city sidewalk.